Northern Arizona astronomy: Before nomadic worlds and other interstellar interlopers 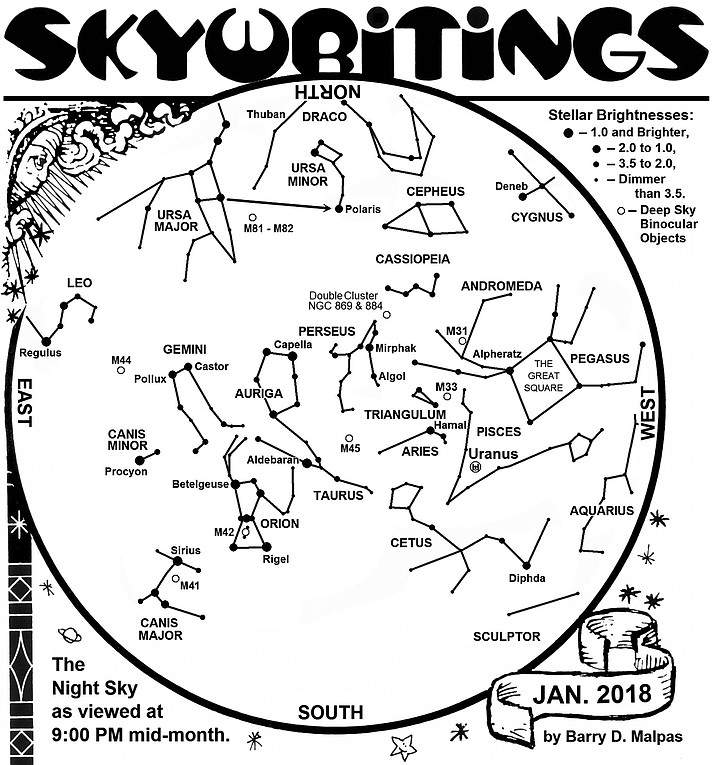 Up until the past two decades, with the advancement and introduction of highly sensitive digital cameras and other devices, astronomers were unable to detect planets around other stars, let alone dark objects far out in space.

Since these dark objects in space are not self luminous (therefore not stars), nor are they planets (the definition of planet requires they orbit a star) one might refer to them as nomadic worlds, massive non-visibly-luminous objects in space that orbit only the galactic center.

There are objects that do not give off much visible light known as Brown Dwarf stars. These objects have a mass no greater than 80 times that of Jupiter. This is the size required at which the gravitational forces are capable of producing enough crushing energy that matter will under-go nuclear fusion, where hydrogen begins burning into helium allowing them to give off visible light and be detected. However, between 80 and about 13 Jupiter masses would still be hot enough to be observed in the infrared (or heat) part of the spectrum. Below 13 Jupiter masses, although able to give off some heat, they would be candidates for planetary-like status, were they not without a star.

Since 1998, about a dozen such dark objects have been detected. Their masses range from about three to 15 Jupiters with most within 100 light years from Earth. How they came to be is still in question. They may have been orbiting around a star in which they had formed and been gravitationally ejected after being approached by some other massive object. Or they may have formed on their own, as stars do, by accreting nebular dust and gas, but never achieving the critical mass to undergo nuclear fusion.

Though we are limited to detecting these dark objects to our celestial neighborhood of about 200 light years, astronomers estimate there are probably many billions of them in our galaxy.

In all likelihood, they originate from both scenarios.

Recent spectroscopic observations of one object, known as OTS 44, reveal that the disk is actively accreting matter, in a manner similar to young stars, and is surrounded by a disk of about 10 Earth masses, which could eventually form its own moon system.

The closest nomadic world discovered is about seven light years from Earth and has a mass as much as 10 Jupiters.

But, there is other dark stuff out there. On Oct. 19, astronomers at the University of Hawaii noticed an unusual 20th-magnitude (extremely faint) object in the constellation Pisces on images taken with the 1.8-meter Pan-STARRS 1 telescope, which was soon verified by the European Space Agency telescope in the Canary Islands. Pooling their data it was determined the object was traveling extremely fast and it’s motion could not be explained as having a normal solar system asteroid orbit (neither elliptical nor parabolic), it became clear that the orbit was hyperbolic, which means that it had to have originated from outside of our solar system.

Astronomers were able to calculate its entire path through our solar system and on Sept. 2, it had crossed just inside Mercury’s orbit and came close to the Sun on Sept. 9. The Sun’s gravity sharply deflected its path and boosted its velocity. It swung close to Earth on Oct. 14 at a range of 15 million miles (24 million km), when it was moving across the sky at an astonishing clip of 12 degrees per day.

At its closest approach to the sun it was traveling at 196,000 mph (88 km/sec) then headed out in the direction of the constellation Pegasus.

The asteroid is cigar shaped, about 590 feet long and with a circumference of 150 feet. The Minor Planet Center has given this interstellar interloping asteroid the name Oumuamua, meaning scout or messenger in Hawaiian. Because of its extreme velocity and trajectory astronomers are confident this is a one-time passage through our solar system, never to return.

Every year several near earth objects (meteoroids, asteroids or comets), mostly from within our solar system, pass Earth closer than the distance of the moon, of which over 17,000 of a few feet in diameter up to hundreds of miles across are currently known and monitored by astronomers not only to study them scientifically, but to be able to see what’s coming, and if need be, to possibly deflect them early in hopes we do not end up like the dinosaurs.