Love ’em or hate ’em, we have to live with coyotes 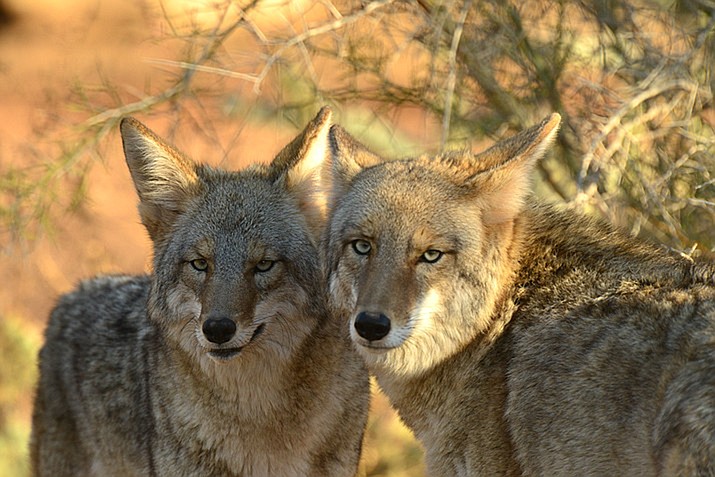 A pair of coyotes play in the desert.

It is uncommon for coyotes to attack or pursue humans. It is a learned response or indifference by the animal.

• Coyotes live throughout Arizona and in every state except Hawaii. Their range has expanded with the human removal of their predators, such as the wolf.

• They breed every year. They have two to 12 pups per litter, with an average of six. Pups are raised in a den.

• Coyotes may be seen in groups, called packs or alone.

• Removing coyotes from one area generally results in other coyotes moving in from surrounding areas and breeding faster.

GRAND CANYON, Ariz. — Live in this part of the world long enough, people are going to have some sort of run in with Canis latrans, or coyote. They’re an everyday sighting in northwestern Arizona, but there’s no way of knowing just how many roam the local desert.

“Coyotes are pretty common,” said Velma Holt, wildlife manager supervisor for Arizona Game and Fish Department. “There is no way of knowing how many, but they are readily available.”

In what seems as a forever hunt for food, coyotes are easily labeled as pests. They are curious, clever, and adaptable as they learn the surroundings of a newly discovered food source. It’s possible for coyotes to prey on livestock, but it is what humans leave behind that causes most of the problems.

Coyotes are roamers and are always seeking a food source. They’ve been known to eat pet food, knock over garbage cans, and even walk on top of walls around homes while searching. Coyotes like yards where quail or other wildlife are fed and can lead coyotes to hunt small pets like cats and dogs. But they do have things they fear.

“Coyotes are generally afraid of humans,” Holt said. “They don’t want to live where we live.”

If coyotes are not wanted around the homestead, the best thing to do is not have what attracts them in the nearby vicinity.

“Remove sources of food so coyotes don’t get used to eating around human homes,” Theimer said. “Thirty percent of coyote attacks are because they are being fed intentionally or unintentionally. Fencing is a good idea. That keeps a lot of wildlife problems at bay.”

AZGFD reports that intentional feeding is a big issue.

“There are people purposefully feeding the coyotes with leftovers,” Holt said. “That could be a problem for neighbors.”

The most important thing to be certain the food chain is broken surrounding the home.

“A lot of times people don’t see the chain effect,” Holt said. “If you create a larger density of coyote prey-species, you’ll be attracting more. You could even attract mountain lions.”

There is a large segment of the population who want coyotes hunted in order to preserve some of the smaller animals, especially pronghorn fawns.

“Studies in other places suggest that if you remove coyotes you will have a big effect on rodents, rabbits and bobcat. Those populations will probably go up,” said Tad Theimer, Northern Arizona University’s Biological Sciences Department chair. “It can produce an increase with pronghorn fawns, but that’s an assumption and hasn’t been proven.”