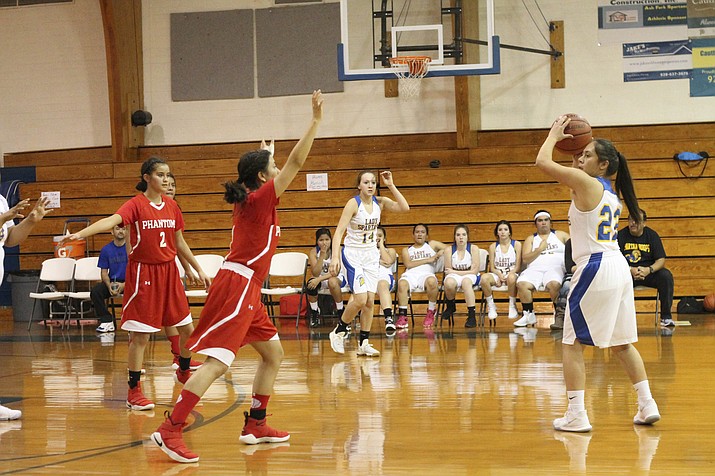 GRAND CANYON, Ariz. — The Lady Phantoms’ undefeated streak came to an end Dec. 15 as they lost a close game 60-55 to 1A Central rival Mogollon in Heber, Arizona.

The Mustangs jumped out to an early 11-point lead in the first quarter, but the Lady Phantoms outscored the Mustangs in the second quarter to pull within five points at the half. The Mustangs widened their lead behind Hannah Ballesteros, who lead all scorers with 18 points. The Lady Phantoms went on an 8-0 run in the fourth corner, but time ran out before they could even the score.

Sophomore Cayli Miles led the charge for the Lady Phantoms with 15 points, followed by senior Meme Jeter-Nanacasia with 12 points, include two 3-pointers. Sophomore Savannah Longhoma had 10 points and eightrebounds, including six offensive rebounds.

The Lady Phantoms followed the loss with a resurgent win, 61-35, over the Joseph City Wildcats Dec. 16 at home. The outcome of the game was never in doubt as the Lady Phantoms outscored the Wildcats in every quarter.

Longhoma led all scorers with 16 points and six steals. Miles and Jeter-Nanacasia again rounded out the top three for the Lady Phantoms with 11 and 9 points. Senior Monica Dimas-Gonzales scored seven points, hauled in five rebounds and had five steals.

The Lady Phantoms are ranked fourth in the 1A Central region behind Mogollon, Cibeque and Williams. The team will be back in action Jan. 6 against the Mayer Wildcats at Grand Canyon.