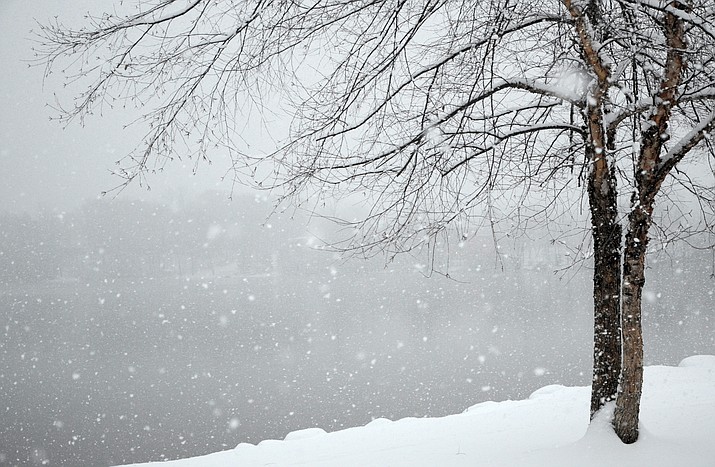 A winter storm is predicted to bring 4-6 inches of snow Tuesday night, Feb. 27.

A Winter Weather Advisory is in effect from 5 p.m. this afternoon to 5 a.m. Wednesday morning from the Kaibab Plateau southeast to the Eastern Mogollon Rim.

The National Weather Service reports winds will increase this afternoon beginning around 11 a.m. ahead of the approaching storm. A Wind Advisory is in effect for this area from 11 a.m. this morning through 5 p.m. this afternoon.

Rain and snow showers arrive along the western border of Yavapai and Coconino Counties around midday Tuesday, before moving eastward through Wednesday morning. Current timing of showers: Prescott area between 2 to 5 p.m., Williams and Flagstaff between 4 to 6 p.m., Payson between 5 to 8 p.m., Winslow between 7 to 10 p.m., Show Low between 8 p.m. and 11 p.m., and the White Mountains and Window Rock between 11 p.m. and 2 a.m.

Snow levels are forecast to drop to as low as 3500 feet behind the front. Accumulating snow is forecast above 4500 feet. The general snowfall forecast is as follows: Trace to 3 inches from 4500 to 6000 feet, 3 to 7 inches above 6000 feet, locally higher amounts over the highest mountain peaks.

Following is the detailed National Weather Service forecast for Williams:

A 30 percent chance of snow showers. Increasing clouds, with a temperature falling to around 34 by 5pm. Breezy, with a south wind 21 to 23 mph, with gusts as high as 34 mph. Total daytime snow accumulation of less than one inch possible.

Snow showers. Some thunder is also possible. Low around 22. South southwest wind around 8 mph. Chance of precipitation is 100%. New snow accumulation of 4 to 6 inches possible.

A 40 percent chance of snow showers, mainly before 11am. Mostly cloudy, then gradually becoming sunny, with a high near 36. West wind 7 to 10 mph. New snow accumulation of less than a half inch possible.

Partly cloudy, with a low around 22. West southwest wind 5 to 8 mph becoming south southeast after midnight