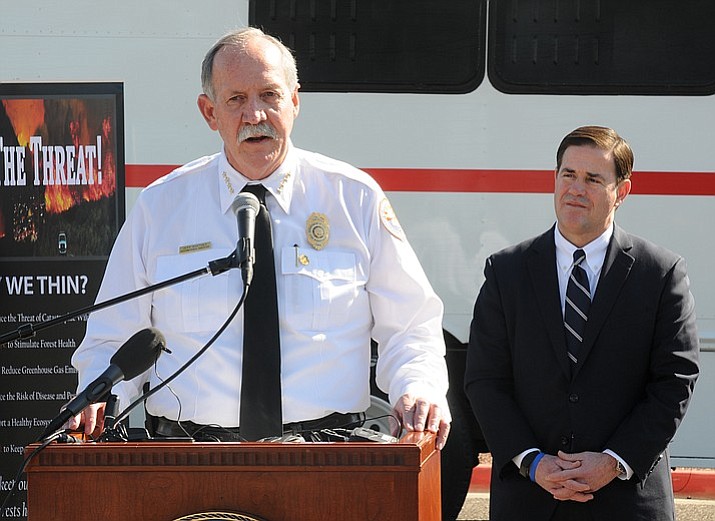 PHOENIX — In addition to the ongoing dry winter, last year’s unusually intense monsoon precipitation will also contribute to increased fire danger in Arizona this year, according to the state’s forester, Jeff Whitney.

Whitney, along with Gov. Doug Ducey, spoke at the annual wildfire season outlook press conference, held in Phoenix, Feb. 22. Normally, this press conference is held in mid-April, but they wanted to get the warning out earlier this year.

“We need everyone’s help to prevent what could be a very difficult fire season,” Ducey said.

Whitney acknowledged that winter rains this year have been a fraction of what is normal. Usually the winter rains lead to abundant growth of grasses, which, once they dry out, become fuel for wildland fires.

But Whitney said that’s only part of what creates fire hazards.

“The finer fuels that provide so much of a challenge for us across all elevations in Arizona are primarily dependent on spring moisture, but even more so on summer monsoons,” he said.

“Last year’s summer monsoon season was very strong,” he explained, referring to the summer’s unusually heavy rainfall. “And then we had 120 days without any measurable precipitation anywhere in the state.”

In the extensive fire season last year, more than twice as many acres burned as in the prior year, Whitney said.

But the fire wasn’t all that happened, he said: “Because of the monsoons, everything that burned regrew.”

Subsequently, there were four months with no rain, and only light precipitation to date.

“The climactic outlook for the next three months is quite alarming,” Whitney said. “Not only are we in a bad way, but everything, at least in the grassland communities that burned last year, regrew.”

And it isn’t just grasses.

“Chaparral is stressed — ponderosa pine and pinion juniper lands, they’re all stressed at this point because of the drought,” Whitney said.

Given the circumstances, Ducey is asking Arizonans to be especially cautious about fire this year.

“So commonsense ideas — like making sure camp fires, cigarettes and matches are out cold before you walk away from them, and make sure your trailer chains don’t drag,” the governor said. “Any spark can start a fire.

“I can’t say it strongly enough. I want people to be extra cautious this season.”

Ducey last month asked the legislature to set aside $2 million for wildfire prevention this coming budget year, which begins in July.

His request was double the amount allocated in the ongoing fiscal year. The additional dollars would be used to remove brush and other dangerous fuels.

The Governor’s Office also said it has identified $640,000 in federal money that can be used to prepare forests for timber thinning.

If that money comes through, Whitney said he hopes to spread those dollars evenly across the state’s five districts (northwest, northeast, southwest, southeast, and central).

While he indicated there were some areas of the state in particular need of attention, he would not specify where those areas are aside from saying they’re on the priority list.

“We’ve hit refresh on our communities-at-risk list and have literally doubled the number of communities at risk, and we do prioritize those,” Whitney said.

“Literally, this year, there is no one that can become complacent as far as the fire threat.”