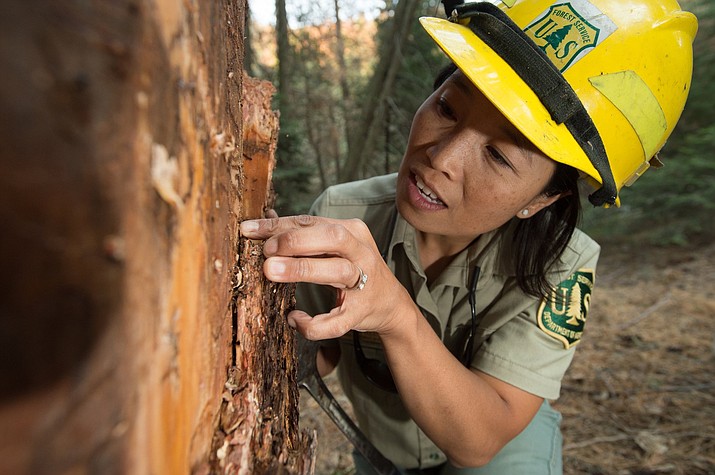 Bark beetles lay their eggs in the inner bark, or phloem. When the larvae emerge, they eat their way outward and eventually drill through the outer bark, causing the galleries and holes pictured. (Photo by L. Shyamal, Creative Commons 3.0 https://goo.gl/3Zc655)

GRAND CANYON, Ariz. — The bright flames of a raging wildfire and the aftermath it leaves behind may cause many to think that the biggest forest danger in the west is unrestrained fire, but the reality is actually much quieter and much, much smaller.

Mountain pine bark beetles are only about five millimeters long, about the size of a single grain of rice. They feed and reproduce on the inner bark of ponderosa pines, among others, which creates a maze-like formation of tubes or tunnels in the wood. These tubes effectively block the flow of nutrients from the needles to the rest of the tree, causing damage. The beetles can also carry a fungus that prevents water from the root system from reaching the needles, leading to even more damage.

A study by the U.S. Department of Agriculture (USDA) estimates that about 100,000 trees are felled daily because of beetle damage. In Colorado and California, entire swaths of forests have been decimated by an infestation of the insects.

And yet, bark beetles are not forest destroyers in normal numbers. In fact, they most often colonize dead or dying trees, speeding up the process of decomposition and recycling of dead wood in the forests.

However, bark beetle numbers have swelled in recent years to outbreak proportions, and there are many factors affecting its spread, from natural occurrences like drought to human activity like fire suppression, forest management practices and climate change.

Arizona has been party to an extended drought in the Southwest, which makes for stressed trees, and stressed trees are more likely to be attacked and killed by bark beetles than healthy trees. When water is lacking, in both drought conditions and because of stands that have become too dense, pines give off turpenes that bark beetles have evolved to detect. If a beetle detects turpenes, if then emits its own chemical signature to draw more beetles to the host tree, which can then be colonized by thousands of insects.

Lack of forest thinning and fire suppression lead to much denser forests, and once a colony of bark beetles has infested one location, it can easily spread to nearby trees, sometimes flying up to two miles. Large swaths of untreated forests can fall in a few months if enough bark beetles are drawn to the area.

While climate change is seen as a contributor to drought conditions plaguing to Southwest, it can also be a direct contributor to bark beetle colonies. A study published by the Yale School of Forestry and Environmental Studies found that even slightly longer warm seasons, in both the U.S. and Europe, can lead to a longer breeding season for the beetles, which typically emerge around the beginning of April in Arizona. A longer breeding season can mean at least one more generation of bark beetles.

The beetles are becoming more aggressive, too. In addition to devouring trees normally found within their ranges, mountain pine beetles crossed the border into Canada, feasting on jack pines in Alberta for the first time in 2011. The research group led by the University of Alberta estimated that once the beetle found its way into Canada’s far-reaching boreal forests, it could move as far as the central high plains of the U.S. and even onward to the Atlantic coast by species-jumping.

Closer to home, forest service entomologist Monica Gaylord and Northern Arizona University professor Rich Hofstetter have teamed up to find a solution to the problem before it fully takes hold in northern Arizona.

Dead, dying and falling trees can be dangerous to visitors who recreate in the national forests, and large swaths of reddish-brown pines aren’t exactly a picturesque getaway for campers looking to hike and enjoy some of the last remaining wild places.

In 2015, Hofstetter and Gaylord developed a potential solution: using a fungus called Beauveria bassiana kill the beetles themselves before they can kill a tree. When spores of the fungus come in contact with the cuticle (skin) of susceptible insects, they germinate and grow directly through the cuticle to the inner body of their host. The fungus reproduces throughout the insect’s body, producing toxins and draining the insect of nutrients, eventually killing it. And it doesn’t feast on trees or plants.

Montana BioAgriculture grows the spores and sends them to Hofstetter, who then puts them in a liquid formula to be sprayed on tree trunks and logs. Hofstetter said he saw an 80 to 90 percent mortality rate from the spray.

“We see an increase in activity after disturbances like a wildfire,” Gaylord said.

Areas like the White Mountains are experiencing an outbreak in the wake of the 2011 Wallow Fire that burned through the area. Gaylord said it’s not uncommon to see outbreaks after such disturbances.

Gaylord said the fungal solution is a way to suppress bark beetle populations, preventing them from rising to outbreak levels.