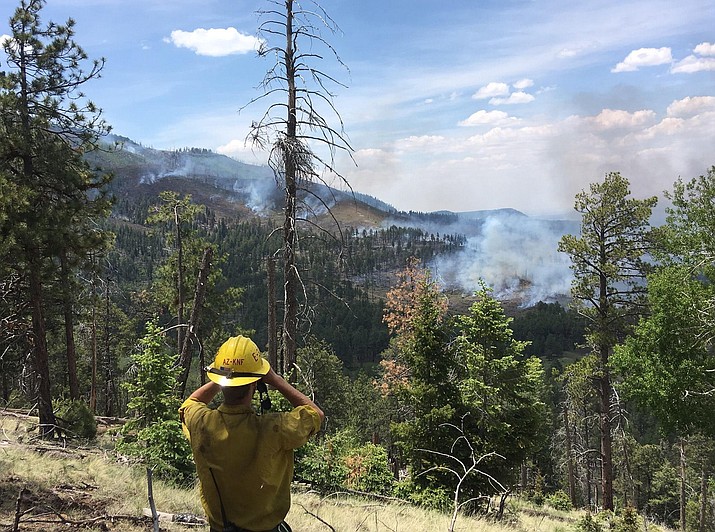 Kaibab National Forest managers are concerned with the lack of precipitation this winter in northern Arizona. The low levels are mimicking levels of 1996 and 2006, which were big fire years for the forest. (U.S. Forest Service)

It’s not surprising with the numerous 65 degree days and lack of snow in Williams that La Niña has brought one of the driest winters on record to Arizona. It could also be a sign that an especially volatile wildfire season is on the horizon.

The lack of precipitation on Kaibab National Forest has made 2017-2018 the second driest winter in the past 25 years.

Data from Kaibab National Forest reveals the correlation between precipitation and acres burned by wildfires. Forest managers are concerned with low precipitation levels this winter which are mimicking levels of 1996 and 2006, which were big wildfire years. (Chart and data Drew Leiendecker, USFS)

“We are almost tied with the driest, which was in 1996,” said Drew Leiendecker, Forest Fuels Specialist with Kaibab National Forest.

Leiendecker said the Kaibab only received 1.15 inches of precipitation this winter, which is 3.36 inches behind the average. He said the area needs 7.4 inches of rain this spring to catch up to the average by June, which is the beginning of the typical wildfire season.

Leiendecker said the snowpack on the Kaibab is 15-20 percent below average also.

“Snow soaks in instead of running off like moisture does,” Leiendecker said. “There is a delayed release so you’re still putting moisture into the system after the storm has passed.”

“Those four fires are in the top seven of our total fires we’ve ever had on the forest and we’re shaping up at this point like those years,” Leiendecker said.

Leiendecker said if dry conditions continue, the Kaibab could see a lot of wildfires. However, even if the region stays below average for precipitation, an early monsoon season could put a damper on ignitions.

“The key is going to be the start of the monsoons,” he said. “Even a little bit of moisture will moderate conditions, and if you get in that pattern every couple weeks, you can limp through fire season without having a big potential.”

Leiendecker said light amounts of moisture will be absorbed by fine fuels such as grasses and limit ignitions in the forest.

However, the persistent drought conditions seen in the southwest continue to have an effect on the wildfire potential.

Despite above average precipitation in 2016 and 2017, Arizona is in the 21st year of a long-term drought, according to the Arizona State Climate Office.

“We definitely have a cumulative drought still impacting us,” Leiendecker said. “Where we are seeing that is in our live fuels moisture.”

The live fuels — such as standing ponderosa pines — are complex. An increase in seasonal moisture does not necessarily equal increase moisture in the live fuels because of the “phenology” or life cycle of various trees and shrubs. Timing and amount can have big impacts as to whether or not the live fuels respond. The cumulative drought, along with fluctuating weather patterns outside of the historical, has impacted dead and live fuels on the Kaibab.

“95 percent of the large wildfires are lightning caused,” he said. “Human factor is a small role in that, but it’s still a role.”

Leiendecker said even with below average precipitation and ideal wildfire conditions, without lightning strikes and accidental ignitions fires could be limited.

“Out of those three factors, it is the only thing we have some control over,” he said. “Locally we are pretty mindful, the community is pretty mindful of being careful with fire in the woods.”

Of all the fires on the Kaibab, 22 percent are human caused.

“As the population around the state grows, we’re seeing more visitors around the Kaibab,” Leiendecker said. “They may not have as much education and knowledge about how to be careful with fire.”

Human said his staff hopes to spend a portion of the spring getting out the message about fire prevention. He said despite a potentially big fire season on the Kaibab, the forest has limited funding for hiring more firefighters.

“We can’t bring on extra engines or hire extra seasonals,” he said. “We may have our lookout staffing on earlier and the region as a whole may have resources such as airtankers and helicopters pre-positioned because of the anticipated activity in the deserts.”

Human said that Fire Severity Funding is available though for preparedness and suppression actions needed for extreme fire conditions.

“That funding is available if the need arises so we can bring outside resources in to support us,” he said.

Human said one advantage of the mild winter is the opportunity for more restoration efforts. The Kaibab typically conducts its prescribed fire season in the fall, but the dry conditions are allowing them to complete more prescriptions.

“We normally can’t do it at this time of year, so we’ll continue to treat and look for those opportunities between wind events and the dry fuels conditions to meet ecological benefits and keep fire on the landscape,” he said.

Because of the exceptionally dry winter, Gov. Doug Ducey has asked the Legislature to increase funding for fire prevention efforts in the upcoming budget.

Ducey’s office announced it wants funding to double for removal of brush and other fuels because of the ongoing drought. He has asked to increase the $1 million allocated to $2 million.

He is also identifying $640,000 in federal money for timber thinning projects.

According to the National Interagency Fire Center, the forecast is above normal for wildfire for northern Arizona for May. The expectation is for temperatures to generally remain warmer than average with drier than average conditions for most areas of Arizona. Despite this, there is some potential for deep, wet storm systems to impact the region from March to May, especially in the northern half of the state.

Arizona’s monsoon is the northern extent of the North American Monsoon, which begins in early June in central and southern Mexico.The monsoon is a season during which the dry westerly winds that persist through fall, winter and spring shift to moist southerly winds, bringing thunderstorm activity into Arizona.