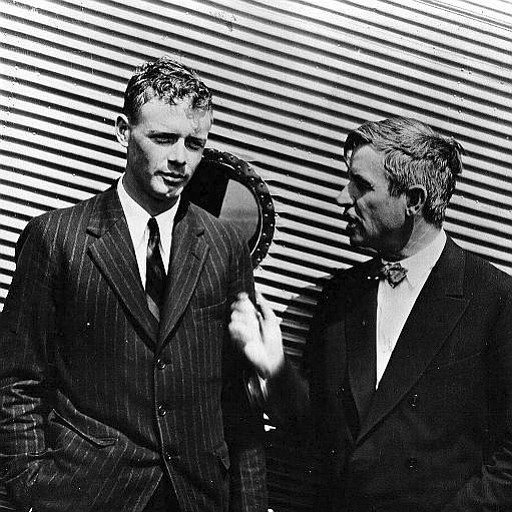 Charles Lindbergh and Will Rogers stand with a Ford Tri-Motor at the Grand Canyon Red Butte Airport during the summer of 1928. (Photo/AZ Historical Society)

Charles Lindbergh landed in Williams in April of 1928. The front page of the April 27, 1928 edition of The Williams News reveals the expectations the community had regarding the Williams airport becoming a stop on the new transcontinental airline.

WILLIAMS, Ariz — In 1927, Charles Lindbergh became the first aviator to make a solo nonstop flight across the Atlantic Ocean.

The boom in aviation that followed was attributed to Lindbergh. The volume of mail moving by air increased 50 percent within six months, applications for pilots’ licenses tripled and the number of planes quadrupled.

In 1928, Lindbergh headlined the April 20 edition of The Williams News when he, along with H.M. Bixby and H.H. Knight, landed his new Ryan BI B. Mahoney Aircraft Corporation (NX4251) monoplane unannounced at Webber Field, the present-day rodeo grounds, in Williams.

Charles Lindbergh inspects his plane at Webber Field in Williams in 1928. This photo is a different plane than what is on the front page of the April 27, 1928 edition of The Williams News. (Williams Library Historical Photo Archive)

Although Lindbergh and his crew were mum on the purpose of their trip, The News believed the crew was scouting in the interest of a great transcontinental airline then under contemplation. The press also believed they were gathering information that would be of use to the government as well as others interested in aviation.

The News stated that seldom had the people of Williams received such a thrill as when Lindbergh dropped in on the little mountain town.

“The first inkling the townsfolk had that anyone intended to land at the local airfield was the roar of an airplane engine heard overhead. Next, signal lights were seen flashing from the plane,” The News said.

Lindbergh found himself surrounded by throngs of fans in Williams and seemed disappointed with the attention.

“Some have complained that he ignored the crowd too much," The News said. "It was plain to see that he would have preferred not be bothered on this particular trip, yet he spoke quietly and politely when requested for the hundredth time, “Please keep your hands off the fabric of the plane.”

The impression many witnesses in Williams got of Lindbergh was probably accurate. The famed aviator was shy, to the point of being rude. By the time he made the landing in Williams, the transoceanic flight had made him so idolized he was mobbed where ever he went. He had begun taking steps to avoid crowds — even if it meant rudeness.

Isabella Greenway poses in front a Charles Lindbergh's plane in Williams. The plane is different than the one that appears on the front page of the April 27, 1928 Williams News, and some locals report that Lindbergh came to Williams more than once over the years. Greenway is best known as the first U.S. congresswoman in Arizona history, and who also had a vacation home at Hat Ranch west of Williams. (Williams Library Historical Photo Archive)

“Tell the people of Williams that I appreciate their reception given me here, and particularly I want to thank those who turned their lights on the runway at the aviation field. I found it hard to locate the field after night, and those automobile lights were a big help. Your field is good and landing was easy once I had located the runway. As for making any improvements on your field, well, you will hear from Washington regarding that.”

When Lindbergh began preparations to leave Williams on Saturday morning, he flew north without his passengers and the crowd became concerned when he didn’t return. Some drove their Chryslers and Model-Ts cross-country to find the aviator, and a brave few hiked several miles to eventually find the plane resting in a field.

When they arrived at the plane, the words “Gone to dinner” were written on the door.

It was obvious the plane had landed without a hitch and the aviator had disappeared for some peace and quiet.

The News said “So just where was the coffee shop the aviator seemed to have found?”

Later it was determined that Lindbergh came across homesteader Oliver Morrow “replenishing his larder with winsome bunnies from the range,” in the field where he landed his plane.

Morrow told The News that his wife then invited Lindbergh to dinner.

Several news outlets reported that Lindbergh landed in Williams because of a forced landing, which The Williams News denied. Other papers said the plane was damaged when landing in Williams.

“That statement was falsehood without even a straw to build on,” said The News.

Apparently the nose cap on the plane did come loose, but Lindbergh wasn’t too concerned and gave the cap to W.L. Lindblom, the secretary of the Williams-Grand Canyon Chamber of Commerce, as a souvenir.

Other reports state that after Lindbergh departed Webber Field on Saturday, he was forced to land three miles north of Williams at Dry Lake, because of a heavy load. Later, Lindbergh recommended the Dry Lake area would be a better air field than the present Webber Field.

At that time, Lindbergh was the chairman for the technical committee for Transcontinental Air Transport (TAT), an innovative airline planning to carry passengers from coast to coast. Lindbergh was assigned to map the exact route.

The News reported Lindbergh’s landing could be important for the development of aviation in the area. The community believed the result could be Webber Field being made into an important airport for trans-continental air travel.

However, it became apparent after several months that Williams would not be a stop for the new TAT airline, as Lindbergh took special interest in an area at Winslow.

Other news sources said plans for a great trans-continental airline included building large hangars along the route at convenient and strategic points. The community was sure that Lindbergh’s landing in Williams was proof the local field had been picked for one of those hangars.

In 1929, Winslow was chosen as one of twelve critical refueling stops on the nation’s first transcontinental passenger airline. By July of that year, TAT began flying passengers from New York to Los Angeles on a journey that took about 48 hours. The one-way fare was $336 to $403, according to information from the Winslow airport.

Lindbergh was the pilot for the inaugural flight of the new TAT route. He flew the first eastbound Tri-Motor from Los Angeles, spent the night in Winslow, then took off in the first westbound aircraft, landed in Kingman and then returned to Los Angeles.

The Willliams News will feature several articles in the following weeks covering aviation history in the area.