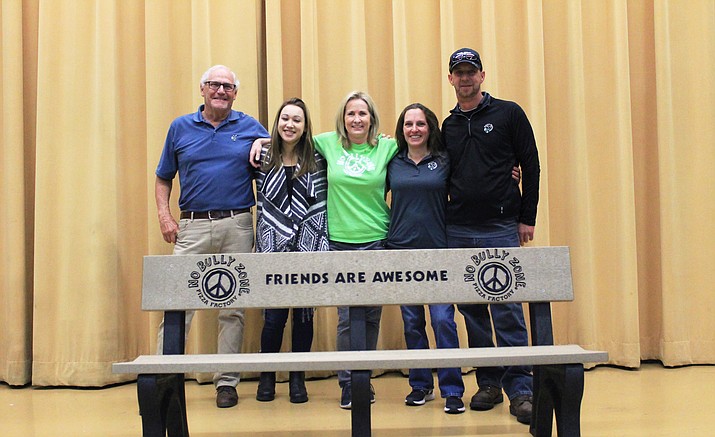 With the donation of a new Buddy Bench, Pizza Factory and Williams Elementary-Middle School are hoping to eliminate bullying by creating a “No Bully Zone,” at the school and creating a friend zone where lonely students can connect with others.

The company, which has one of its 110 franchises located in the town, used the unveiling as an opportunity to talk to the students about bullying and what they can do combat it.

“When I was growing up the bullying wasn’t recognized as much as it now, so this is a great way to initiate a place to them a place to start,” said Derrick Wortner, Williams Pizza Factory owner.

“We also give each school a flash drive with free programs and activities for the kids to engage in, to try get them to talk about it,” said Mary Jane Riva, the CEO of the Pizza Factory franchise.

Pizza factory guy said Pizza Factoring also has anti-bullying messages on their menus and coloring pages at the restaurant.

“We want them to have conversations with their parents,” Riva said. “It’s a lot more than the just the bench.”

Riva said her son was bullied a lot as a child and she and her husband were unaware.

“Kids don’t tell,” she said. “We’re trying to get that conversation going and the message out that it’s okay to tell somebody.”

Riva began the program in 2009 in Temecula, California, and then introduced the program company-wide after becoming CEO in 2012. She said each of the 110 franchises selects a school each year to partner with to stop bullying.

In an assembly Jan. 23 at the school, Riva joined with Derrick Wortner and his wife Kendra and unveiled the bench, engraved with the words “Friends Are Awesome/”

They joined students from the school and acted out a skit to demonstrate how to meet new students, then Riva addressed the students.

Riva told the students that excluding people is another form of bullying and encouraged them to make a difference by being kind to everyone.

As the students filed into the gym, Riva and the Wortners handed each student a bracelet signifying a commitment to being kind.

The bracelet represents a commitment by the school, the community and the students that being kind can change lives, Riva said.

The bench will be placed on the school playground.