Northern Arizona astronomy: Serendipity and the discovery of Uranus 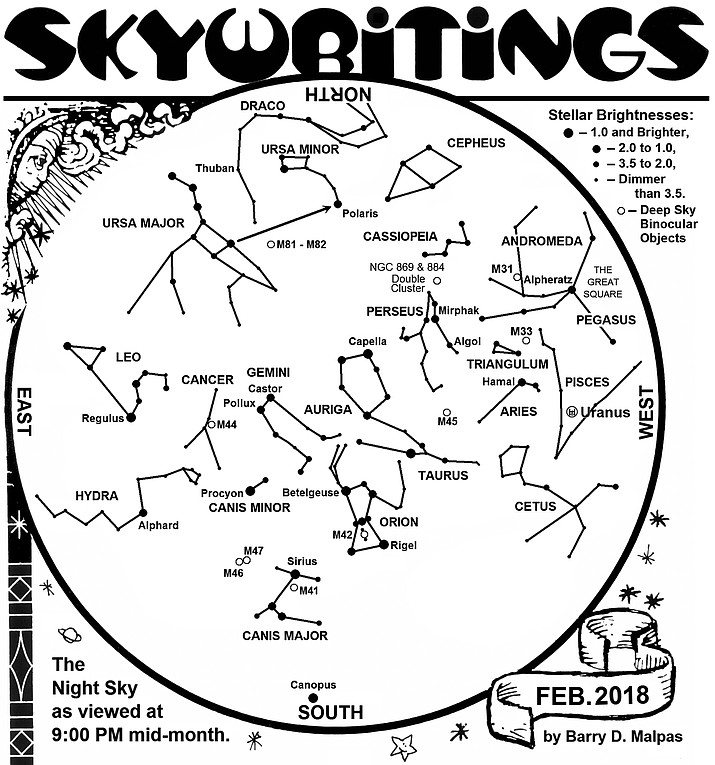 Although astronomers, among scientists in general, like to adhere to the scientific method for discovery, sometimes it doesn’t happen that way. Sometimes scientists will serendipitously trip over discoveries without even looking for them.

So, what is serendipity? The term was first coined by Horace Walpole in 1754 in reference to a Persian fairy tale, “The Three Princes of Serendip” (now Sri Lanka), who were always making accidental discoveries of things which they were not in quest of. The term is now defined as: an aptitude for making desirable discoveries by accident; or a fortunate or happy discovery made by unplanned coincidence.

The idea of looking for one thing and finding another has been a relatively common occurrence throughout the history of science. For instance, in 1928, Alexander Fleming noticed that the contamination of a fungus in one of his bacterial cultures had killed the bacteria. In so doing, he had discovered Penicillin. In 1945, engineer Percy Spencer, who was studying energy sources for radar equipment, realized that during an experiment the chocolate bar in his pocket was melting, which resulted in the “Radar Range.” Microwave cooking was born.

What about the planet Uranus? On March 13, 1781, an unusual object was discovered in the constellation Taurus by William Herschel, with his sister Caroline, from the garden of their house in Bath, England through a telescope of William’s own design. However, Herschel had not been looking for planets. He was determined to catalog most of the stars in the sky with his newest telescope. Over the next four days, Herschel continued to observe the curious object, thinking it to be either a nebulous star or a comet.

Noticing it increased in size with higher magnifications, and that its location moved, he reported to the Royal Society the discovery of a new comet. Along with Herschel’s further observations, and those made by other astronomers around Europe over the next two years, it became evident that this comet was actually a new major planet in our solar system, which Herschel subsequently named “Georgium Sidus” in honor of his patron, King George III.

But this is actually just part of the story.

In fact, Uranus had been observed through telescopes at least 22 times between 1690 and 1771 by four separate observers while each time being catalogued as a star. The earliest telescopic sighting was in 1690, when the first English Astronomer Royal, John Flamsteed, viewed it at least six times, cataloging it as 34 Tauri. But the seventh planet, though faint, can actually be seen without the aid of a telescope because it is a bit brighter than the limit of the unaided eye at magnitude 5.5.

The earliest known observation was possibly made by the Greek astronomer Hipparchus in 128 BCE, who is believed to have recorded it as a star in the constellation Virgo for his star catalogue that was later incorporated into Ptolemy’s Almagest.

One of the observers that viewed Uranus the most was French astronomer Pierre Le Monnier, who recorded it eight times in four weeks between Dec. 27, 1768 and Jan. 23, 1769. Historically, he has often been ridiculed for not having noticed the orbital motion and realized that it was not a star. However, between those dates, Earth’s orbit around the sun kept Uranus almost stationary in relation to the much further background stars, moving less than one second of arc. Hence, Le Monnier would not have been able to notice any planetary orbital motion.

Though Herschel had named the new planet after King George, others, not wanting it to be connected with a British monarch, preferred it be named Herschel. Over 70 years it was bantered back and forth between Herschel and a Greek god designation in keeping with the other planet names. Even the name Neptune had been suggested. But by the mid-1800s, its official name had been accepted by the astronomical community as Uranus, though its symbol designation still includes the letter “H” in honor of Herschel.

The next major planet would not be discovered until 1846. Because of discrepancies in predicting Uranus’s orbit, French astronomer Urbain Le Verrier calculated where the position of an unknown planet should be located based on gravitational perturbations. He then convinced Berlin Observatory astronomer Johann Galle to find it. It was located only one degree from Le Verrier’s predicted position. Interestingly, this new planet, Neptune, had also been previously observed and recorded as a star several times, including in 1612 and 1613 by Galileo.

Caroline Herschel learned of this second major planetary discovery two years before she died at age 98. Had it not been for serendipity, with Herschel accidently discovering a comet while looking to plot stellar positions in 1781, much of the solar system might not have been discovered for a long time.