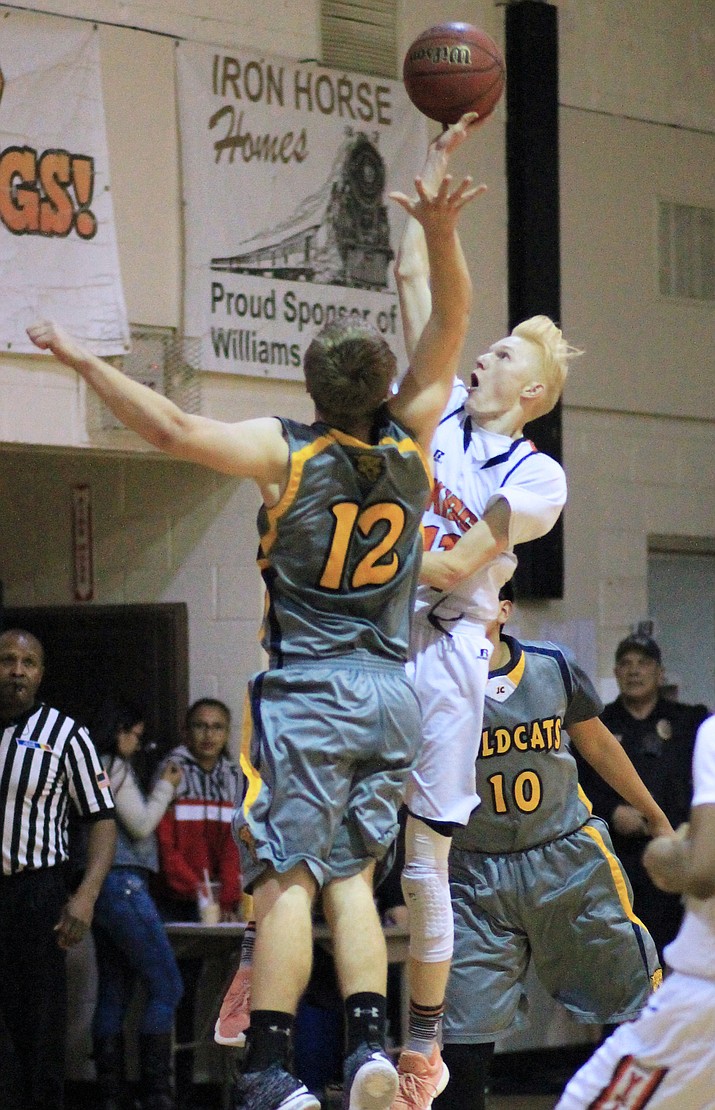 Viking Payce Mortensen lays up a shot in an earlier season game. Mortensen made 41 points Feb. 1 in a game against Mogollon.

After a sluggish first half, with the Mogollon Mustangs outscoring Williams 17-14 in the first quarter and 14-12 in the second, the Vikings emerged from the half fired-up, outscoring the Mustangs 24-15 and 23-17 to finish the game with a 75-61 win. 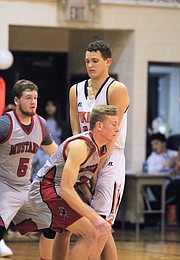 Will McMenamin sets a screen during the Williams - Mogollon game Feb. 1.

Senior Viking Payce Mortensen led the team with six points in the first quarter, but quickly got into foul trouble, sitting out the the second quarter.

With some most likely unwanted second quarter rest and a brief half-time lull, Mortensen returned to the game in the third quarter to light up the boards with 18 points and bring the Vikings the lead for the first time in the game with a dramatic steal for two points followed by an and — 1 to bring the Vikings up 41-39.

Mortensen finished the quarter with four 3-pointers and went 5 for 5 from the free throw line.

The Vikings finished the third quarter with a 52-44 cushion as they headed into the fourth.

The persistent Mustangs ,behind sharpshooter John Zent, tried to keep pace with the Vikings in the fourth, but Mortensen continued to make buckets in dramatic fashion.

Zent, with his honed fade-away jumper, put two baskets up for the Mustangs at the beginning of the fourth, but strong rebounding and on-target free throws from Will McMenamin kept the damage to a minimum.

Mortensen, not losing his momentum, made four 3-pointers in a row, stunning the Mustangs with just three minutes to go in the game.

Mortensen finished the game shooting 7 for 11 in 3-pointers, 6 for 11 in field goals and went 8 for 11 from the free throw line.

Juaquin Gutierrez led the defense for the team, bringing down nine rebounds, five assists, one steal and two turn-overs.

Offensively, he scored 12 points for the team, including one 3-point shot, and went 5 for 6 from the free throw line.

Zack Perkins scored eight points for the Vikings, making 80 percent of his shots at 4 for 5. He had four rebounds and forced two turnovers.

McMenamin scored seven points, had five rebounds, went 3 for 4 in free throws and made 2 for 3 in field goals.

The Lady Vikings were led by Amaryssa Orozco, who scored 10 points for the team going 5 for 8 from the floor.

The Vikings head into the 1A Central regional tournament this week.

The Lady Vikes play Joseph City on the road, and the Vikings boys hosted Basis Feb. 6 at home.

The winners of the regional tournament will automatically play in the first round of the state tournament.

The Vikings boys are currently in fifth place and are guaranteed a spot at state.

The Lady Vikings are currently in 16th place and are still vying for a state playoff spot.