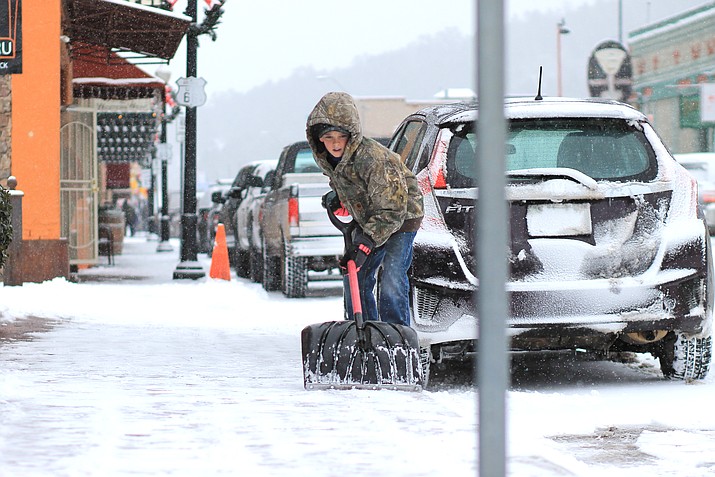 Jace Maebe takes care of shoveling in front of his parent's business, Brewed Awakenings, on Route 66 in Williams Dec. 31. The National Weather Service forecasts 4-6" of snow for Williams.

There is a chance of snow showers after 11 p.m. New snow accumulation of less than one inch possible. It will be mostly cloudy, with a low around 8. North wind 5 to 7 mph. Chance of precipitation is 60%. Tomorrow there is 20 percent chance of snow showers. It will be mostly sunny, with a high near 25. Wind chill values as low as -2. North wind 6 to 9 mph.

Snow is falling in Williams. A cold front is moving through the Four-Corners area with varying amounts of snowfall.

Storm totals according to the National Weather Service.

Snow showers began along the Utah border early this morning, Dec. 31, in Williams and, according to the National Weather Service in Bellemont, will spread southeastward to include most of northern Arizona by early this evening. The heaviest snow will occur over Coconino and Yavapai counties this afternoon, with the heaviest snow shifting east into Gila, Navajo and Apache counties late tonight. Snow fall totals are 4-10 inches at elevations about 6,000 feet. Williams and Grand Canyon are expected to receive 4-6 inches; the North Rim could receive 8-12 inches. Flagstaff is forecast for 6-8 inches. The Alpine and Show Low areas are expected to receive the brunt of the storm, with 8-12 inches predicted.

Snow showers will continue primarily from Flagstaff north and northeast to the Four Corners and the New Mexico border ending in the late morning. Snow will gradually taper off from west to east over Gila, Navajo and Apache counties throughout the day.

Cold temperatures are forecast for early Wednesday morning with wind chill oving the temperatures into the negative single digits to the negative teens for the Mogollon Rim including Grand Canyon Village, Williams, Flagstaff, Forest Lakes, Show Low and Greer. The Navajo and Hopi reservations will see wind chills in the -5 to +5 degree range.

Dry conditions and a warming trend are forest through the end of the week.