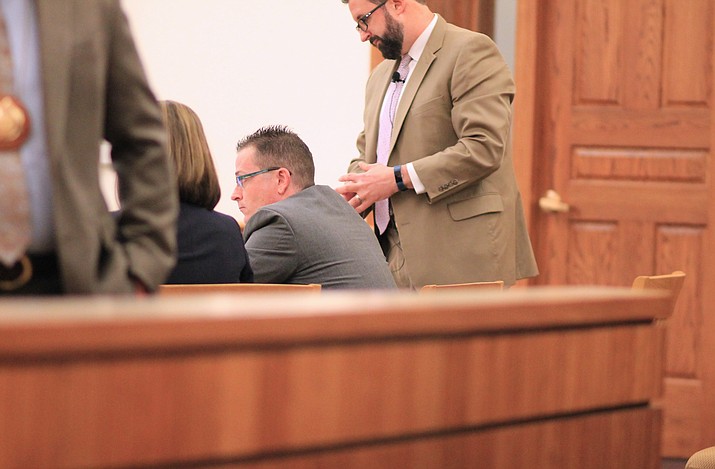 Jowell Gutierrez waits in court during his trial for shooting at Williams Police officers in November 2017.

WILLIAMS, Ariz. — The trial for a man accused of shooting at Williams Police officers on Nov. 27, 2017 concluded Dec. 21 with the jury finding Jowell Gutierrez guilty on three counts, but undecided on the most serious charges of attempted first degree murder.

Gutierrez was found guilty of two counts of aggravated assault against WPD officers Jerry Wilson and Robert Anderson and one count of criminal damage between $2,000 and $10,000.

The jury was hung on the charges of attempted first degree murder of law enforcement. The jurors were unable to decide whether the 18 shots Gutierrez fired from an SKS rifle at the officers, hitting a patrol truck, was attempted murder or whether it was an effort to die by suicide-by-cop.

Gutierrez was in Coconino County Superior Court charged with two counts of attempted first-degree murder, two counts of aggravated assault and one count of criminal damage.

“We thank the jury for their service in the Gutierrez matter," said Coconino County Attorney Bill Ring. "While the jury could not reach a unanimous decision on attempted first degree murder, the guilty verdicts on two counts of aggravated assault with a deadly weapon upon police officers carries a greater prison penalty."

Ring said the maximum prison sentence on the three guilty counts could be 45 years with a mandatory minimum of 10.5 years in prison. He said the jury made specific findings on two aggravating factors which can enhance the prison time, and the defense has the option of presenting mitigation.

"The judge will weigh the matter and issue the sentence," Ring said. "After sentencing, our office will make a decision regarding a retrial of the remaining charges.”

Barker told jurors during the trial that Gutierrez should be found guilty on all charges; Doughty and Foulks said Gutierrez was guilty of disorderly conduct with a deadly weapon.

Officers with Williams Police Department and Coconino County Sheriff’s Office began searching for Gutierrez throughout the community until his vehicle was located behind an apartment building on First Street in Williams.

Anderson was the first on scene at the apartments and Wilson arrived a short while later to back up Anderson. As Anderson and Wilson stood next to Anderson’s patrol truck, Gutierrez fired 18 rounds from a semi-automatic rifle at the officers. Neither officer was struck. A few minutes later Gutierrez emerged from the building and was arrested without incident by the officers.

Sentencing for Gutierrez is set for 9 a.m. on Feb. 22 in front of Judge Mark Moran at Coconino County Superior Court.