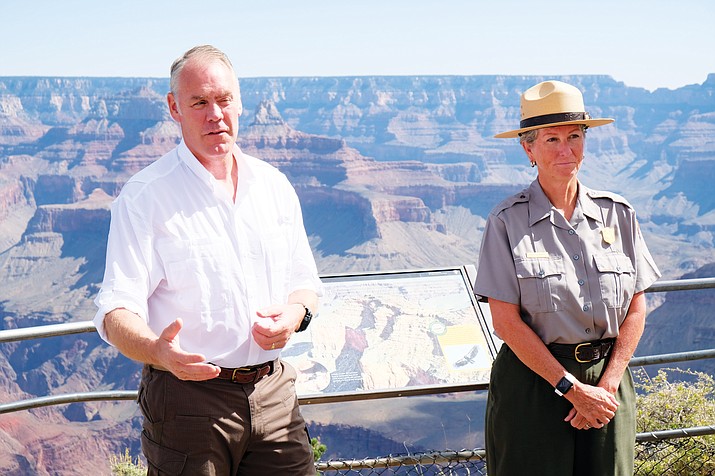 In his resignation letter, obtained by the Associated Press, Zinke said “vicious and politically motivated attacks” against him had “created an unfortunate distraction” in fulfilling the agency’s mission.

Trump, in tweeting Zinke’s departure, said the former Montana congressman “accomplished much during his tenure” and that a replacement would be announced this week. The Cabinet post requires Senate confirmation.

Zinke is leaving weeks before Democrats take control of the House, a shift in power that promises to sharpen the probes into his conduct. His departure comes amid a staff shake-up as Trump heads into his third year in office facing increased legal exposure because of intensifying investigations into his campaign, business, foundation and administration.

Zinke’s resignation letter, obtained from a Zinke aide, cites what he calls “meritless and false claims” and says that “to some, truth no longer matters.”

The letter, dated Dec. 15, said Zinke’s last day would be Jan. 2. It was not clear whether Zinke had already submitted the letter when Trump tweeted.

Zinke, 57, played a leading part in Trump’s efforts to roll back federal environmental regulations and promote domestic energy development. He drew attention from his first day on the job, when he mounted a roan gelding to ride across Washington’s National Mall to the Department of Interior.

Zinke had remained an ardent promoter of both missions, and his own macho image, despite growing talk that he had lost Trump’s favor. On Dec. 18, Zinke appeared on stage at an Environmental Protection Agency ceremony for a rollback on water regulations. Mentioning his background as a Navy SEAL at least twice, he led the audience in a round of applause for the U.S. oil and gas industry.

As interior secretary, Zinke pushed to develop oil, natural gas and coal beneath public lands in line with the administration’s business-friendly aims. But he has been dogged by ethics probes, including one centered on a Montana land deal involving a foundation he created and the chairman of an energy services company, Halliburton, that does business with the Interior Department.

Investigators also are reviewing Zinke’s decision to block two tribes from opening a casino in Connecticut and his redrawing of boundaries to shrink a Utah national monument. Zinke has denied wrongdoing.

Arizona Rep. Raul Grijalva, the top Democrat on the House Natural Resources Committee, had warned that after Democrats took control of the House they intended to call Zinke to testify on his ethics issues.

“It’s safe to say that Citizen Zinke may be leaving, but real oversight of former Secretary Zinke has not even started,” Sarvana said in an email.

Earlier this month, Zinke unleashed a jarring personal attack on Grijalva, tweeting, “It’s hard for him to think straight from the bottom of the bottle.”

Zinke got a warmer send-off from Republican Sen. Lisa Murkowski of Alaska, head of the Energy and Natural Resources Committee, who said in a statement that he had been a “strong partner for Western states.”

Under Zinke’s watch, the Interior Department moved to auction off more oil leases, ended a moratorium on new sales of federally owned coal, and repealed mandates governing drilling. Zinke’s focus on the president’s energy agenda was cheered by oil, gas and mining advocates, who credit the administration with seeking to balance conservation with development on public lands. But his tenure was denounced by most conservation groups.

Bernhardt, the deputy secretary, is in line to lead the Interior Department on an interim basis. He has spent years in Washington as a lobbyist for the oil and gas industry and has deep ties to Republican politicians and conservative interest groups.

Two outgoing Republican congressmen are said to be interested in the job – Rep. Raul Labrador of Idaho and Rep. Jeff Denham, R-Calif.,

As head of Interior, Zinke made plans to realign the agency’s bureaucracy, trimming the equivalent of 4,600 jobs, about 7 percent of its workforce. He also proposed a massive overhaul that would have moved decision-making out of Washington, relocating headquarters staff to Western states at a cost of $17.5 million.

Zinke was a one-term congressman when Trump selected him to join his incoming Cabinet in December 2016.

An early Trump supporter, Zinke is close to the president’s eldest son, Donald Trump Jr., and publicly expressed his interest in a Cabinet post when Trump visited Montana in May 2016.