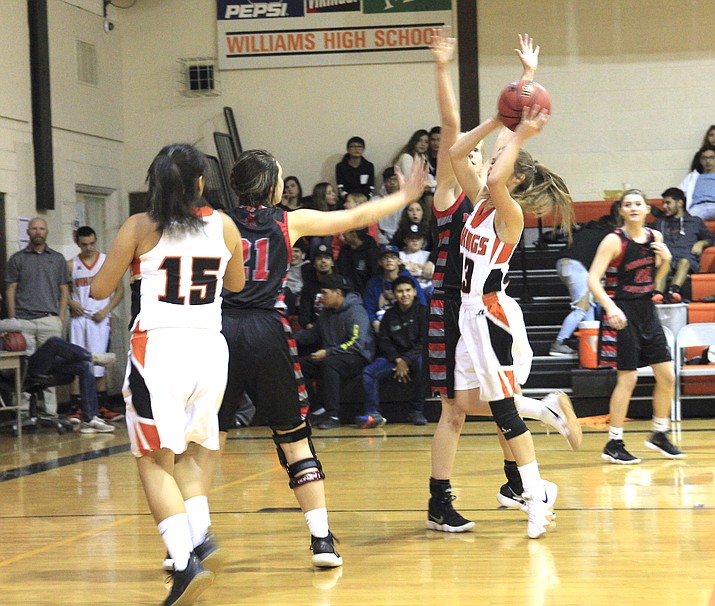 Madi Olsen snags a rebound in the game with the Mogollon Mustangs Dec. 18. (Loretta Yerian/WGCN)

Stephen Gary led the scoring for the Vikings, pulling down 20 points and shooting 90 percent from the floor. 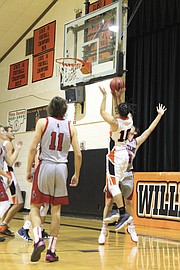 Luis Lara takes a shot in the game with the Mogollon Mustangs Dec. 18. (Loretta Yerian/WGCN)

William Mcmenamin and Zain Grantham followed with 12 and 11 points respectively.

The Yetis stayed close to the Vikings leading 12-10 at the end of the first, with the Vikings slowly pulling ahead in the second quarter outscoring the Yetis 11-6. The Vikings exploded as the returned to the court after half-time and pulled in 22 points to the Yetis’ 11.

The Lady Vikes went 1 for 2 last week as the team faced Ash Fork and Mogollon.

Sydnee Mortensen was Player of the Game at Ash Fork Dec. 14, as she led the team with 19 points with three 3-point shots, going 5 for 14 in field goals.

The Vikings and Spartans remained close throughout the game until the final quarter when the Vikings pulled ahead bringing 19 points to the Spartans five. The Vikings won the game 37-19.

Amaryssa Orozco followed Mortensen with 10 points going 4 for 9 in field goals, with a 44 percent shooting percentage. Orozco also went 2 for 2 in free throws, had six rebounds and three steals.

On Dec. 18, the Vikings played Mogollon at home. The powerful Mustangs controlled most of the game beginning in the first half where they outscored the Vikings 30-17. The came into the second half in the same form outscoring the Vikings 35 to 17. The final score was 65-34.

For the Vikings, Mortensen and Ford led in scoring with 10 points apiece. Ford went 5 for 6 in field goals with an 83 percent shooting percentage. Mortensen made 2 for 6 in 3-point attempts.

Olsen led the team with six rebounds, followed by Mortensen with five.

The Vikings play in the Camp Verde Tournament Dec. 28-29 and return home to face Joseph City Jan. 5. The varsity girls play at 5:30 p.m. followed by the boys at 7 p.m.