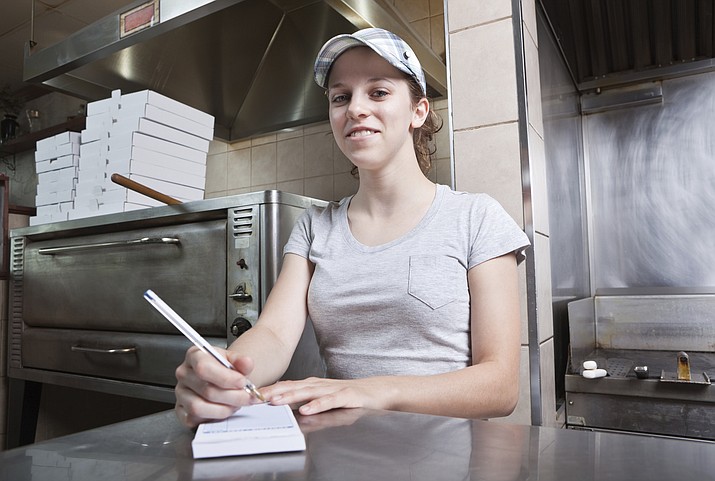 WILLIAMS, Ariz. — Arizona workers at the bottom of the wage scale will get a pay raise on Jan. 1 that, for full-timers, will amount to $1,000 more a year.

For tipped workers who make at least $3 an hour in tips, the wage starting Jan. 1 will be $8 an hour. That’s because the law gives employers a $3 tip credit for wages paid to workers who can get up to the $11 minimum when their earning in tips is factored in.

It’s not just Arizonans at the bottom who are likely to see an effect. The increase in the should also push up wages for those above the minimum wage, economists say.

University of Arizona economist George Hammond said accurate wage data for the past few years is still being compiled.

“But what we’re seeing macroeconomically is that the state’s still growing rapidly,” he said. “Overall wage growth accelerated last year, as you might expect with a minimum wage increase.”

There’s little indication of a slowdown in hiring by those companies most affected by having to shell out more.

Employment in the low-wage sector of leisure and hospitality continued to increase, faster than the private sector as a whole, even as the average hourly wage of all workers in that industry also went up, Hammond noted.

In the past year, total private-sector employment in Arizona went up 3.6 percent, according to the state Office of Economic Opportunity. And employment among restaurants and bars, traditionally at the low end of the wage scale, is up by 5.6 percent.

Hammond said there is some indication that inflation — the cost of buying things — has increased in the Phoenix metro area where it is measured, up from 1.6 percent in 2016 to 2.5 percent last year. He said it’s impossible to say at this point how much is because of higher wages forcing up prices.

But Garrick Taylor, spokesman for the Arizona Chamber of Commerce, said it’s only logical that the higher costs are being passed along. And at some point, he said, the increases can’t be sustained.

“There’s only so much someone will pay for a sandwich or a cup of coffee,” he said.

The chamber was so opposed to the 2016 measure that it not only spent money campaigning against it, but went to court in a bid to block its implementation. Both efforts failed.

Taylor said his organization’s opposition is not strictly financial.

“We believe that mandating wage policies via the ballot box is a poor way to carry out public policy, especially in the area of wages,” he said.

He acknowledged that the increase — the minimum wage as of Jan. 1 will be 37 percent higher than it was in 2016 — has not caused financial ruin.

“This economy is quite healthy right now,” Taylor said. “But that doesn’t mean that there is not somebody who is looking to get into the labor market who has been priced out by higher mandated wages.”

The 2016 initiative was actually the second time voters decided workers should be paid more than Arizona lawmakers wanted.

A 2006 ballot measure created the state’s first minimum wage, setting it at $6.75 an hour when Arizona employers needed only comply with the federal minimum of $5.15. That initiative also set in place a process for automatic increases linked to inflation.

That, however, got the state’s minimum up to just $8.05 an hour in 2016 when advocates got voters to approve on a 3-2 margin the four-step jump to $12 by 2020. That same measure also requires employers to provide at least three days off for sick or personal leave.

Under the terms of the initiative, increases after 2020 will again be linked to inflation.