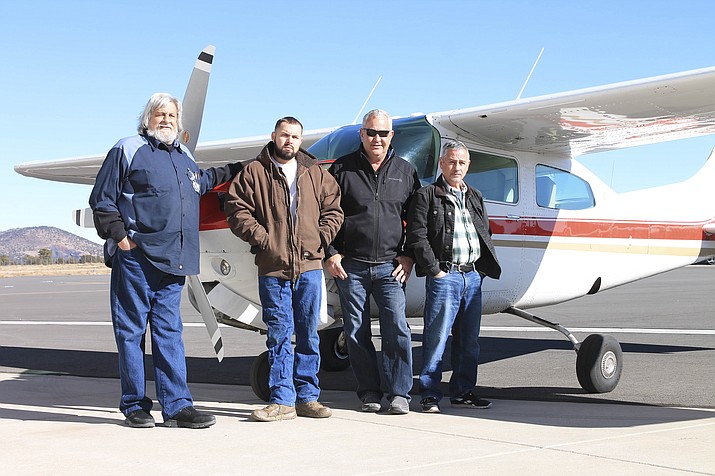 From left: Tom Town and his grandson, Anthony Phillips provide maintenance and inspections for airport customers; Brad Olson is the fixed-base operator (FBO) at H.A. Clark Memorial Field and Jaime Ortiz provides a full-time presence at the terminal. Olson was selected as the FBO in April. (Loretta Yerian/WGCN)

WILLIAMS, Ariz. — Since the city selected a fixed-base operator (FBO) to manage H.A. Clark Memorial Field in April, the airport has seen an increase in traffic, including jet airplanes, and is now offering a courtesy car to customers and has had more long-term rental of the airport’s T-hangers.

Williams city councilman Bernie Hiemenz said this can be attributed to having management and oversight at the airport, including having a full-time presence at the facility.

“It’s great, that’s why it’s really starting to take off and be successful. The city didn’t have anybody available to be out there,” he said.

In April, Brad Olson was selected by the city as the FBO to manage the airport. Olson owns Northern Arizona Aviation and is the owner of Days Inn and Kicks on Route 66 restaurant in Williams. He is also a retired Air Force pilot and a Williams High School graduate. He has a master’s degree in aeronautics from Embry-Riddle Aeronautical University and owns two general aviation airplanes he has kept at H.A. Clark Airport for several years.

In addition to offering more services at the airport, Olson said he has brought in several full-time employees — a flight line operations technician and two aircraft mechanics.

In May, Olson hired Jaimie Ortiz, a Williams’ native, to be on location full-time.

Ortiz has experience in the industry, having worked at both Phoenix Sky Harbor and Mesa Gateway Airport as a flight-line operations technician.

“He seemed to fit the bill for me for what I was looking for — someone to come out here who has experience working around airplanes and refueling airplanes and everything,” Olson said.

Ortiz is responsible for answering phone calls, arranging transportation for customers into town, overseeing the sale of fuel and being that full-time presence at the terminal.

“We’ve been doing this for a long time,” Town said. “I’ve been doing it pretty much my entire life and my dad did it before me and that’s my grandson, he’s following in my footsteps.”

Town retired from the U.S. Navy, where he worked on aircraft and has worked in the private aircraft maintenance industry for most of his life.

“Most of our customers are our friends. They start out as our customers — like Brad and I did,” Town said. “We have a personal relationship with our customers, they’re more than just a number to us.”

The airport is excited to now offer Jet A fuel to customers, in addition to AV gas — leaded, high octane fuel.

“We’ve been kind of working on building up the jet fuel business,” Olson said. “Jet fuel is kind of specific to bigger airplanes and helicopters.”

Olson said October was a good month in sales for jet fuel, which he said were primarily for helicopters, including sales to private contractors like the U.S. Forest Service who are working on controlled burns in northern Arizona.

“We did some of that and we had (Arizona) Fish and Game out here on contract helicopter with the same sort of deal,” he added.

In addition to providing jet fuel at the airport, which brings in additional customers, Olson said the city has agreed to provide a courtesy car for transportation to and from the airport.

He said the airport currently has one vehicle and is working on obtaining a second one for customers.

“People can fly in and they can get some gas and take the car into town,” he said.

In the future, Olson would like to have a full-time car rental booth operating out of the terminal. Currently, customers who want a rental car can call the airport and have arrangements made for them with Enterprise Rent-A-Car. However, the nearest Enterprise location is in Flagstaff.

“We just have to show demand, it’s just like everything else, if they can see that there’s enough demand for rental cars than I think we can justify on expanding on the rental car side of things,” he said.

As the FBO, Olson leases most of the facilities at the airport from the city, except for the T-hangers.

In the past, the hangers have been periodically rented for a day or two by pilots but Olson said they were under-utilized. He saw this as an opportunity and went before the city council in September to ask them to alter the rental rates to encourage long-term rentals.

“The T-hangers are small aircraft hangers and those … since the city built those four years ago, they’ve had a very low utilization rate on those hangers,” he said.

“We are kind of like the leasing agent to help them lease those out and the money goes to the city,” he added.

In October, Olson rented nine out of 10 of the hangers. They currently have two hangers available. Olson also manages all of the tie-down spaces at the airport — setting the rate and collecting the fee.

Olson said he is excited about how the operation has been going so far and believes there is a lot of opportunity for the future of the airport. He is also happy with the relationship he has been able to foster with the city which is key to having a successful facility.

“The city has been very, very good with us, they work very well with us,” Olson said. “I am very happy with the relationship we have with the city.”