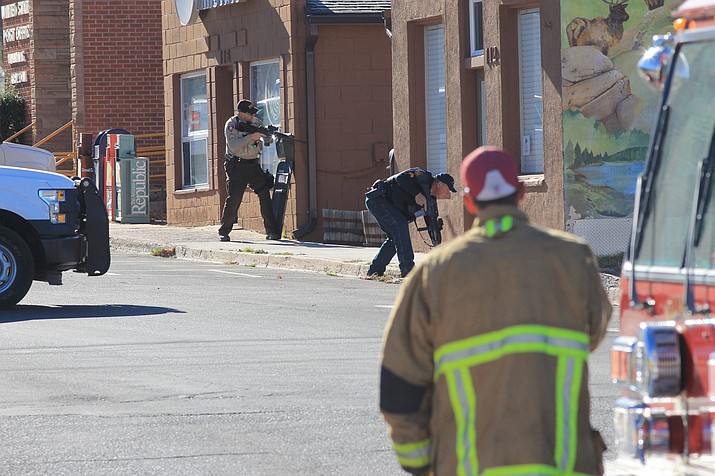 WILLIAMS, Ariz. — The jury went into deliberations Dec. 20 for the trial a man accused of shooting at Williams police officers in November 2017.

Jowell Gutierrez is on trial for the shooting that occurred on Nov. 28, 2017, in the area of First Street in downtown Williams.

Gutierrez is in Coconino County Superior Court charged with two counts of attempted first-degree murder, two counts of aggravated assault and one count of criminal damage.

Throughout the trial, attorneys agreed that Gutierrez pulled the trigger of his SKS sending a barrage of 18 bullets toward officers, hitting a patrol truck the officers were taking cover behind.

However, prosecuting attorney Ammon Barker painted Gutierrez as suicidal and intent on killing police officers. Defense attorneys Staci Foulks and Charles Doughty agreed that Gutierrez was suicidal, but said Gutierrez did not intend to kill police officers — he was seeking suicide-by-cop.

Barker said Gutierrez should be found guilty on all charges; Doughty and Foulks said Gutierrez was guilty of disorderly conduct with a deadly weapon.

Officers with Williams Police Department and Coconino County Sheriff’s Office (CCSO) began searching for Gutierrez throughout the community until his vehicle was located behind an apartment building on First Street in Williams.

As Anderson and Wilson stood next to Anderson’s patrol truck, Gutierrez fired 18 rounds from a semi-automatic rifle at the officers. Neither officer was struck.

Anderson delivered emotional testimony Dec. 19 as he, along with the jurors, watched his body cam footage of the incident and answered questions from the attorneys.

Jurors were shown over an hour of Anderson’s body cam footage from the incident which showed Anderson searching the area for Gutierrez and the eventual discovery of the suspect’s vehicle behind an apartment building on First Street and the subsequent shooting.

The video showed Anderson speaking to dispatchers and other officers as they tried to determine if Gutierrez was in the building, and it progressed to Detective Jerry Wilson arriving on scene.

As the two officers took cover behind the vehicle, they were heard discussing which apartment was Gutierrez’ and whether anyone else could be in the apartment.

About two-thirds of the way through video, the jurors watched as 18 rounds of gunfire were fired toward the officers, hitting the side of Anderson’s truck and windshield.

Wilson was heard yelling and then seen retreating to his vehicle as Anderson crouched near the left rear of the truck.

A few minutes later, Gutierrez emerged from the building and was arrested by Wilson.

The final minutes of the video show Anderson speaking to Coconino County Sheriff’s Office deputies, with one asking him if he was ok.

Despite no visible injuries, Anderson replied, “No man, I’m not alright.”

When the video ended, Barker began questioning Anderson about how he felt at the time of the shooting.

“At first it was unbelievable that this was (happening),” Anderson said. “At one point I believed I was going to die or be seriously injured. And then at one point it came to mind that I wouldn’t see my son.”

When asked if it was difficult to watch, Anderson said, “Yes, listening to the bullets blowing by.”

The jury had not reached a verdict by the time the Williams News went to press.