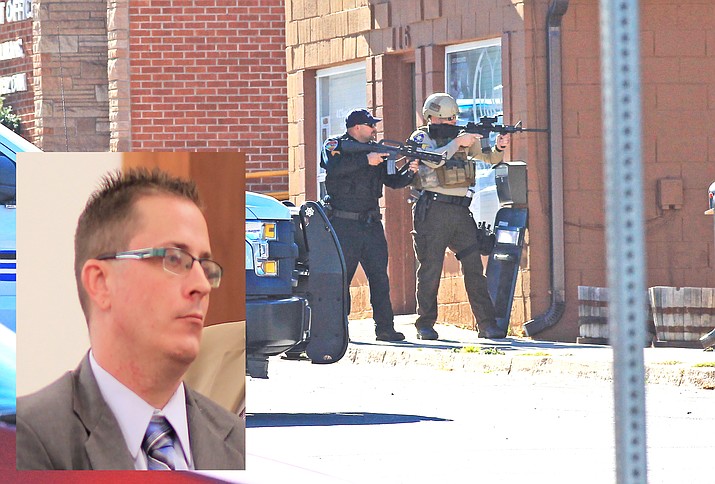 WILLIAMS, Ariz. — The trial began Dec. 13 for a man charged with attempted homicide in a Nov. 28, 2017 shooting in downtown Williams. Jowell Gutierrez is accused of shooting at law enforcement officers who were responding to calls of a suicidal subject.

Gutierrez is on trial in Coconino County Superior Court for two counts of attempted first degree murder, two counts of aggravated assault, and one count of criminal damage.

The morning of the shooting, authorities say Gutierrez was despondent, with suicidal thoughts, armed and had intentions of shooting any law enforcement officers that came near.

Officers with Williams Police Department and Coconino County Sheriff’s Office (CCSO) began searching for Gutierrez throughout the community until his vehicle was located behind an apartment building on First Street in Williams. 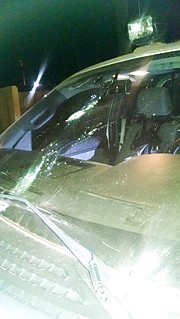 As Anderson and Wilson stood next to Anderson’s patrol truck, Gutierrez fired 18 rounds from an SKS rifle at the officers. Neither officer was struck.

In his opening statement, Barker said Gutierrez intended to shoot the first police officer that he saw and quoted Gutierrez as saying, “F--- Williams PD,” immediately following the shooting. Barker said Gutierrez shot at the officers with the intent to scare them and knowing his conduct could cause their deaths, and is guilty of all the charges against him.

One of Gutierrez’ defense attorneys, Charles Doughty, outlined in his opening statement that Gutierrez was in a spiral of depression that morning, describing him as “more despondent, more detached, more desperate” and “hopeless about his situation.”

Doughty said Gutierrez was upset his family contacted the police and all he wanted to do was die. He said Gutierrez didn’t have the will to pull the trigger, and the next best thing in his mind was to provoke officers into shooting him.

Doughty said evidence shows a small radius where bullets impacted Anderson’s truck, but the bullets did not track Anderson or Wilson as they retreated from the line of fire. He also said Gutierrez’ statements to the officers were “inflammatory.”

“Jowell didn’t provoke the officers who were storming his castle — he needed to antagonize the officers,” Doughty said.

Doughty said Gutierrez did discharge a firearm, but “he did so recklessly, intending to disturb the peace of that area and ultimately to provoke the officers into killing him,” and said at the end of the trial the jury would find Gutierrez guilty of disorderly conduct with a deadly weapon.

Authorities allege the shooting was the result of a drawn-out plan of suicide-by-cop that had been revealed first by Gutierrez’ supervisor, Steve Owens, a branch manager with Legacy Beverage.

Owens, the second witness to appear Dec. 13, said he became aware of Gutierrez’ state of mind when he spoke to him by phone the morning of Nov. 28. He said he had made four attempts to get in touch with Gutierrez when he failed to show up for work that morning.

When Gutierrez eventually answered the phone, Owens said Gutierrez was extremely upset, “ranting and raving,” and was difficult to understand.

A former CCSO deputy, Owens said he spoke to Gutierrez for about four minutes, trying to calm him down. Owens said that at least six times during the conversation Gutierrez threatened to kill any law enforcement officers that came near him.

“He will shoot,” any officers that came near him, Owens said.

Wilson, one of the two officers fired upon at the residence, was the first witness to testify at the trial and gave details of how officers responded and the resulting shooting.

The detective has been a Williams officer for two and a half years, a Maricopa County Sheriff’s Office deputy for 26 years, and a recruit training officer for seven years.

He said he had been in his office at Williams Police Department that morning checking briefings when the call came in regarding Gutierrez.

Wilson said Gutierrez’ mother had called 911 reporting that Gutierrez was suicidal, making suicidal threats and “to the best of her knowledge, he was armed.”

Wilson said officers fanned out searching for Gutierrez while numerous people, including himself, tried to reach Gutierrez by phone.

“I continued, while I was looking, to make phone calls, to get a hold of him so we could locate him and get him some help,” Wilson said.

Wilson said his intent was to get Gutierrez some assistance.

“Suicide is not a crime, I was just trying to help him,” he said.

Because Gutierrez’ vehicle was parked outside the building and he wasn’t answering his phone, the officers considered the possibility that Gutierrez could be barricading himself inside the apartment. Officers did not have reason to believe anyone was with him.

Wilson said all the officers on scene had their weapons deployed, including Anderson, who was armed with a rifle when he arrived on scene. Wilson said he observed the CCSO deputies with a rifle and a shotgun.

Although they were unaware of Gutierrez’ plans, responding officers were in a defensive mode based on the information the dispatcher provided to them, Wilson said.

“At the time of the situation we heard that he was possibly wishing suicide-by-cop — he wanted us to shoot him,” he said.

“Elevation is a great thing to have, but we didn’t have it, he did,” Wilson said.

After moving to the rear of the truck, Wilson said he and Anderson were watching the apartment when shots rang out.

“Immediately we both ducked down and I now realized I had a high powered rifle pointing at me,” Wilson said.

Wilson said he retreated to his vehicle and retrieved his tactical vest, a ballistic helmet and his rifle.

“I recognized that sound distinctly, I knew it was an AK or SKS or a sniper rifle,” Wilson said. “I could tell by the rate of the fire that it was a semi-automatic.”

Wilson said he has seen those type of rounds, which he believed were 7.62 caliber rounds, go through quarter-inch titanium plates like “a hot knife through butter,” and knew he was not safe behind the patrol truck or his ballistic vest.

Wilson said following the shots, he heard someone he believed to be Gutierrez yell “F--- Williams Police” from the window.

As Gutierrez was secured in the back of the patrol truck, Wilson heard him say “I didn’t know it was you and Anderson.”

On Dec. 14 the jury heard testimony from Wygal and Romero. The trial continues this week and is expected to conclude Dec. 21.