Southwestern states get until Jan. 31 to seal drought deal for Colorado River 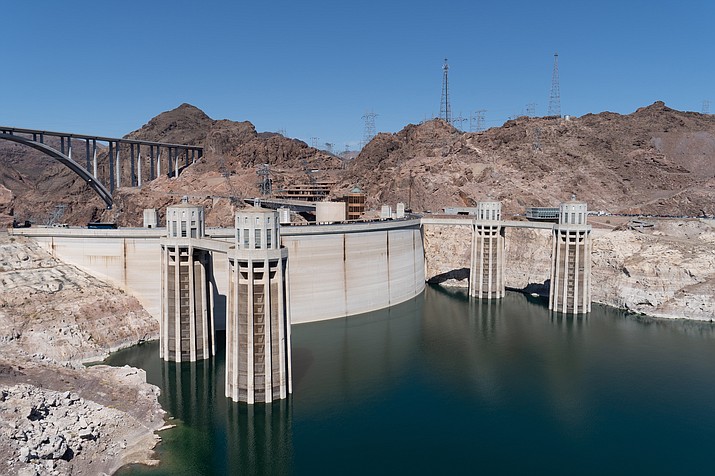 The Hoover Dam outside of Las Vegas on the Nevada/Arizona border and Lake Meade where officials are discussing a plan that would distribute less water to Arizona, Nevada and California in order to give the lake a boost. (Stock photo)

LAS VEGAS (AP) — The head of the federal agency controlling the Colorado River said Dec.13 the U.S. government will impose unprecedented restrictions on water supplies to the seven Southwestern U.S. states that depend on the river unless everyone agrees by Jan. 31 on a plan to deal with an expected shortage in 2020.

Water users from Arizona, California, Colorado, Nevada, New Mexico, Utah and Wyoming should have had a pact to sign at an annual water users’ conference this week in Las Vegas, said Bureau of Reclamation Commissioner Brenda Burman.

They didn’t. However, a flurry of approvals in several states in recent weeks signaled urgency and set a stage for an overall agreement to use less water from a river beset by drought and locked into promises to deliver more water than it takes in.

Burman identified California and Arizona as the holdouts.

“Close isn’t ‘done,’ “ she told a standing-room crowd at the Colorado River Water Users Association conference at a Las Vegas Strip resort. “Only ‘done’ will protect this basin.”

The river that carries winter snowmelt from the Rocky Mountains to the Gulf of Mexico is plumbed with dams to generate hydropower and meter water releases. It provides drinking water to 40 million people and cities including Los Angeles, San Diego, Denver, Phoenix and Las Vegas. It irrigates crops in wide areas once deemed as reclaimed desert in the U.S. and Mexico.

The keys to contingency plans are voluntary agreements to use less water than users are allocated from the river’s two largest reservoirs, Lake Powell behind the Glen Canyon Dam on the Arizona-Utah state line and Lake Mead behind Hoover Dam just east of Las Vegas.

To date, entities including agricultural districts and municipal suppliers in five states have reached what Burman characterized as a complex puzzle of agreements.

Indian tribes also are involved, and Burman on Dec. 13 announced publication of a report called the Colorado River Basin Ten Tribes Partnership Tribal Water Study . It charts water claims and use by tribes that hold rights to divert almost 20 percent of the water in the river.

A drought-shortage declaration next year would cut 11.4 percent of Arizona’s usual river water allocation beginning in 2020, and 4.3 percent of Nevada’s share. That amount of water, combined, would serve more than 625,000 homes. California would voluntarily reduce its Colorado River use by about 6 percent.

Arizona gained approvals for conservation, mitigation and payment plans from its Department of Water Resources and the key Central Arizona Project irrigation district. Unlike the other states, it also needs state Legislature approval for water agreements. Lawmakers convene in January.

In California, the largest municipal suppliers have signed on, including the Metropolitan Water District of Southern California serving some 19 million people.

However, the sprawling Imperial Irrigation District, which holds some of the largest and oldest rights to river water, has so far granted only tentative approval. James Hanks, board president, said in an interview the district wants to be last to sign so it can see what others agree to.

It also wants government help to save the Salton Sea, a briny shallow desert lake east of Palm Springs, California, that is fed primarily by agricultural irrigation runoff. Dusty hot winds blowing across exposed former shorelines are blamed for asthma by area residents who also complain of sometimes brackish smells.

Burman didn’t say what the federal government plans if it is left to impose restrictions.

But local officials warned that a free-for-all could lead to crippling lawsuits and legislative gridlock.

“Everyone thinks their own water use is justified and no one else’s is,” observed Kathryn Sorensen, Phoenix city water services director.

Keith Moses, vice chairman of the Colorado River Indian Tribal Council in Arizona, offered what he saw as a key to complex water questions.

“To me, the best way of conserving water is not to use it,” he said before adding that he knew that would mean limiting growth so as not to continue to drain the Colorado River.

“Realistically,” he added, “looking at it, that’s not going to happen.”