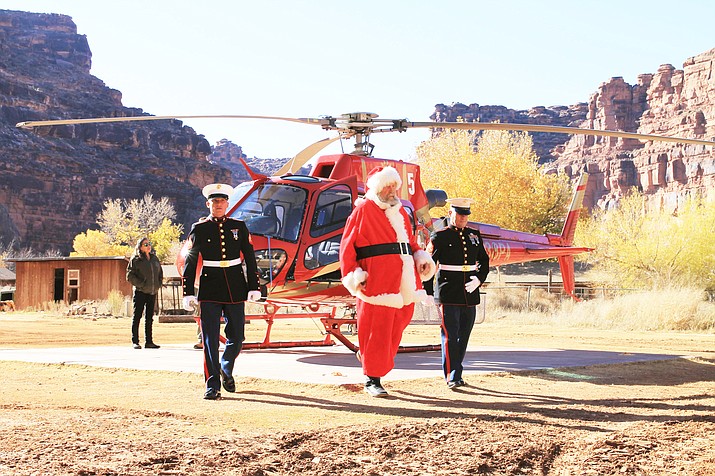 SUPAI VILLAGE, Ariz. — Anya Uqualla, a young Supai mother holds her 2-month-old infant in her arms as she sits on a bench in the village square watching three U.S. Marines and several volunteers make final arrangements for Santa Claus, who will be arriving by helicopter later that morning.

Children in Head Start in Supai Village, located deep within the Grand Canyon, dig into gift bags given to them by the Toys for Tots program Dec. 12. (Loretta Yerian/WGCN)

In addition to the infant, Uqualla has four school age children who will be escorted from their classrooms once Santa arrives. Santa’s visit is the biggest event in the village during the Christmas season and it’s the only time the children are able to sit on Santa’s lap and receive gifts directly from him. Even more than receiving gifts, being able to visit with Santa is the highlight of the day, Uqualla said.

“Seeing Santa — he is the only (Santa) during the holidays,” she said. “They are excited about the toys, the Marines and the chopper. We look forward to this every year.”

For her, the best part is watching her children.

“Seeing my kids excited about the day — seeing the chopper,” she said.

The Havasupai Reservation is one of the most remote reservations in the United States. Nestled deep within the Grand Canyon, the only way to access the village is by horseback, helicopter or an 8-mile hike. This section of the Grand Canyon lies outside the boundary and jurisdiction of Grand Canyon National Park and can be reached by car via Indian Road 18 — a 66-mile drive located off Historic Route 66 near Peach Springs, Arizona.

The reservation is perhaps best known for its turquoise waterfalls — Havasu, Mooney and Beaver Falls. The Havasupai Tribe are called the ‘people of the blue-green water’ and many national and international tourists trek through Supai Village on their way to the luxurious waterfalls on the far side.

The village is small — boasting a café, lodge, school, post office and general store. There is no McDonalds, Wal-Mart or 7-Eleven and access to other modern luxuries is non-existent. But those who live on the Havasupai Reservation are not accustomed to having convenience at their fingertips. When they need something one of the easiest ways to get it is to have it flown in by helicopter.

U.S. Marine Corps Major James Hedger prepares to secure a pallet of food and water to be flown into the Havasupai Reservation. (Loretta Yerian/WGCN)

While convenience may not be a way of life in Supai, there is one annual tradition tribal members look forward to more than most. Every year the U.S. Marine Corps hand delivers toys to the children of Supai through its Toys for Tots program. The event is made possible through fundraising by the Marine League Charities and with support by Papillon Helicopter Tours and St. Mary’s Food Bank.

U.S. Marine Captain Hal Jensen started Operation Supai in 1996 and in 1998, Lieutenant Colonel James McGee and his wife Tina McGee took over coordination of the event.

“Hal was interested in the needy children that were less privileged,” Tina McGee has said about the event. “He was very aware, being in northern Arizona, of all the Native American communities. He felt that he not only wanted to help local children, but he wanted the outreach to be to isolated tribes and villages that needed Christmas as well.”

Coordination for the event begins in October when a list of Havasupai children is collected by the Marine League Charities from the Havasupai School. U.S. Marines from the Environmental Services Division, a reserve unit out of Phoenix are contacted to provide volunteers for the operation and St. Mary’s Food Bank begins organizing a meal to share with the community after the event. Papillon Helicopters provides transportation — slinging in food in a net below the helicopter along with flying in volunteers and U.S. Marines the day before the Santa visit and then flying in Santa Claus and two additional Marines the day of Santa’s visit.

Everyone’s goal is the same — to see children smile as they receive Christmas gifts and a visit from Santa. Making sure no child is overlooked is important to everyone.

“Our final list is (finalized) almost the last week before we fly in,” said Emerson Cleveland, a board member with the Marine League Charities. “We double check and double check.”

This year, 143 children were listed, in addition to children who were visiting from Peach Springs. Coordinators also brought extra presents for children who may not have put their name on the list in time.

While the fly-in targets children, it is a community event with almost the entire village showing up to take part and watch.

“This is a really big event. They enjoy Santa coming in because a lot of parents are very remote here. They don’t do a lot of shopping that a lot of other families are used to, so it’s a special event for Santa to come down with gifts,” said Lolita Paddock, principal at the Havasupai School.

Major James Hedger with the Phoenix Environmental Detachment at Luke Air Force Base was one of the Marines to fly-in to the village this year. To him, it was a special experience.

“This is the true (idea) of what Toys for Tots is about. It’s about not pounding your chest, not taking credit for it but just going out and giving back to some kids and seeing some happy faces — giving some hugs and having a great day,” Hedger said.

Hedger, who is 18 years into his career in the USMC, served in Okinawa, and was deployed to Iraq, and he served 10 years active duty before going into a reserve unit. Hedger said for him, and many other Marines getting to be a part of the Toys for Tots program at Supai Village, is a unique opportunity that his unit has been a part of since the conception. He hopes it stays that way.

“We don’t get that many opportunities. This type of opportunity is few and far between but it brings back all those things that you love about the Marine Corps — small units doing great things,” Hedger added.