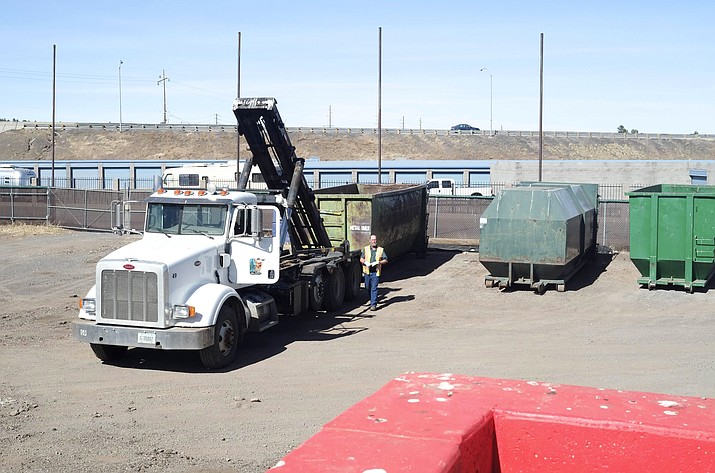 Williams Transfer Station customers can expect changes to recycling because of new management at the Waste Management facility in Flagstaff, which is one of two places the transfer station delivers recycle.

WILLIAMS, Ariz. — Following a ban on certain plastics by China earlier this year, there has been uncertainty on if or how recycle in Williams will be affected.

However, Jeff Pettit, foreman for the Williams Transfer Station at the city of Williams, said changes will not happen any time soon.

According to Pettit, the most recent change is new management at the Waste Management facility in Flagstaff, which is one of two places the Williams Transfer Station delivers recycle.

“Waste Management is getting ready to get a new plant operator and it’s going to change then,” Pettit said.

Pettit is not certain when this change will take place and said it is still unclear as to what kind of changes will be implemented.

“We are trying to take as much recycle to Norton as we can right now,” Pettit said.

Until changes do occur, Pettit said residents should continue to recycle as usual.

“Nothing has changed (in Williams) right now," Pettit said.

Is recycle mixed with the trash?

Additionally, Pettit addressed recent concerns that recycle is being mixed with trash during pick-up.

He said trash and recycle is not combined and said concerns about recycling not separated from trash could be because of the similarities of recent vehicles purchased by the Transfer Station.

“A lot of times we’re having issues (because) our trucks are all the same color now,” he said. “If I send one truck out and you, for example, ask for an extra trash pick-up on a recycle day, that same color truck will go to your house and pick up the trash that you called in on. There’s a lot of confusion there — the trucks look like identical twins now.”

Pettit added that recycle is separated once it reaches Waste Management or Norton before it is transported to a facility in Phoenix.

What can I recycle?

“The only thing we can’t figure out is phone books. Phone books need to go in the regular garbage now,” Pettit said.

Williams Transfer Station will be closed on Christmas Day and New Years’ Day. Trash for the south side of Williams will be picked up Dec. 26 and Jan. 2.

Trash pick-up for the north side of Williams will remain as scheduled for Dec. 25 and Jan. 1. More information is available from Williams Transfer Station at (928) 635-9108.