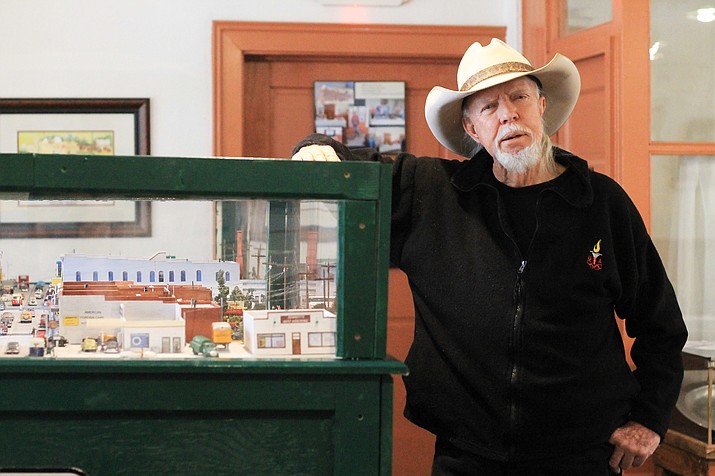 Jim Garvey stands next to his replica of historic Route 66 in Williams. Garvey spent the past three years working on the project that now resides in the history room at the Williams Visitor Center. (Wendy Howell/WGCN)

WILLIAMS, Ariz. — For the past three years, visitors to Bearizona have been treated to Jim Garvey’s miniature version of the Grand Canyon Railway, including a model train and several buildings and lodges on the South Rim.

A student from Heritage Elementary School peers into the miniature diorama at the Williams Visitor Center. (Loretta Yerian/WGCN)

Once it was complete, Garvey began his next project — a replica of historic Route 66 through downtown Williams.

“I did a lot of research and looked at old newspaper photographs and other archives,” Garvey said. It took me about a year to analyze each building and see if I could squeeze it to scale.”

Garvey’s finished product is now on display at the Williams Visitor Center in downtown Williams.

As a cowboy singer on the Grand Canyon Railway for 17 years, Garvey has entertained thousands of visitors with his vocal skills and is a well-known figure in Williams. A 22-year resident of Williams, Garvey began working on the project in 2015.

Born and raised in California, Garvey was classically trained as a vocalist and traveled the world as a young student. After high school, he joined the military as an Air Force fighter pilot, doing three tours in Vietnam, before becoming a law enforcement officer with the Los Angeles County Sheriff’s Office.

“It’s just been a steady progression of things I’ve wanted to do in life,” he said about the varied experiences.

Unknown to many is that Garvey is also a talented artist. During his time entertaining visitors on the Railway, he also took interest in the historic buildings of the area. He researched the history of the railway and the communities that lie in its path and slowly recreated them in miniature.

“The idea has been around for a while, but I didn’t start it til after the Grand Canyon was done,” Garvey said about the Route 66 project.

Garvey said the final project is not an exact replica of downtown Williams at a precise historic time.

“I tried to highlight some of the local families such as the McNellys and Sandovals,” Garvey said. “But I also tried to recreate it as close as I could.”

Garvey used the historic photos to isolate individual businesses, but found many businesses did not have obvious identifications.

“I couldn’t just have empty buildings,” he said. “So there are some buildings I fudged around with a little. So I either used present day vendors or someone that I knew so I could fill in the front windows of the building.”

Garvey said another challenge was including historic businesses that weren’t in the three-block model.

“Some will notice Sandoval’s station is on the wrong corner, but if I put it where it should be it wouldn’t be in the model,” he said.

Garvey’s buildings are created from blueprints that he designed. He took the actual measurements from the original buildings and collected as many details as he could find.

He constructed the model on his ranch north of Williams before transporting it to the visitor center.

“I designed and built it on my ranch out there, then I had to take it apart, put it on a trailer and put it back together,” he said. “It’s challenging to do it twice.”

Garvey aimed to replicate downtown Williams in the 1940s and 1950s, but some of the buildings in the model have facades from an earlier or later time period.

“Some of the buildings, like the Cabinet Bar, is from about 1901,” Garvey said. “But I like the look of that better than the later photos. I was able to replicate all the signs with the right size and color.”

Many of the replica buildings have detailed interiors that can be viewed. There are also fine details of people and cars on the model streets.

“See the kids in their soapboxes on the side streets doing races? There’s also a mailman, mail wagon and mail boxes,” he said pointing to the model.

Garvey said his motivation for the project came from wanting to leave something visual so people will remember historic Williams.

“It started out for the local families, but it’s also for the tourists,” he said. “There are few books published, but nothing to secure the history visually. If something burns down people could lose it forever. I thought I could capture it in miniature for people to remember.”

Anyone interested in viewing Garvey’s miniature Route 66 can see it at the Williams Visitor Center historic archives room at 200 West Railroad Ave. in Williams.