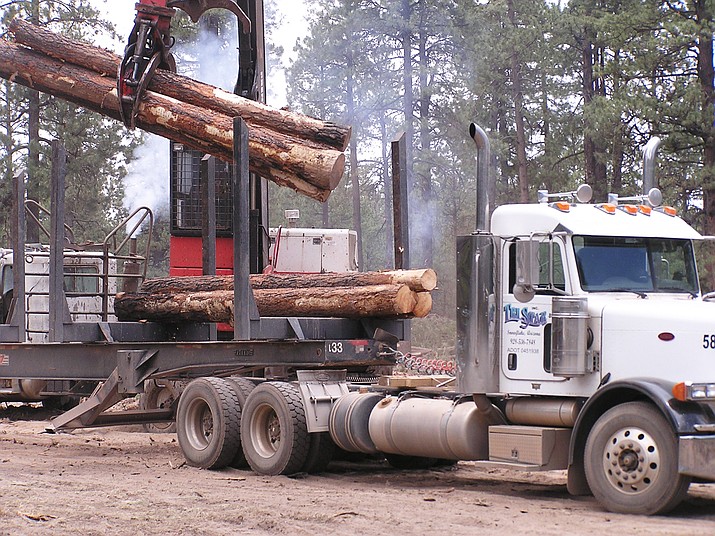 PINETOP, Ariz. — “I try to be a straight shooter.”

That’s what Apache-Sitgreaves National Forests Supervisor Steve Best told those in attendance at the Nov. 28 meeting of the 4FRI Stakeholder’s Group, held in Pinetop.

Best was responding to recent criticism of the logging of trees that were 200 to 300 years old in Apache County near Alpine.

According to a recent article in the Arizona Daily Sun, over 1,300 large old trees were cut as part of the project, reportedly to prevent the spread of a parasite, dwarf mistletoe.

The project carries the ironic name of the Little Timber Sale. It’s part of the West Escudilla Project. The thinning project is organized under the umbrella of 4FRI — the long-term, wide-scale effort initiated by the Forest Service to thin forests on the Tonto, Coconino, Kaibab and Apache-Sitgreaves national forests.

The 4FRI Stakeholders Group includes a mix of local government officials, Forest Service personnel, local timber industry representatives and members of environmental groups such as the Center for Biological Diversity and The Nature Conservancy. The group sent an undated letter recently to Best, protesting the cut of so many large trees. The letter was signed by Jason Whiting, Navajo County Supervisor for District III.

According to letter, “pre-harvest stand exam data obtained by Center for Biological Diversity indicated that only a tiny fraction of large/old trees had levels of mistletoe infection that would warrant removal under the thinning prescription for these stands.”

The letter also stated that large-scale harvest of the big timber was not within the intent of the enabling legislation, the 2009 Collaborative Forest Landscape Restoration Act, which the letter says “fully maintains, or contributes toward the restoration of, the structure and composition of old growth stands.”

In an emotional 20-minute presentation before the stakeholder’s group, Best acknowledged that there have been problems and mistakes.

Best did not get into specifics concerning the trees — how many were cut, or how that happened. He said the cutting of the trees, while it was perfectly legal, was beyond his own expectations.

“My expectations was that it would be very rare that we’d cut any large, old trees,” he told the group. He said that his agency is taking steps to ensure the problem isn’t repeated.

“We’re reevaluating, we’re looking at how we made those decisions and when we should actually cut any big trees,” he said. “My direction to the crews and the ranger is that we’re really going to look at this hard, and make a concerted decision about when we might have to cut a big tree … we’re trying to refine the process of implementation, so we can not do that again, or at least do a better job,” he explained.

Best said that additional cutting of large, old trees was averted near an eagle’s nest, because of the diligence of the loggers, Timber Tramp Logging.

“I wanted to give kudos to those loggers, loggers don’t always get that,” Best said.

The response from members of the stakeholder’s group was overwhelmingly positive. When Best concluded, the room erupted in applause. Pascal Berlioux, director of the Eastern Arizona Counties Organization, and a member of the 4FRI group from it’s inception, praised Best for his candor.

“In working with you guys for almost 15 years now, I’ve never heard the Forest Service talk like you just did. And it is extremely refreshing to me. I can tell you from a personal basis, from an institutional basis, we’re behind you. We’re going to work with you. We all make mistakes … it’s not the end of the world. But what’s important is how we move forward,” Berlioux said.

Tom Torres, Deputy Forest Supervisor for Region 3 on the Tonto National Forest, said that the supervisors for all of the 4FRI forest had met to discuss the problem, saying they were “keenly aware” of the potential for the problem to occur.

“Maybe this happened this time on the A bar S, but it has the potential to happen in other places,” he said.

Best said that people in the local community, however, are mostly pleased with the work of the project. But he said the cutting of the large trees does not signal a return to previous Forest Service practices.