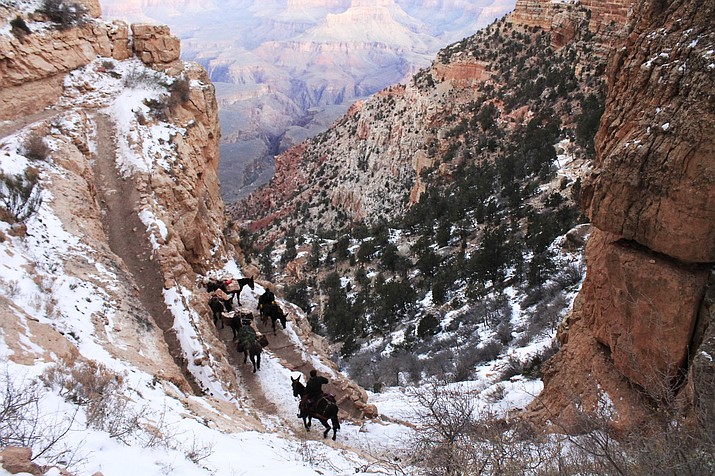 GRAND CANYON, Ariz. — Employees at Phantom Ranch are in the holiday spirit after a Christmas tree was packed into the Canyon by Festus the mule Dec. 4.

After it made the seven and a half mile trip down the trail it was carefully positioned next to the fireplace in the employee bunkhouse and decked out with all of the holiday best.

“I don’t know anywhere else in the nation where they pack in a Christmas tree,” said John Berry, Livery Manager for Grand Canyon National Park Lodges. “I think we’re probably one of the last places that pack Christmas trees and it’s in the Grand Canyon - that's pretty cool."

Berry said he believed that the tree has been packed into Phantom Ranch since it opened in the 1920s.

"Think of those hikers hiking out of South Kaibab (Trail) right now and here comes a pack mule with a Christmas tree on it —it doesn’t get much more Hallmark than that," he said.

Once the tree reaches the ranch it is taken into the employee bunkhouse, to be enjoyed by the employees.

“That makes it feel more like Christmas,” Berry said.

The tree, a 6-7 foot Fir, is from Wisconsin. It doesn’t weigh a lot because of the weight requirements for the mules but the real trick is making sure it isn’t too long.

“It’s not so much the weight, it’s the length," Berry explained. "It gets hard to pack anything much longer than seven feet."

Not only that, but the mule following behind the tree has been known to take bites out of the tree — making it a 6-foot tree by the time it arrives at the ranch.

Berry said Festus, a 10-year-old mule with a short stature, is the perfect candidate for the job.

Festus is only used as a pack mule, primarily because he didn’t work out as a riding mule.

“We tried to ride him here but he’s just little — he didn’t work out as a riding mule,” he said.

Festus came from Tennessee, where all of the Grand Canyon mules are purchased.

“He’s a good mule, a good packer and sure footed,” Berry said.

The trip to Phantom Ranch takes about two and a half to three hours. This year the first mile or more of the trail was covered in a thin layer of snow and ice.

Festus' packers, Jason Casanova and Tiegan Darr started early — packing their string of mules before 6 a.m. and heading down the trail by 7 a.m.

"Festus is a good little mule — small, and that's why we're going to use him for the Christmas tree," Casanova said. "The Christmas tree is about 35 pounds, so it's going to be a light load — light enough."

In addition to the tree, Festus was packed with other items for the ranch, which help keep the tree in place during the trip.

"That's not going to be a hard workout for Festus, he's small yes, but big package," Casanova said.

According to Xanterra policy, the mules are rested between trips in and out of the Canyon.

"Little Festus hasn't been working for about four days now," Casanova said. "That will afford him lots of energy to go up and down the Canyon comfortably. He also had his snack this morning - so he's happy, he's ready, he's festive — he's Festus, festive Festus."

According to Casanova, this is the last year that a live tree will be packed into the Canyon. Any future trees could be artificial.

Earlier this year, packers transported pumpkins into the Canyon and turkeys for Thanksgiving. In addition to the three employees are treated to a Christmas dinner at the ranch.

The rustic cabins and main lodge at Phantom Ranch are built of wood and native stone and fit in with the natural beauty and solitude of the setting. (Photo/NPS, Mike Quinn)

Phantom Ranch is the only lodging facility located below the rim of the Canyon. It is nestled along the mouth of Bright Angel Creek on the north side of the Colorado River.

Built in 1922, it was designed by famed architect Mary Jane Colter.

The ranch is open year round and can only be reached by mule, foot or by rafting the Colorado River.

It is a popular stop-over point for hikers and mule riders.

According to the National Park Service, Mary Colter’s plans for Phantom Ranch, like of all of her designs, drew inspiration from the region’s history, cultural traditions and landscape. Instead of trying to compete with the dramatic scenery, she used native materials to blend in with it.

The cabins and main lodge are built of wood and native stone.

Overnight accommodations at Phantom Ranch consist of four dormitories and cabins. Cabins and dormitories are heated in winter and cooled during the summer months, according to Grand Canyon National Park Lodges.

Dormitories are available only to hikers and are separated into two male dorms and two female dorms. Cabins vary in size and accommodate between two and 10 guests. Because space is extremely limited, all Phantom Ranch reservations must be made in advance. More information is available at www.grandcanyonlodges.com/lodging/phantom-ranch.

In addition to Phantom Ranch, year-round camping is available by permit from the National Park Service’s backcountry office.