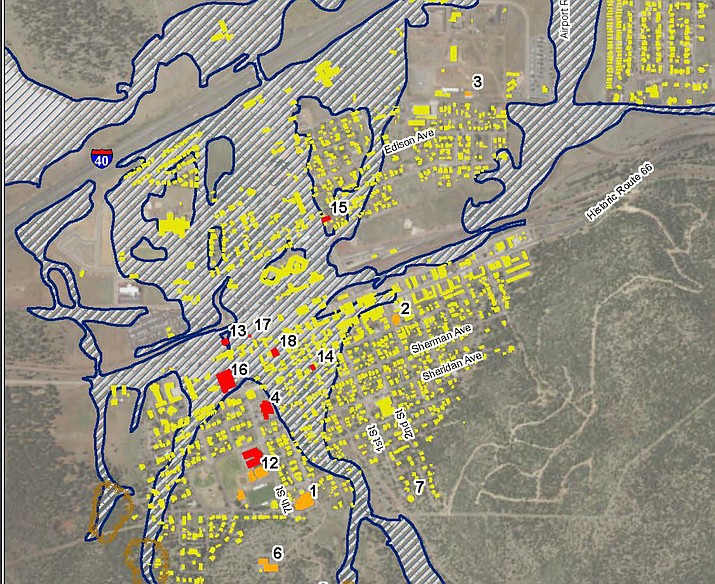 This map represents possible areas that could be impacted by flood waters following a catastrophic fire on Bill Williams Mountain. The blue areas are the areas expected to be inundated, the yellow are current buildings in Williams. The red represents critical facilities such as schools, government offices and utilities that could be affected. (JE Fuller graphic)

WILLIAMS, Ariz. — Coconino County is seeking input on a draft of the new Williams Pre-Disaster Plan.

At the request of Coconino County, JE Fuller Hydrology & Geomorphology has worked on the plan with the city of Williams, Coconino County, Kaibab National Forest and other public agencies and private business stakeholders to understand the potential flood risk and identify ways to limit damage from post-fire flooding.

Each section of the plan describes the potential post-wildfire flood risk and offers mitigation strategies to increase resiliency prior to a fire occurring. An emergency action plan was also developed as part of the project.

The plan recommends channel conveyance mitigation which include reconstructing Cataract Creek at several locations around Williams, such as south of Route 66 and from Franklin Avenue to I-40. It also suggests creating levee like structures along Cataract Creek in downtown Williams, improving the culvert at Cemetery Wash crossing Cataract lake Road, and reconstructing Country Club Drive and the Cataract Lake Road intersection.

For water supply mitigation, the engineers suggest elevating all critical mechanical and electrical components in the Cataract Booster Station above the 100-year post-fire flood elevation, and conducting an assessment of each location where raw water or supply water pipe lines cross draining corridors.

Erosion protection is suggested for Perkinsville Road upstream of Santa Fe Dam, conducting an assessment of utilities that cross drainage corridors and performing a dam safety assessment of Santa Fe and City Dams.

The engineers also suggest developing a reservoir management plan to assess City Dam, Santa Fe Dam and Cataract Dam for potential safety issues because of sedimentation and rapid watering or dewatering of the dams.

In 2017, JE Fuller, in cooperation with the Arizona Geologic Survey, completed an assessment of the potential flooding and debris-flow risk across Coconino County in the event of a wildfire.

The study found that a wildfire on Bill Williams Mountain could increase flood peaks four to eight times the existing 100-year flood levels, with up to a 350 percent increase in the number of buildings in flood-prone areas.

Coconino County has organized several community meetings to address the need for a pre-disaster plan for Williams.

In January of this year, the county hosted its first pre-disaster plan stakeholder meeting in Williams and followed up with another meeting in June.

The Northern Arizona University Alliance Bank Economic Policy Institute (EPI) also conducted a study of the economic impact of post-fire flooding in Williams. The study estimates that the economic impact from a catastrophic wildfire and post-wildfire flooding of the Bill Williams Mountain watershed is between $379 million and $694 million. The cost of current and projected forest restoration on Bill Williams is $8 million.

Anyone interested in commenting on the draft Williams Pre-Disaster Plan can review the plan at https://jefuller.sharefile.com/d-s0e20dc9dc8f4b6bb. The comment period is open until Dec. 31.

Additional comments can be addressed by Lucinda Andreani, Deputy County Manager at (928) 606-5087.