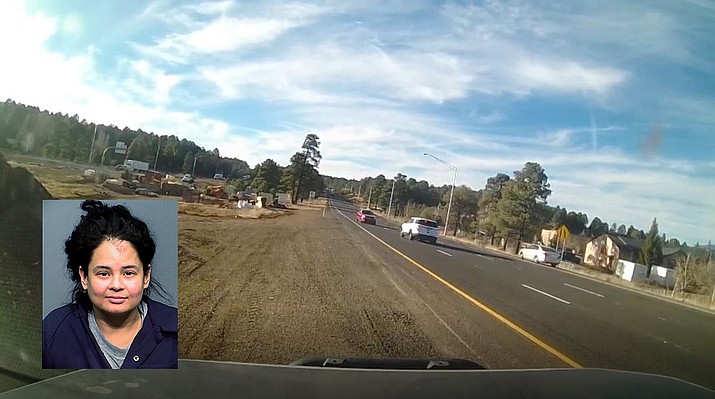 Patricia Carvalho has been indicted on 17 charges in the wrong-way driver crash involving a DPS sergeant on I-40 Nov. 17. (Associated Press photo)

FLAGSTAFF, Ariz. (AP) — Attorneys for a wrong-way driver say an Arizona Department of Public Safety sergeant who used his vehicle as a traffic break is to blame for a crash on Interstate 40 that sent both of them to the hospital.

The driver, 32-year-old Patricia Carvalho, has been indicted on 17 charges, including attempted homicide, aggravated DUI and endangerment. The Los Ranchos, New Mexico, woman had a suspended driver’s license and a blood-alcohol content of more than four times Arizona’s legal limit for driving when she was spotted going the wrong way in Flagstaff, according to court documents.

Sgt. Paul Damgaard used his unmarked, white patrol vehicle as a traffic break. Its emergency lights were flashing as he swerved side to side to slow down traffic before coming to a stop in the middle of three lanes on Nov. 17. In a dash camera video captured by another motorist, Carvalho’s vehicle turns in from an outside lane, hitting Damgaard’s vehicle.

DPS said Damgaard likely saved the lives of other drivers. At least three people called to report that Carvalho was driving recklessly or the wrong way, according to a statement of probable cause.

In an email to The Associated Press, Carvalho’s court-appointed attorneys, Steven Harvey and Kara Sagi, contend that Damgaard injured their client and endangered her child. They also contend the state could be using the media to prejudice the jury pool.

DPS planned to make Damgaard available Friday to talk to reporters but canceled without explanation.

State Trooper Rich Moses tried to pull over Carvalho’s vehicle before the crash, but she fled, made a U-turn and drove the wrong way on I-40. He followed with his lights and siren on, but she didn’t stop until slower traffic around her blocked her path, court documents state.

Moses then got out of his vehicle to arrest her, reaching through the driver side window and grabbing her arm, authorities said. But Carvalho navigated around vehicles as traffic began moving and took off with Moses running briefly beside her vehicle, court documents state.

The crash happened less than a mile down the road. The video shows Carvalho’s and Damgaard’s vehicles hit, throwing debris and liquid about the tree-lined interstate.

Damgaard opens his door but doesn’t immediately get out. Someone else checks on Carvalho and her two-year-old daughter. The child was in the back seat and not injured.

DPS had released a portion of the dash camera video recorded by Flagstaff resident Steve Knapp. The AP obtained the full video from Knapp which shows him pulling up closer to the vehicles.

Knapp said he envisioned three scenarios and wanted to be in a position to react in case the driver stepped out with a gun. That didn’t happen. He got out of his truck to see if the sergeant in the crash needed help but authorities were nearby.

“I’ve seen a lot of blood on the road, so this was nothing,” Knapp said. “But to have it happen right in front of my face, you have to be inhuman not to have any sort of feelings toward this thing.”

At the Flagstaff hospital where she was being treated, Carvalho told authorities she had seven drinks and two shots, but the smell of alcohol was from the night before, court documents state. Authorities found open cans of beer in the vehicle and an open bottle of vodka. Carvalho said she also took three prescription drugs as part of a morning routine, the documents say.

Her blood-alcohol content was .365, authorities said. She was arrested Nov. 19 after being released from the hospital.