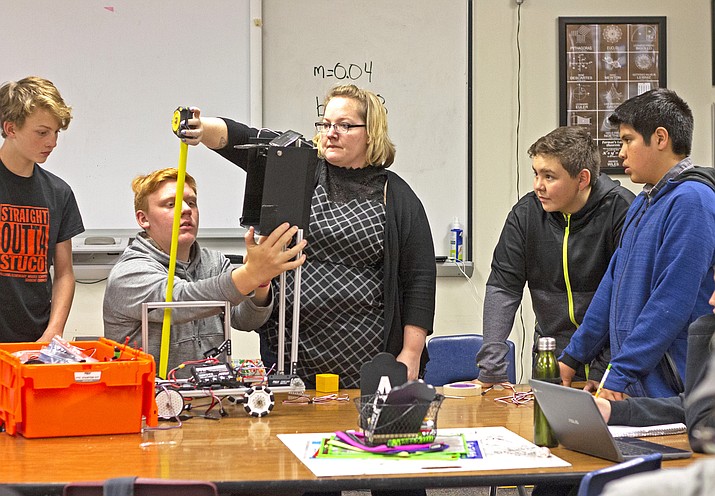 Donya Hadder leads her First Tech Challenge students as they work on their robot in the after-school robotics program.

WEMS students work together on their project for the First Lego League.

Its 3:45 p.m. and the halls at Williams Elementary-Middle School are empty. The buses have departed with many students eager to head home. But down the middle school hall, near the back of the school, there is a buzz of activity.

About 40 students are spread between two classrooms — hunkered over computers, scribbling in notebooks and tinkering with Legos.

These students are part of new program at the school, the First Lego League, that teaches students the basics of robotics under the eye of coordinator and middle school math teacher Donya Hadder.

“They take is pretty seriously, but there is a little bit of hanging out,” Hadder said. “But ideally my hope is to really build this desire.” 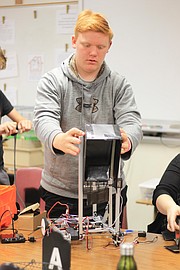 Students work on their project for the First Lego League.

Students watch their robot perform tasks during the after-school robotics program at WEMS.

By building a robot using Lego Mindstorm technology, the kids learn to apply science, technology, engineering and math concepts (STEM), plus work together and use their imaginations to solve problems.

Students work on programming their robot.

First Lego League teams are found globally and are tasked with researching a real-world problem such as food safety, recycling, and energy, and are challenged to develop a solution. They also must design, build and program a robot using Lego Mindstorm’s technology, then compete on a table-top playing field.

It was Hadder’s idea to bring the program to the school, but she knew the program would be costly. She began applying for grants and reaching out to the community.

This fall, Hadder was awarded a Voya Unsung Hero Grant and a FIRST Robotics Competition Rookie Grant that helped her get the program off the ground. In addition to the grant, local businesses such as Old Trails True Value, Car Quest, LP's Excavating and Grand Canyon Railway jumped on board with more financial assistance.

Engineers from the community, including several from Grand Canyon Railway, have also been helping instruct the students.

Hadder is also using the program to unite students from the two local schools, WEMS and Heritage Charter School.

"Most of these students end up at the same high school," Hadder said. "I used to work at Heritage and I saw the transition was really bumpy. I wanted to find a way to have communal things. To me its great - we have Heritage kids right here with our WEMS kids."

“I’d really like to build the program and have (the students) go up to the high school and join Battle Bots,” Hadder said. “They have a beautiful shop up there, but for now this is where we are at…building our bots out of duct tape and cardboard.”

Students in the First Lego League Juniors group work together on a project.

Hadder is referring to her older students, seventh and eighth graders, who make up the First Tech Challenge group. The older students are given a kit to work with but make their robots from scratch.

The 2019 theme is Into Orbit where teams “explore, challenge and innovate in the vast expanse of space,” according to the First Lego League website.

“They have tiny notebooks they fill out that are engineering notebooks and they have little problems they have to solve,” she said.

The two older groups, the First Lego League and First Tech Challenge, will go to several competitions this year.

“It was amazing. We are a little behind because we got our kit kind of late,” Hadder said. “But since we have two qualifying matches, we figured we’d go to the first one and learn a lot and then go again.”

At the competition each team gets two and a half minutes to manage as many missions as possible on a small playing field with models made from Lego bricks. Referees evaluate the robot game matches ensuring teams follow the rules.

Students from Heritage Charter School and WEMS work together on robotics projects.

In addition to building a robot, each team is required to choose a project connected to the yearly topic they would like to research. Teams research and analyze a problem, find a research question, consider expert opinions, develop an innovative solution and share their findings with others.

On the tournament day, the teams present their research findings to the judges. The teams are encouraged to present their findings in unique ways that can be creative and fun.

WEMS First Tech Challenge team will have one more chance to compete and attempt to qualify for the state tournament.

WEMS First Lego League will also be competing this year and will have their first meet in Flagstaff Dec. 8.

First Lego League is an international organization and competitions happen all over the world, starting with regional competitions and then progressing on to state and national events.

More information about First Lego League is available at firstlegoleague.org.