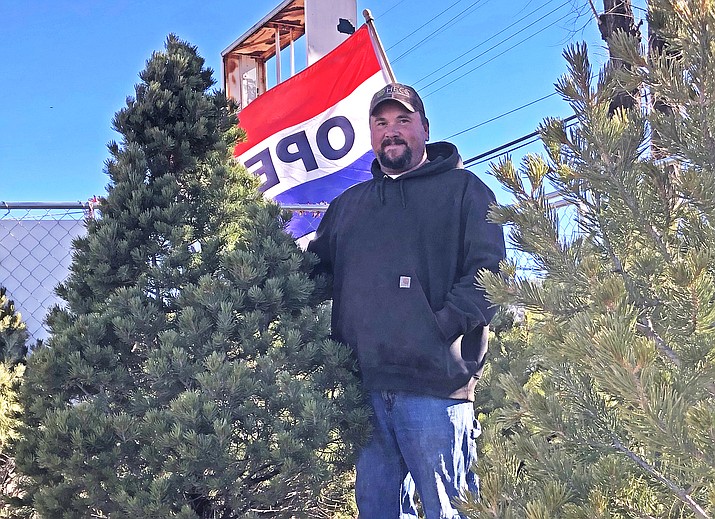 The owner of Juniper Creek Outdoors and a long-time resident of northern Arizona, Overfield feels a strong connection to the community and likes to reach out to help when he can.

“A lot of people were asking me about trees, I knew there was a need,” Overfield said.

Overfield decided to look into supplying trees for the community and got in touch with a friend who sells trees commercially.

“These came from the Babbitt Ranches,” Overfield said.

Ovefield’s friend had been in the commercial Christmas tree business for years, but has since become semi-retired.

“They would take 700 trees to Kingman every year, but he doesn’t do it as much,” Overfield said. “I told him I would really like to have a lot for the people in Williams. He said, ‘Let’s go cut some trees.’

Overfield brought the first batch of 26 pinyon pines to his store on Grand Canyon Boulevard mid-November.

“We decided to cut on a need basis, which has been fine, but we’ve been really going through them,” he said.

Overfield said he buys the trees at wholesale and has kept the cost down to help out families during the holidays.

“People are driving to Flagstaff to buy them,” he said. “In Flag they are getting $80-90 for these things,” he said. “I’m selling the smaller ones for $30 and the larger for $40. I’m not doing it for profit. It’s just so everyone can have a tree.”

Although Overfield is busy with customers during the fall hunting season, he said he tries to make time to help those during the holidays.

“A lot of people are waiting on their paychecks,” he said. “We can deliver them if people don’t have a way to get them home.”

Overfield said the store plans to continue stocking the trees through Christmas.

“It’s been popular, we’re going right through them,” he said.

Juniper Creek Outdoors is located at 419 N. Grand Canyon Blvd. in Williams. It is open seven days a week from 7 a.m. to 7 p.m.