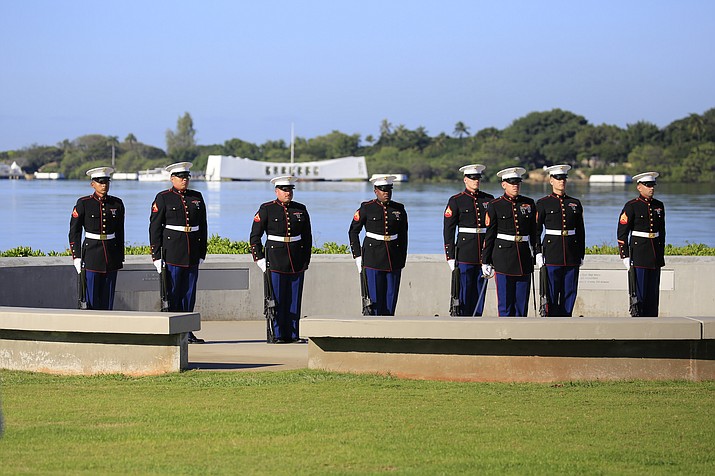 December 7, 1941; a morning just like any other at the U.S. Naval Base at Pearl Harbor, Hawaii. Over the course of just two hours, the entire world would change.

At 7:48 a.m., more than 300 Imperial Japanese attack planes swarmed the American fleet in an unprovoked attack — the US had not yet entered World War II. The short attack damaged or destroyed more than 20 naval vessels and 300 planes; 2,403 men were killed and another 1,178 were wounded.

Of the eight U.S. battleships damaged or sank that morning, all were raised except one. Six went on to continue fighting, as Congress declared war on Japan the following morning and Germany and Italy three days later.

Only the USS Arizona remains where she sank at Pearl Harbor 75 years ago. Annual pilgrimages by survivors, both civilian and military, and their families have been held at the site, but have been suspended since earlier this year.

The National Park Service (NPS) expects the USS Arizona Memorial dock repair project to be complete by March 2019, allowing visitor access to the memorial to resume.

The design phase of the project was recently completed, allowing for the development of a more precise timeline for the repair process. Unfortunately, it will not be completed in time for National Pearl Harbor Remembrance Day on December 7. Since May, the NPS has worked with its partners in the U.S. Navy and U.S. Air Force to ensure repairs are made as quickly as possible with special consideration given to the national significance of the site.

“Not being able to welcome survivors and their families on the USS Arizona Memorial this coming December 7th is heartbreaking,” said Jacqueline Ashwell, superintendent of WWII Valor in the Pacific National Monument, who oversees the memorial. “After exploring multiple options, we are working with our friends in the U.S. Navy to hold an intimate ceremony aboard a vessel adjacent to the USS Arizona. The Navy has been our partner every step of the way, and I could not be more grateful for their support.”

The boat-based ceremony will include a floral tribute and will also allow survivors, their families, and other key dignitaries to pay their respects to the fallen at the USS Arizona. This special ceremony will be in addition to the full land-based commemoration ceremony at the Pearl Harbor Visitor Center.

While the repair process continues, visitors will continue to see a 25-minute documentary film followed by a harbor tour of Battleship Row on U.S. Navy vessels which pass as close as possible to the USS Arizona Memorial. The NPS will continue to provide live or recorded commentary in an effort to maximize the visitor experience. Reservations are encouraged, as tickets for these programs continue to be fully distributed each day.

A World War II museum in Massachusetts is displaying artifacts commemorating the Pearl Harbor attack ahead of the Dec. 7 anniversary.

The International Museum of World War II in Natick says it recently acquired a life ring (flotation device) from the USS Arizona.

The museum, located in the Boston suburb of Natick, also displays many other artifacts related to the attack.

Among them is Japan’s formal declaration of war against the U.S., pieces of Japanese planes shot down at Pearl Harbor and women’s panties that read: “Remember Pearl Harbor, Don’t Get Caught with Your Pants Down.”

The coastal minesweeper Condor photographed in 1941. Condor was at Pearl Harbor on Dec. 7, 1941 and is believed to have been the first U.S. ship to make contact with the enemy (Photo/U.S. National Archives)

He was assigned to the minesweeper Condor when Japanese war planes bombed Pearl Harbor.

Hours before the attack, he and others had spotted a Japanese periscope near the harbor, an enemy mini-submarine destroyed by the warship Ward.

Soon after, his ship docked, and he returned to his nearby home. Minutes later, he would race back to the harbor when Japanese warplanes began to attack.