All in a day's work: Water hauler tackles fire 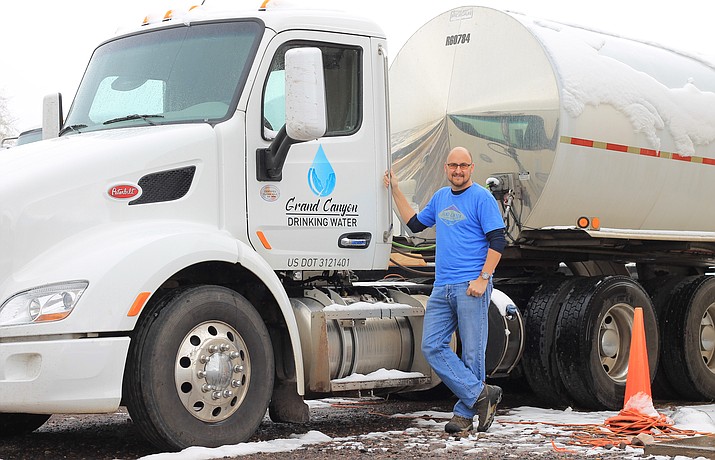 Brian Predmore stands next to one of the Grand Canyon Drinking Water trucks on State Route 64. Predmore is credited with helping put out a shed fire while delivering water to a Garland Prairie residence. (Wendy Howell/WGCN)

WILLIAMS, Ariz. — Commercial water hauler Brian Predmore woke up prepared to do a little accounting and maybe deliver a few loads of water to his residential customers, but little did he know he would add firefighting to his duties that Tuesday morning.

On Nov. 13, Predmore, who is an accountant and part-time delivery driver for Grand Canyon Drinking Water, was delivering water to Garland Prairie resident Alan Mularkey when a fire erupted in an outbuilding on the property.

“I saw smoke coming from the shed which I thought was strange, but at first I thought maybe they were smoking jerky or something like that,” Predmore said.

Predmore said Mularkey had requested the company fill one of the ranch’s large water tanks and a small horse trough that morning. The tank was larger than the capacity of the truck, so Predmore planned to do more than one trip to fill it.

“We checked out the road that weekend and figured we would need to take our small truck, which is our Ford that holds 2,000 gallons,” he said. “So I would have to do two trips since he needed more than 2,000 gallons.”

Predmore said he met Mularkey on his initial trip to the property and they discussed which tanks would be filled. Predmore filled the tank next to a hen house and then returned to the station to refill his truck for the second delivery.

“After I filled up and went back out there I noticed the shed smoking,” Predmore said. “It wasn’t smoking the first time I was out.”

Since Predmore had never delivered to the residence before, he wasn’t sure if the smoke was an actual fire.

“I’m kind of new to the area, and wasn’t sure what was going on,” he said.

As Predmore finished filling the tank, which was just a few feet from the 400-square-foot hen house, he noticed smoke coming from the roof, but no flames.

“I figured I’d go fill up the tank at the house and was just hooking up the hoses there when I heard some farm hands yelling ‘The barns on fire, the barn’s on fire!’ he said.

Predmore walked back to the hen house and asked the men if he could help. The workers said they had no way to put out the fire since their tank hose was melted inside the hen house.

“I realized my truck was mostly loaded so I ran back to get the truck and drove it over there,” he said. “By that time the wall was on fire, so we hooked up the (truck) hose.

The tank still had 1,600 gallons in it, so Predmore fired up the pump while the other men began dousing the fire with the hose.”

As the hen house burned, an overhanging ponderosa pine tree also caught fire, but the men were able to put it out.

With a limited capacity of water, the men closely tracked their water usage and by the time the tank was empty, the fire was nearly out.

“It was kind of like a bucket brigade, but with a little more technology,” Predmore chuckled.

Mularkey credits Predmore and the ranch hands for preventing a potentially devastating fire.

“The fire got hot enough in such a quick time that it actually melted the windows, they are completely bubbled out,” he said.

Several hens died from the smoke from the fire, but Mularkey said because of the men’s quick thinking, the fire was extinguished before it spread to the forest. The building sustained significant damage, but wasn’t a complete loss.

“If it was full we could put 100 hens in there; thank goodness it wasn’t full though,” he said.

Mularkey said the fire most likely started from an electrical problem, possibly from a heat lamp in the hen house, but at this time there wasn’t a definitive cause.

“It was just a godsend (that Predmore was there),” Mularkey said. “It was a fluke and a very lucky thing.”