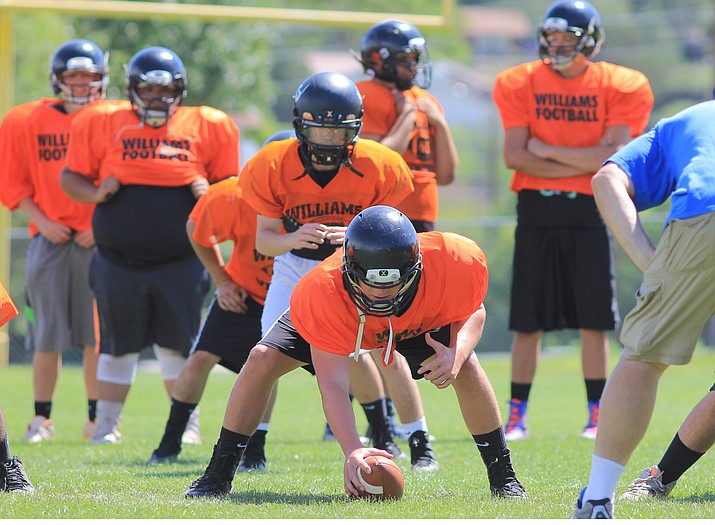 Players work through maneuvers during an early season practice. The Vikings beat Anthem Prep in their first game of the 2018-2019 season Aug. 25.

WILLIAMS, Ariz. — The Williams Vikings football team finally got its first taste of competition for the 2018-2019 season as they faced Anthem Preparatory Academy in Anthem Aug. 25.

The Vikings easily rolled-over the Eagles in the 58-12 rout, pulling down 30 points in the first quarter, 21 points in the second and seven in the third.

The Eagles only scoring was in the fourth quarter, where they were allowed 12 points.

After a big first quarter, the Vikings entered the second quarter with Kolby Payne connecting with David Lozano on a 27-yard pass, and Chance Pearson carrying the ball twice to score.

In the third quarter Mario Vazquez ran the ball for a touchdown and Lozano had a PAT.

Christian Weissmueller and Preston Blackledge brought in two touchdowns for the Eagles in the fourth, although both conversions failed.

The Vikings return to Williams for their first home game of the season Aug.31. They will face the Salome Frogs at 7 p.m. at Williams High School.