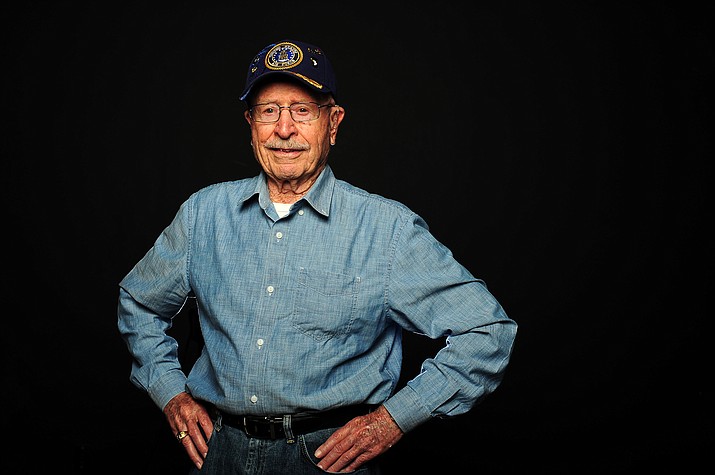 Retired Chief Master Sgt. Walter Olmstead Jr., a World War II veteran, visited Whiteman Air Force Base, Missouri and got a chance to see how U.S. Air Force bombers have evolved since his time in the service. In his 25-year military career, Olmsted logged more than 200 combat hours in World War II as a tail gunner of the B-17 Flying Fortress. He has also flown in the B-26, B-29 and B-50, among others, and was later part of the B-52’s maintenance crew. (Courtesy of Whiteman Air Force Base)

WHITEMAN AIR FORCE BASE, Mo. — After spending most of his life on military bomber airplanes, 96-year-old Walter Olmsted Jr. of Williams, Arizona, recently got his first up-close look at the Air Force’s youngest bomber: the B-2 Spirit.

Olmsted traveled from his Arizona home to Whiteman Air Force Base to visit family. His trip left him awestruck, and also feeling nostalgic about his time in various bombers.

In his 25-year military career, Olmsted logged more than 200 combat hours in World War II as a tail gunner of the B-17 Flying Fortress. He has also flown in the B-26, B-29 and B-50, among others, and was later part of the B-52’s maintenance crew.

The B-2, however, is not like the other bombers, Olmsted said. During his visit to Whiteman AFB, Olmsted was able to see the B-2 on display as well as talk with some of the Airmen who maintain it. He also met Brig. Gen. John Nichols, commander of the 509th Bomb Wing, and Chief Master Sgt. James Lyda, the command chief of the 509th Bomb Wing, who thanked him for his service and commended his experience with military bomber planes.

Aside from its unique batwing shape and its two pilots’ close quarters — “I couldn’t get over how small the cockpit is” – Olmsted was most awed by the B-2’s electrical system.

“The whole inside is covered with instruments,” he said. “It’s completely different (from the bombers of his Air Force career).”

It’s a career that was nearly cut short by war, but, as luck would have it, ultimately included many bomber assignments and ended with a long list of military honors.

“I had a good life in the service,” the veteran said.

Olmsted was born in upstate New York on Sept. 22, 1922, and grew up on a dairy farm. He graduated high school just before Imperial Japan attacked Pearl Harbor on Dec. 7, 1941 and the U.S. entered the war. He was 19.

“I enlisted to avoid being drafted,” he said.

Olmsted was sent to Fort Dix, New Jersey, and put on kitchen duty, until one day, scrubbing out trash cans in the mess hall he was approached by a lieutenant.

After being shuffled around various bases for training, the newly-minted Airman was stationed in England as part of a 10-person B-17 crew. He was the eyes and ears tracking the aircraft behind theirs, Olmsted said.

He flew more than 40 missions over Europe from 1943-45. His plane — Dearly Beloved — came under fire during one of those missions. Olmsted was sitting in his ‘office,’ as he referred to his spot in the airplane’s tail, when Dearly Beloved was hit and he was struck in his hip by a bullet.

Olmsted recovered with 14 stitches and still has part of the bullet that was removed.

“I was lucky on that deal,” he said. “It never flew again after that, it had so many holes in it.”

After a brief military hiatus, Olmsted reenlisted in 1948 and was part of bomber flying missions during the Cold War. He eventually transitioned to maintenance for B-52s until he retired as a chief master sergeant in 1970.

Olmsted was awarded the Distinguished Flying Cross, a Purple Heart and numerous air medals and accolades, including the Meritorious Service Medal at his retirement.

Olmsted knows, as evidenced by an aircraft like the B-2 Spirit when compared to the Dearly Beloved B-17, that the Air Force today is different from the Air Force he knew.

Still, he couldn’t be more proud of his family’s tradition of service, he said. His brother also served in the military, as did his son, Walter Olmstead III, who accompanied him on his recent visit to Whiteman AFB along with two of his three daughters.

Olmsted served in the Air Force for 26 years. His oldest daughter is an Air Force major and the other two are civilian employees at Air Force bases — including Lorena Olmsted, who is part of Team Whiteman.

It’s a family legacy that lives on.

“I was in the Air Force for 25 years and I wouldn’t change it for the world,” Olmsted said.

Editor's note: Olmsted met his wife, Eva, at a dance in Newport, New York after World War II. Eva had worked at a shoe factory during the war. They were married for 62 years until her death in 2008. After his retirement, the Olmsteds retired to Williams. Every year since his wife’s death Olmsted has pursued his love of traveling and spent time in Australia, Egypt, the Panama Canal, England, Scotland, Wales, France, Italy and Hawaii. He is an active member of the Williams community and participates in many veteran related events every year. Visit www.williamsnews.com for more articles and a video interview with Walter Olmsted.