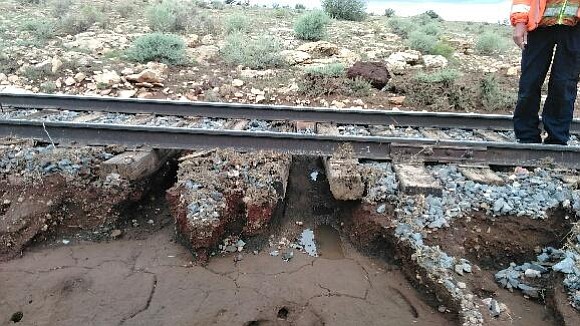 WILLIAMS, Ariz. — Passengers on the Grand Canyon Railway were forced to make alternative plans following a washout of a portion of the train tracks at milepost 40 heading north to the Grand Canyon.

The washout occurred sometime either on the evening of Aug. 22 or the morning of Aug. 23 and was discovered by a Grand Canyon Railway track inspector during his daily inspection of the tracks.

“It was probably about 8:45 a.m. that we first started hearing about it,” said Grand Canyon Railway’s Chief Mechanical Officer Eric Hadder.

The washout occurred around 10 miles north of Valle in an area that typically does not have major flooding. Hadder said there has been one washout in the same area that he knows of. He said the location is a flat, high desert area with few trees.

“There’s not a defined creek bed that regularly sees water, but there is a low spot so that if you get enough water in the surrounding hills adjacent to the tracks or even a couple miles away then that’s where all the water will drain,” he said. “There’s nowhere else for it to go.”

The flooding washed out the roadbed under the track leaving the rails and the ties suspended in the air in several places. It also washed out the embankment adjacent to the track so there was no support structure on the outside of the railroad ties.

Hadder said this type of washout is not common. He said the last washout on the railroad tracks that he could remember was more than 10 years ago.

Hadder has worked for Grand Canyon Railway for around 20 years and said during his employment he can only remember five or six times the tracks have washed out.

“Most of those were in the first 10 years that I worked here,” he said. “Since then the track crew has done a pretty good job of improving drainage out there along the tracks. It takes a very significant amount of rain in a small area, in a small timespan in order for us to have any significant problems.”

The train, which is scheduled to depart daily from the Williams Train Depot at 9:30 a.m., was cancelled. The railway is currently running one train per day to the South Rim with an average of 350 people onboard.

“Originally they were thinking they would just delay the train two hours and hope that would give us enough time to get a temporary repair done and they could get the train past,” Hadder said. “I think it was around 11 o’clock that they decided to cancel the train for the day.”

Passengers were either given a refund or asked to reschedule and around 150 people were shuttled to the Canyon.

Four members of the Grand Canyon Railway track crew and two employees from the mechanical shop used a Bobcat and a backhoe to temporarily fix the track for the train to cross Aug. 23. Hadder said three train cars were used to haul rock ballast to the site for initial repairs and four other cars of ballast were taken to the site later on. Crews used the ballast to build up the rock structure and rebuild the foundation beneath the railroad tracks.

“We used that rock as fill material in order to repair the washed out section,” Hadder said.

Hadder said the rails and ties did not require replacing and were left in place. These repairs allowed the train to resume its regular schedule to the Canyon Aug. 23.

“I’m sure they put a speed restriction over that portion of the track,” Hadder said. “Normally they would run (the train) at 40 mph and so they probably ran it at five or 10 mph. They still had more work to do to make it more secure —because the ground is wet you have to wait for (it) to dry out a little bit before you can pack it really good and tight.”