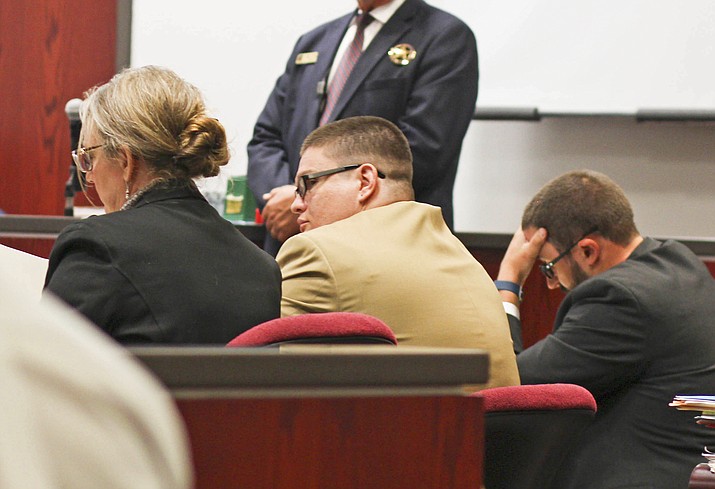 Derrick Barnett listens to the opening statement of lead prosecutor Ammon Barker at Coconino County Superior Court Aug. 21. Barnett is charged with first degree murder in the killings of Williams residents Michael and Nora DiMuria. The trial is expected to run through Sept. 21.

Derrick Barnett faces two charges of first-degree murder in the May 2017 slayings of 64-year-old Nora DiMuria and her 67-year-old husband Michael DiMuria in the rural area north of Williams.

The murder trial began in Coconino County Superior Court Aug. 22 with the prosecution portraying Barnett as a ruthless killer who not only killed the couple, but also their dog, with the defense calling him a frightened thief who “acted incredibly inappropriately.”

Barker started the trial before a 15-person jury in a relatively vacant courtroom and painted a picture of a desperate man who Barker said turned greedy and violent on May 1, 2017 when he killed the DiMurias, burglarized their home and killed their dog.

Following a tip and cooperation from several law enforcement agencies, Barnett was arrested in Colorado May 5.

Barker will argue that after an altercation with family members, Barnett left a wooded campsite north of I-40, leaving behind cooking equipment, and hiked several miles before encountering the DiMuria’s home. He then allegedly shot and killed Michael in the late afternoon and Nora later that evening. The prosecution alleges after the murders, Barnett stole multiple items from the home and fled to Colorado in the couple’s white Jeep Liberty. The vehicle was later found in Colorado, and Barnett was arrested in possession of items stolen from the home.

Nora and Michael DiMuria were killed in May 2017.

“It is safe to say in those days Michael and Nora were living their dream,” Barker said to the jury in his opening statement. “The defendant had no previous connection with Michael and Nora. He was a stranger, but in a single day he destroyed the lives they had built for themselves in that quiet country home.”

Barnett’s attorney, public defender Roberta McVickers, painted a different picture for the jury during her opening argument, stating that Barnett made some poor decisions but was ultimately a thief who happened to be in possession of a murdered couple’s property.

“Ladies and gentlemen, possession of stolen property in Colorado does not a murderer make,” McVickers told the jury during opening statements.

The prosecution and defense both agreed Barnett violated his probation when he asked his father, Williams resident David Martinez, to pick him up in Colorado and let him stay in Arizona with him, but McVickers states the evidence will not prove Barnett was in the DiMuria’s home, nor did Barnett display the type of behavior of someone who had committed a homicide.

“Just keep in mind things are not always as they seem,” she said.

Barker stated that when Martinez discovered that Barnett was violating his probation, a confrontation ensued between the two with Barnett leaving the campsite and Martinez returning later to remove the trailer. Barnett allegedly then began hiking north with a backpack and a .22 caliber rifle.

“The land he was traveling on was pretty desolate, not a lot of residences, mostly forest land and ranch land,” Barker said. “He walked about three miles before he stopped to make a campfire.”

Barker said the smoke from that campfire was possibly what Michael DiMuria and handyman Anthony Watson saw from the porch of the DiMuria’s home the afternoon of May 1.

Watson, who testified Aug. 21, said he was at the DiMuria’s home that day completing work on the mudroom. At the end of the day, DiMuria invited Watson to share a beer with him on the back porch. That was when the two saw smoke from a small fire which Michael said was “uncommon.”

Barker said some time after Watson left the home, Barnett allegedly came on to the DiMuria’s property and shot Michael three times in the head with .22 caliber rounds, near a guest house on the property. He then left the body and covered it with two rugs.

“After the defendant killed Michael he went in to the house and pillaged it,” Barker said.

Barker stated that at some point, Barnett killed one of the DiMuria’s dogs inside the home, and went through the couple’s personal items and ripped out a small safe that was bolted to the ground. Barnett also found two firearms on the property including a .22 caliber handgun and a 9mm handgun, both belonging to Michael.

After completing a 12-hour nursing shift, the prosecution said Nora returned to the home around 9 p.m. and as she entered the front door was “met with a barrage of bullets” from a 9mm firearm. Barker said the defendant “ambushed” her as he positioned himself behind the house and shot through the kitchen window.

He said Nora moved from the living room into the kitchen and into an adjacent bathroom as the defendant continued shooting at her. Barnett followed her into the bathroom where he killed her after shooting her in the arm and head at close range.

“When she put her arm up to protect herself there was stippling stuck to her wrist, indicating that the muzzle of that gun was no more than two feet away,” he said.

McVickers said the evidence will not support Barker’s sequence of events, however.

McVickers presented the idea that a gunfight occurred at the home and evidence will show that three guns were fired.

“Two calibers, but three guns,” said McVickers. “There was a gunfight and there’s no proof that Derrick was ever at the house. There’s no fingerprints, no hair, no DNA.”

Barker questioned Cory Stevens, the neighbor who went to do a welfare check of the DiMuria’s the morning of May 2. Stevens said he arrived at the DiMuria’s home around the same time as Watson, who had returned to discuss the remodel with Michael.

Stevens and Watson approached the backdoor of the home where they saw the broken kitchen window and the back door slightly ajar.

Watson said when he saw the broken window he got a “queer feeling” and yelled to see if anyone was inside. He said he saw a rifle near the couch, and tools on the table and floor.

Stevens went ahead of Watson and found the body of a dog in the kitchen and Nora’s body in the bathroom. He quickly retreated and told Watson and his wife “we need to get out of here.”

Stevens and the Watsons left the home while Stevens called 911. Shortly after, deputies arrived and cleared the home.

The trial is set to continue this week with more witnesses to be called by the state. The trial could continue through Sept. 21.