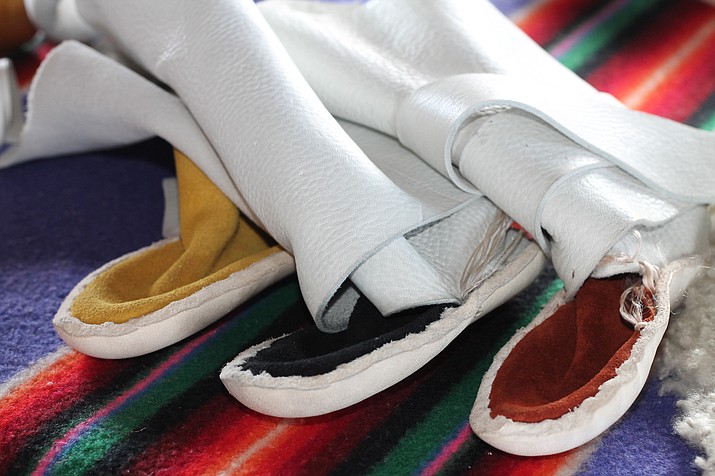 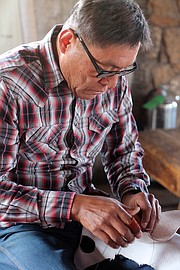 GRAND CANYON, Ariz. — Anyone who has taken a hike through red rock country can attest to the importance of tough, comfortable footwear. Hiking boots of every make and model abound, but sometimes nothing can beat a good, old-fashioned pair of moccasins.

Made of tough cow hide on the bottom and buttery-soft leather on top, Bill Thomas Jr. has been crafting custom-made moccasins for over a decade.

It’s a craft he learned from both his grandparents, still a highly sought-after art in the age of rubber and nylon.

Thomas is a teacher by trade, and making moccasins is something he does as a hobby. He doesn’t operate out of a shop, but takes custom orders in any size or color. Working from a footprint, he cuts a tough piece of cow hide, nearly half an inch thick, to fit the shape of a person’s foot. The sole is tough and difficult to shape, but Thomas said all it takes is a bit of water to make the material workable.

“I just spray it down with a little water and it becomes soft enough to work with,” he said.

After cutting the sole and spraying it down, Thomas gets to work sewing the soft leather for the top. Traditionally made of cow or deer leather, the moccasins come in a variety of colors, and each tribe has its preference.

“Navajos are known for the red plant dye they use to color the leather,” he said. “Our cousins the Apaches favor the gold color.”

Other common colors include black and brown.

Thomas explained that there is also a difference between the style of moccasins worn by women and men. Men’s moccasins typically come just above the ankle and would be closed with buttons or ties. Women’s moccasins are more ceremonial in nature and include up to four or five feet of soft white leather to be wrapped all the way up the calves.

Thomas sews the leather to the tough cowhide using a waxed synthetic string, although traditionally he said the moccasins would have been stitched with sinew from a deer’s spine. Once the top is attached, the damp cowhide will curl up to protect the sides and arches of the feet. Dried and hardened, the cowhide can cushion the wearer’s foot against even the most stubborn sharp rocks.

Thomas takes custom orders. Men’s style moccasins are $135 a pair and women’s wrap-around moccasins are $235. He can be reached at b_thomasjr@yahoo.com.