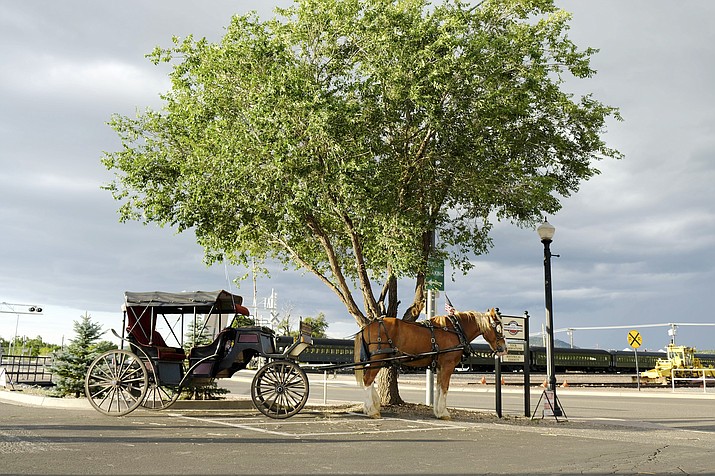 Grand Canyon Carriage Works was asked to move from downtown Williams for parking in a red zone. The company is now operating from the Williams Visitor Center parking area. (Loretta Yerian/WGCN)

WILLIAMS, Ariz. — A petition to remove Grand Canyon Carriage Works from downtown Williams has stalled after the Williams Police Department confirmed the business has the right to operate legally.

The petition with 223 signatures was circulated by Williams resident Randy Sartor after a conflict between Sartor and a Grand Canyon Carriage Works employee after Sartor’s dog barked at the carriage horse. Sartor’s petition for the removal of the carriage company was based on his concern for safety and the carriage blocking traffic during peak hours.

“I have a petition going on. I have 223 signatures so far. I’m trying to get rid of the horse and chariot ride,” Sartor said at during a city council meeting where he addressed Williams city council members. “I think it’s a hazard to the locals and pedestrians — if that horse gets spooked … it’s going to be a horse. It blocks traffic and it doesn’t have proper lighting and it doesn’t pick up its horse crap. I (have) lived without it years ago and I can live without it now. I just don’t see no need for it now.”

Williams Mayor John Moore deferred the situation to Williams Police Department, saying the city was only responsible for issuing licenses and permits to operate and not the enforcement of parking or traffic flow.

“We govern what they do on the streets,” said Williams Police Chief Herman Nixon. “Any horse driven carriage has to follow the traffic laws.”

According to Nixon, the carriage company has not violated the law and has done everything the police department has asked of them. This includes vacating Second Street and Route 66 where the carriage had parked until that point. The carriage was parked in a red zone and was blocking parking spots, according to Nixon.

Nixon said they were given a warning for having horse manure on the roadway. He said the company complied with the warning and have purchased diapers for the horses.

“They’ve basically complied with everything that’s been requested of them,” Nixon said. “At this point there is really nothing that can be done. They have a right to operate.”

As far as slowing down traffic, Nixon said there is not a minimum speed limit and the carriages are not violating any laws.

“The only location they’re holding up traffic is really between Third and Second or First (streets) where there’s parking on both sides of the road and the carriage can’t get over, but they attempt to get over as far as they can,” he said. “The problem you have in the summer time is you have foreign tourists who don’t know they can go around them and that’s why traffic gets backed up. Most locals have room to go around them.”

Grand Canyon Carriage Works owner Matthew Fizzell said he believes slowing traffic down through town can be a benefit to local businesses and also helps with safety.

“As far as the slowing of traffic down, I don’t see that as a bad thing,” Fizzell said. “Everybody knows the tourists run right through downtown, they run right through the stop signs. If we slow them down and they get stuck behind us (and) they don’t understand that they can go around, then they’re window shopping. They’re slowed down, doing five, 10 miles per hour — they’re looking.”

The carriage rides temporarily operated from the parking lot at Circle K in downtown Williams but were asked to move. They are currently operating in the public parking area behind the Williams Visitor Center.

Fizzell said he plans to talk to the city to try and obtain a reserved spot on a city street and possibly see if they can be grandfathered in as a vendor. He said he considers the company to be more than a vendor and said they are not selling a product but rather providing a service.

“I want to make sure we can do this the right way,” Fizzell said. “We’ve been a big part of this community for a very long time.”

The company has operated the carriage company in Williams since 1998, when they offered seasonal rides during the summer. In 2001, they made Williams their permanent location. Today, they operate year round, seven days a week.