Out of the past: Williams builds its first school 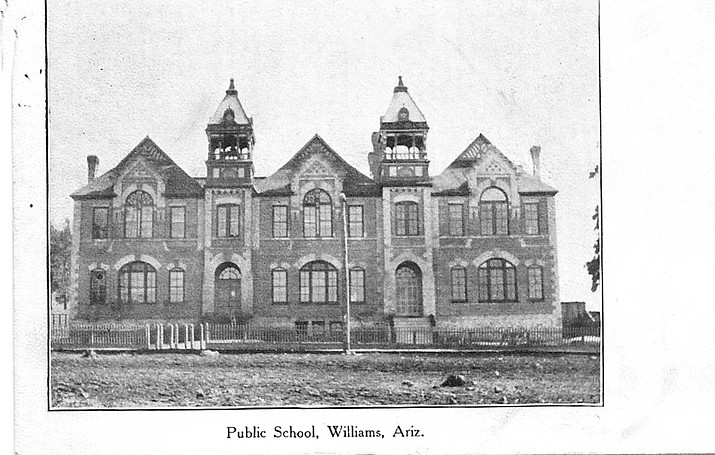 The first school in Williams was built in 1894 on Third Street and Sheridan Street. It burned to the ground in 1912. (Williams Historic Photo Project)

WILLIAMS, Ariz. — According to the minutes of the Coconino County Board of Supervisors in late 1892, a special election was held to determine if bonds should be issued to provide funds for a new school.

The citizens o Williams passed the proposal with an overwhelming majority. A two-room brick building was erected in 1894 at a cost of approximately $10,000.

That first school building for Williams was built by J.S. Button and had unusual brick construction and was two stories high and one room wide, and just one room deep. The building was placed at Third and Sheridan Streets on a half block purchased by the board of education.

Continued community growth led to the first expansion of the building in 1900. An additional two rooms were added. In 1906 T.H. Cureton arrived in Williams and took over the principalship of the school, which at that time had an enrollment of one hundred and sixty pupils.

A second addition was completed in 1907 with another two rooms, making the building three rooms wide, two stories high and one room deep. Until 1905, the school only had classes through the eighth grade. Ninth grade was added after Cureton's arrival in 1906.

The school was well attended and the community took pride in its construction, but in 1912 the building suffered a tragic fire.

"One cold day in January 1912, Williams was awakened at 6 a.m. by the loud pealing of bells and the shrill blowing of whistles. The leaping flames to the south, with telegraphic swiftness, announced to the remotest sections of town that the school house was on fire and that no possible force within reach could save it."

Many believed the lack of a town water infrastructure led to the demise of the school. According to the Jan. 20, 1912 edition of the Williams News, the building had fire protection in the way of water pipes and about 200 feet of hose, but unfortunately the pipes were empty. The nearest water, according to the account of the fire, was a block away at the public well.

No time was lost in taking steps to replace the building, however, and by September of that same year, students were occupying a new building on the same grounds.

Out of the past: a brief history of Williams and 121 years of education (part 1 of 3)
Out of the past: Education, school buildings and a new theater in early 20th century Williams (part 2 of 3)
More apartments coming to historic yellow school in Williams
Old Trails: Celebrating 60 years of lumber, hardware and more
Guest column<br><br>The story of Williams began on C. T. Rogers’ cattle ranch<br>
Contact Us
Submit Questions, Comments, or Story Ideas