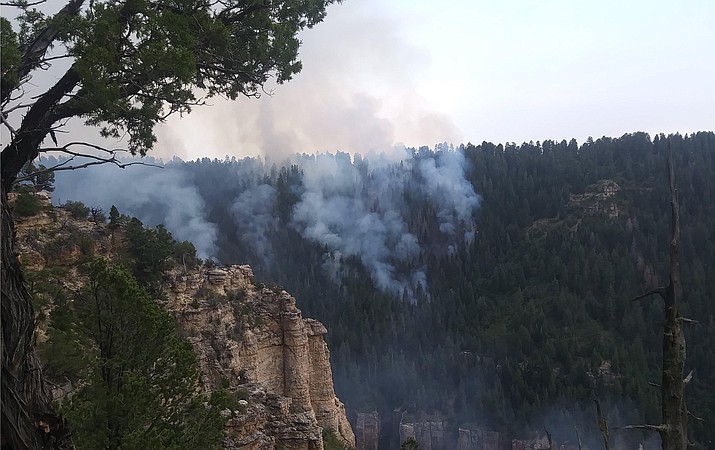 The Stina Fire has burned about 2,600 acres and is 20 percent contained. (Photo/Kaibab National Forest)

GRAND CANYON, Ariz. — Fire managers reported Aug. 18 that the Obi Fire has consumed nearly all of the fuels located in the containment area on the Walhalla Plateau. Fire behavior was observed as creeping with continued smoke production — the final acreage reported for the fire is 11,532. There were no injuries to firefighters or the public.

Resources currently assigned to the Obi Fire are being dispatched to higher priority incidents throughout the region. Remaining crews will patrol the Walhalla Plateau, assessing and repairing any damage done as a result of operations, and completing rehabilitation actions.

Temporary road and trail closures that were in effect for the Obi Fire at Grand Canyon National Park’s North Rim have been lifted.

“We’re happy to have these trails reopened, but we want visitors to be vigilant about fire-weakened or fire-damaged trees when hiking on the reopened trails.” said Obi Fire Incident Commander Paul Lemmon.

Because of continued fire activity and firefighter presence in the nearby Kaibab National Forest, some road and trail closures remain in place. Swamp Ridge Road, the North Bass Trail, the Powell Plateau Trail, Fire Point, Nankoweap Trail, and the Point Imperial Trail will remain closed until further notice.

Fire managers are continuously assessing conditions in the area and will work directly with and will immediately advise park managers as conditions change and it becomes safe to reopen roads and trails. Prior to visiting these areas, visitors should check-in at the Backcountry Information Center or the North Rim Visitor Center.

As the Obi Fire burns out, priority has shifted to full suppression of the Cat and Stina fires. According to a forest service spokesman, moisture has effectively calmed fire behavior. No growth has occurred on either fire for several days and fire managers are confident under the current conditions, fire growth is unlikely.

The Stina Fire, which resulted from a lightning strike July 26, has burned about 2,600 acres about 23 miles southwest of Jacob Lake. It is currently about 20 percent contained.

The Cat Fire began Aug. 6 and has burned about 3,700 acres in the Saddle Mountain Wilderness 25 miles southeast of Jacob Lake. It is currently zero percent contained.

Both fires have recently been transitioned to the Central West Zone Type Three Incident Management Team which was previously managing the Obi Fire.