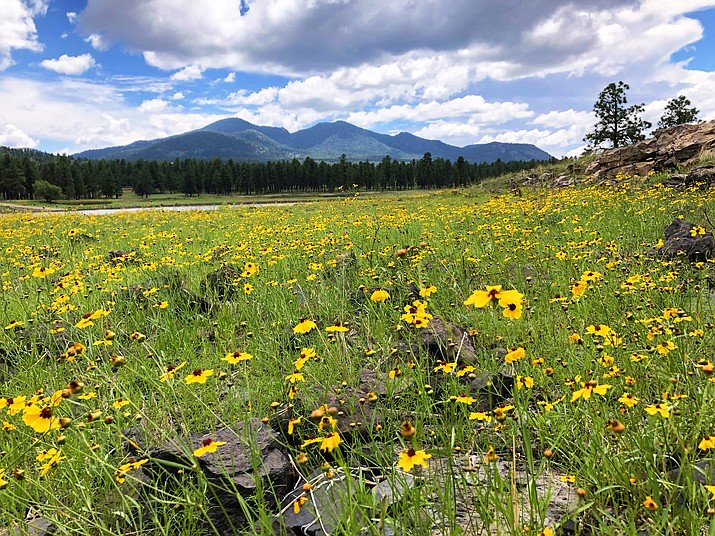 Fields of flowers have erupted at Cataract Lake and throughout Williams following several weeks of heavy monsoons. Despite the rainfall, Williams is below average for precipitation. (Wendy Howell/WGCN)

WILLIAMS, Ariz. — As northern Arizona reaches the midpoint of the 2018 monsoon season, some areas have seen massive precipitation while others are about average.

But how does Williams fare?

Mostly, the answer is pretty good.

After a very dry winter, the monsoon season has helped Williams get close to its annual average precipitation.

“Despite a streak of storms that Williams residents and visitors have experienced recently, the city is still a little below average in yearly precipitation,” said Brian Klimowski with the National Weather Service in Flagstaff.

According to data collected by the NWS, Williams has received 11.33 inches of precipitation since Jan. 1. A little below the average of 13.4 inches.

This time last year, Williams had received 16.26 inches of precipitation, which includes snow and rainfall.

“This monsoon, the rain has been highly variable around the Williams area,” Klimowski said. “I understand that some sites, especially north of the interstate, have had much more precipitation than the south side of town at our observation site.”

Klimowski said the ridge which keeps the monsoon moisture in place has been remarkably resilient this year.

“We’ve only seen minor adjustments to the position of the ridge since the monsoon started in early July,” he said. “Typically, we’ll see occasional troughs from the Pacific which sweep out the moisture for a few days, providing what we call a monsoon break. We haven’t seen a significant monsoon break yet this season — hence the robust monsoon that has been evident over much of Central Arizona.”

The onset of the monsoon season is indicated by a change in the weather patterns, particularly winds, which facilitate the increase in moisture from the south and east. This pattern change took place around July 5, said Klimowski.

Klimowski said over the past 20 years in Williams, eight years have seen below normal monsoon precipitation. Of the 10 most recent monsoons, seven have had above average precipitation in Williams.

According to the National Oceanic and Atmospheric Administration (NOAA), moderate to exceptional drought covers 30.7 percent of the United States, an increase from last week’s 30.2 percent.

The week of Aug. 14, a high pressure ridge in the jet stream flow kept the west warmer than normal and very dry during the week. However, above-normal precipitation fell across southern Arizona, courtesy of the summer monsoon, while the monsoon under-performed across the rest of the Southwest.

The NOAA Climate Prediction Center recently released its updated three month seasonal forecast for August to October. The report predicts above average temperatures for most of the nation, especially in the Northeast and West. The Southwest and parts of the Southeast should expect above average rainfall, with drier than normal conditions in the Pacific Northwest and Mississippi Valley.

El Nino (translated from Spanish as “little boy”) is a natural ocean-atmospheric phenomenon producing warmer-than-average sea surface temperatures in the central Pacific Ocean near the equator. It is usually marked by a warmer than average winter in the northern tier of the nation, with most of the southern sections of the country seeing above average precipitation.

NOAA data revealed that for July 2018, the contiguous U.S. temperature was 75.5 degrees Fahrenheit, 1.9 degrees Fahrenheit above the 20th century average. This tied with 1998 as the 11th warmest July on record. Much-above-average temperatures stretched across the West, Northeast and parts of the South. California had its hottest July and hottest month on record at 79.7 degrees Fahrenheit, surpassing the previous record set in 1931.

The July precipitation total for the contiguous U.S. was 2.80 inches, 0.02 inch above average, and ranked near the middle value in the 124-year period of record. Above-average precipitation was observed for parts of the Southwest, East Coast and Great Plains.

The year-to-date precipitation total for the Lower 48 was 18.65 inches, 0.56 inch above average, ranking near the middle value in the record.