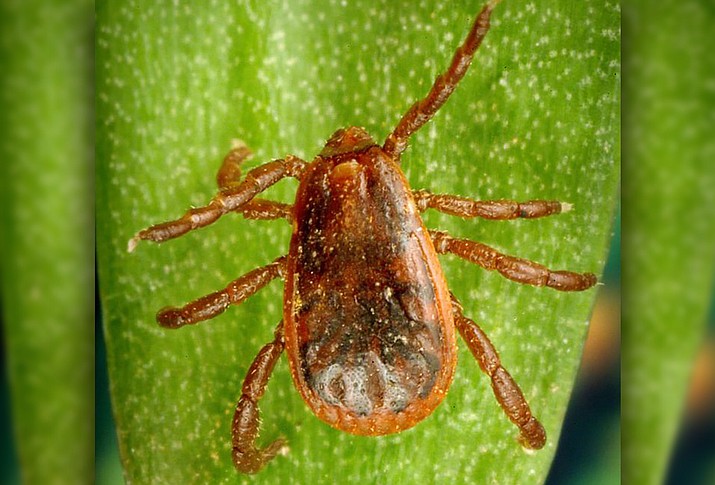 The brown dog tick ranges across the state of Arizona and can carry Rocky Mountain Spotted Fever, a serious bacterial infection for both dogs and humans. (CDC image 7646/James Gathany and William Nicholson) 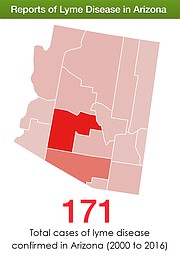 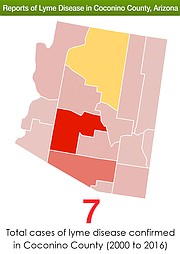 FLAGSTAFF, Ariz. — While plague-bearing fleas often command the attention of parents and pet owners, other tiny terrors may go unnoticed.

Like fleas, ticks can carry diseases that can be transferred to both animals and humans, and a new study by Northern Arizona University suggests their range includes Coconino County, as well as more than 80 other counties nationwide where they have never been previously reported. The study is based on a massive sample of more than 16,000 ticks collected from Puerto Rico and every state except Alaska.

Dr. Nate Nieto, associate professor in NAU’s Department of Biological Sciences, was a lead author of the study, which was conducted in partnership with the Bay Area Lyme Foundation. Nieto said the overwhelming study participation from residents nationwide indicates a desire and need for the information, which is often not collected by public health agencies if cases of a tick-borne illness have not been previously reported in a county.

“This study offers a unique and valuable perspective as it looks at the risk to humans that goes beyond the physician-reported infection rates and involves ticks that were found on or near people,” he said.

Lyme Disease, a potentially fatal infection carried by deer ticks, is one of the country’s fastest-growing infectious diseases. According to statistics released in 2015 by the Centers for Disease Control and Prevention (CDC), there are more than 329,000 new cases of Lyme disease each year. There have only been seven reported cases in Coconino County since 2000, according to TickCheck.com, a university-affiliated lab that specializes in tick-borne illness testing. Hard ticks, such as the deer tick that carries the bacterial cause of Lyme disease, have been reported for the first time in Maricopa and Pinal counties as a result of the study.

Because of frequent travel between Arizona’s valley and high country, Linda Giampa, executive director at Bay Area Lyme Foundation, said it is critical that residents throughout the country take precautions and know the symptoms of tick-borne infections, even in areas where ticks have not previously been shown to cause disease.

Because it is difficult to diagnose, Lyme disease often goes untreated, sometimes for years or even decades. Public health officials recommend those who have travelled to areas where deer ticks are prevalent see a doctor if chronic fatigue, unexplained rashes, achy, swollen joints, flu-like symptoms or changes in sleep or vision develop.

Lyme disease is not the only dangerous tick-borne illness, and Nieto points out that Rocky Mountain Spotted Fever, often contracted from brown dog ticks, is also a potentially-fatal bacterial infection. Nieto said brown dog ticks seem to do well across the entire state, and pet-owners should be particularly watchful, especially in areas where domesticated dogs may mingle with feral or wandering dogs.

Nieto said it is very rare for pathogen to transfer from an animal to a human. Using preventive flea and tick medications can alleviate the risk when hiking or spending large amounts of time outdoors for both human and animals.

Quick treatment is essential for Rocky Mountain Spotted Fever. Symptoms include fever and a tell-tale rash that develops soon after, along with headache, nausea, vomiting, muscle pain and lack of appetite. If any of these symptoms develop, the CDC advises seeking immediate medical care. Symptoms in dogs are not as easy to spot, but may include fever, abnormal bleeding, bruising, lack of appetite and aversion to movement. If these symptoms occur a veterinarian may run blood tests and prescribe antibiotics.

Tick-borne relapsing fever is also a concern in Coconino County, particularly for those who hike or recreate outdoors at higher elevations.

• Remove the tick as soon as possible.

• If tick mouthparts remain in the skin, leave them alone. In most cases they will fall out in a few days.

• Don’t use nail polish, petroleum jelly, or a hot match to make the tick detach.

• If you develop a rash or fever within several weeks of removing a tick, see your doctor. Be sure to tell the doctor about your recent tick bite, when the bite occured, and where you most likely acquired the tick.

The disease is carried by soft ticks, a different variety than deer or dog ticks. Nieto said very few people are likely to come into contact with them on the average day, but his lab at NAU does work to identify the disease in ticks around Coconino County. Soft ticks generally prefer to live in the burrows of rodents and rarely leave this plentiful food source, making it rare for humans to come into contact with them.

However, several youths at Camp Colton near Flagstaff were diagnosed with the rare disease in 2014, and a similar case was reported on the North Rim of the Grand Canyon in 2009. According to the CDC, exposure most often occurs when sleeping in rustic cabins that may house rodents.

Symptoms of the disease include a fever that occurs for three days, resolves, and then returns about a week later. According to the CDC, it can be easily treated with antibiotics.

In his lab at NAU, Nieto studies the insects and tries to assess the risk to the human population.

“Our main research goals are to determine how the pathogens are maintained in the wild and then how does this translate into risk for people and pets,” he said.

The recent study stemmed from a tick-testing initiative conducted by NAU and supported by the Bay Area Lyme Foundation. Ticks sent to the initiative from January 2016 to August 2017 were tested free of charge for four of the most common bacterial infections: Borrelia burgdorferi, which causes Lyme disease; Borrelia miyamotoi, which causes tick-borne relapsing fever; Anaplasma phagocytophilum, which causes human granulocytic anaplasmosis; and Babesia microti, a protozoan pathogen.