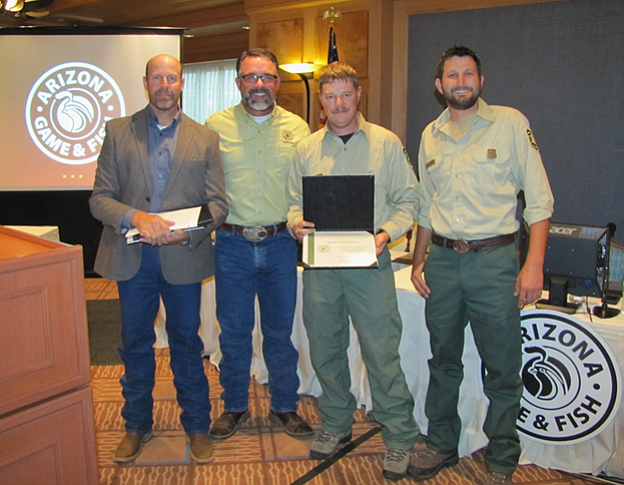 Specifically, the Kaibab National Forest was presented with a Commission Commendation of Achievement “for the continued partnership, stewardship, and unwavering commitment to wildlife conservation.” The recognition resulted from the two agencies teaming together during the exceptionally dry spring and early summer months to provide viable water sources for wildlife in Game Management Units 9 and 7W, which generally fall within the Kaibab National Forest’s Tusayan and Williams Ranger Districts.

“Due to the heightened fire danger and the additional fire resources we had available, we had the opportunity to provide some extra support to the Arizona Game and Fish Department,” said Jeremy Human, fire management officer for the Tusayan and Williams Ranger Districts. “Arizona’s wildlife is an important resource. A lot of what we do as an agency [Forest Service] is tied closely to the department’s wildlife management work, so this was an opportunity for us to be a good neighbor and do the right thing. We were able to accomplish meaningful work that made a difference when we weren’t actively engaged with responding to wildfires.”

Kaibab National Forest employees used large tenders to haul and deliver water to catchments that were identified as critical by Arizona Game and Fish Department wildlife managers. All told, more than 50,000 gallons of water were made available at priority locations across the forest, and hundreds of hours of equipment and personnel time were donated.

“We have a strong and ongoing partnership with the Arizona Game and Fish Department, and this was another example of how we can work together to improve outcomes for wildlife and support the missions of each agency,” said Travis Largent, wildlife biologist with the Kaibab National Forest. “We hope to continue our mutual efforts to achieve shared goals such as improving forest health and enhancing wildlife habitat.”

Water was a particularly scarce resource earlier this year due to the ongoing drought in Arizona and the extreme lack of winter precipitation. In fact, the Tusayan and Williams Ranger Districts had the driest October to June period on record in the past 25 years, creating potentially deadly conditions for area wildlife.

Across the state, the Arizona Game and Fish Department monitors and maintains thousands of water catchments in strategic locations. Because of the importance of these waters to diverse wildlife species and the exceptionally dry conditions prevailing in northern Arizona, the department faced the monumental task of trying to refill catchments that were quickly drying out statewide.

“They stepped in at a time when what we had in place wouldn’t have been able to cover the need,” said Nate Ragan, wildlife manager for the Arizona Game and Fish Department’s Game Management Unit 9. “They helped us when we needed it the most and got water to a lot of places that would have gone dry without them. It was a breath of fresh air to have that resource made available to us and to get the help when we most needed it.”

In addition to the Kaibab National Forest, many other partner and volunteer organizations also donated time and resources to the important work of sustaining these wildlife waters.