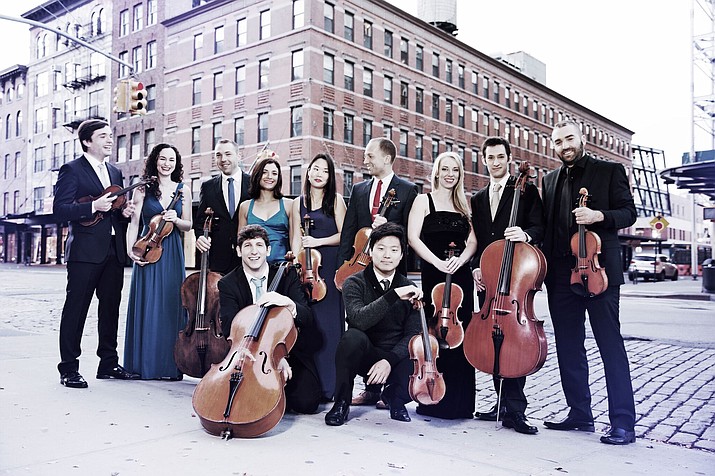 GRAND CANYON, Ariz. — In 1983, Robert Bonfiglio and Claire Hoffman had an idea – to fill one of the seven natural wonders of the world with the most glorious music they could muster. Thirty-five years later, their vision is still going strong as talented musicians make their way to the canyon once again for the annual Grand Canyon Music Festival.

The concert series will begin Aug. 24 and continue each weekend until Sept. 8. All performances will be held at Shrine of the Ages.

The festival has been a canyon tradition for more than a third of the park’s existence. The idea for the festival, which began in 1983, was formed by two friends and musicians — founders Robert Bonfiglio and Clare Hoffman — on a rim-to-rim hike. The pair performed a private concert for two park rangers at the bottom of the canyon, and the concept of performers of all genres filling the canyon air with music was born.

Featuring nine concerts — from chamber music to blues and jazz to modern pop performed by School of Rock students — the festival brings in artists of all kinds, according to Bonfiglio, who celebrates his birthday at the canyon each year during the festival.

“In ‘83 when we started this thing, my thought was that man should bring his best to this cathedral,” he said. “You bring the highest level of music into a place like this. There has to be an interconnection between art and this land. We are making a tremendous connection to this park.”

The Catalyst String Quartet, annual performers at the festival, will once again open this year’s event with concerts Aug. 24 and 25. The group, which was recently awarded a Grammy for their collaboration with jazz artist Cecile McLorin Salvant, will perform classic compositions from Franz Schubert and Phillip Glass along with modern numbers from Mohammed Fairouz and Caroline Shaw.

The Bonfiglio Group, featuring Bonfiglio on the harmonica, Joe Deninzon on Violin and Stephen Benson on guitar, will perform their annual concert Aug. 31. Benson, Bonfiglio and Deninzon will join festival co-founder and floutist Claire Hoffman return to the stage Sept. 2 for “A flute, a Recorder, 10 Strings and 64 Reeds, an exploration of popular music from the Renaissance through today.

A trio from the Manhattan Chamber Players will round out the festival with performances Sept. 7 and 8. Violinists Siwoo Kim and Luke Fleming, and Cellist Sujin Lee will perform symphonic classic from Beethoven, Mozart and Ravel with both Bonfiglio and Hoffmann.

Each year, several Grand Canyon School students participate in School of Rock, a weeklong seminar with Bonfiglio, Deninzon and Benson designed to teach students how to play popular music. After learning a few pop sings and how to perform them in front of an audience, the students, aged sixth grade through high school, will perform a concert at the festival Aug. 31.

Bonfiglio and co-founder Hoffman have also been reaching out to the Navajo and Hopi Nations for 20 years, integrating their musical culture into the more traditional classical music concerts of the festival. The Native American Composer Apprentice Program, started in 2001, invited youth from the Hopi and Navajo Nations to compose their own pieces of music, to be played at the festival.

This year, Navajo, Hopi and Salt River Pima-Maricopa youths interested in music have been studying with Navajo composers-in-residence Raven Chacon and Michael Begay for several months and will have their own original works played by the Catalyst Quartet during a concert Sept. 2.

“The first year we started NACAP, we had maybe four kids,” Bonfiglio said. “By the second year, there were 20 kids! There were so many that we started doing a special day on Sundays just for them.”

With the idea of making the festival accessible to everyone who loves music, there is no general admission charge. Guests will instead be asked to make a donation to the festival in the suggested amount of $15 for adults and $10 for children, based on previous general admission ticket prices. However, guests may give any amount they wish. Season tickets for all six concerts are available for a suggested donation of $90.

This year, Bonfiglio will also headline a musical cultural exchange to Cuba Jan. 4-11, 2019. As part of Cuba Rhythm and Views’ cultural exchange with Cuba, Bonfiglio, will perform with the Havana Chamber Orchestra and the Aldo López-Gavilán Quartet. He will also conduct a master class for some of Cuba’s most promising musicians at the Instituto Superior de Arte in Havana and the Benny Moré School of the Arts in Cienfuegos.

Other people-to-people experiences will include rehearsals and performances by such renowned groups as the National Ballet of Cuba, the Ballet Español de Cuba, as well as traditional Cuban music, Cuban Jazz and nightlife, architecture and historic preservation, visual arts, Cuban cuisine and paladares. The trip is available for everyone — more information about cost and occupancy is available at www.cubarhythmandviews.com/a-week-in-cuba-with-harmonica-virtuoso-robert-bonfiglio.

More information about the festival is available at www.grandcanyonmusicfest.org.