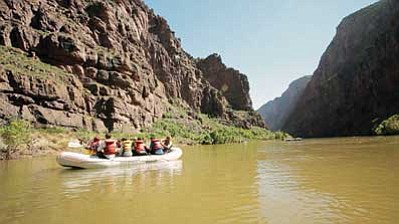 Rafting the Colorado River. <i>Photo courtesy of the Redford Center</i>

About 19,000 people annually go on multiday commercial whitewater rafting trips on the Colorado River. All start at Lees Ferry near the Arizona-Utah border, and some run 280 miles through the canyon to Lake Mead on the Arizona-Nevada border. Permits for self-guided trips are handled through a lottery system.

The Park Service announced earlier this year that it was soliciting bids for up to 16 commercial contracts for a 10-year period. The proposal raised the minimum franchise fee between 4 percent and 18 percent to between 5 percent and 22.5 percent, based on gross receipts.

Rafting the Grand Canyon is a bucket list item. The companies that run the commercial trips nearly sell out each year, and people can spend years waiting to get a self-guided permit through the lottery.

Members of Arizona’s congressional delegation, current contract holders and others objected to the higher fee and asked the Park Service to justify the proposed fee increase. The rafting companies said it would hurt their businesses, some citing increases in the minimum wage in Arizona and Flagstaff.

“We don’t want to price our product to the point it’s unaffordable,” said John Dillon, executive director of the Grand Canyon River Outfitters Association, a trade group representing contract holders. “You can’t continually pass that on and assume the general public is OK with that.”

The Western Congressional Caucus questioned whether the Park Service was adhering to its mandates and asked the agency to reconsider.

“The fact that these payments come out of gross revenues, rather than net profits, means that a concessionaire is required to make these payments, even if it means operating at a loss,” the group wrote to the Interior Department and the Park Service in April.

The Park Service canceled the contract proposal this week and said it would put it up for bid again next year after analyzing feedback. The current contracts have been extended until the end of 2019.

The Park Service controls what companies can charge for the trips. The agency said it determined potential bidders had a reasonable opportunity for profit under the proposal, even considering increases in business costs. It said rates are determined by the market, and it did not intend for the public to absorb the increases.

The Park Service collected nearly $5.3 million in franchise fees from the commercial trips in 2016, according to contract proposal. The Grand Canyon retains 80 percent of that money, and the rest goes to the Washington, D.C., office that oversees concession contracts, said Kris Kirby, a spokeswoman for the agency’s Intermountain Region in Colorado.

The commercial trips run from April 1 to Oct. 1 with a maximum group size of 32 people, including the guides. The group spends nights camping on beaches alongside the river and days navigating up to 165 rapids.

The trips include food, bedding and other supplies. The cost ranges from more than $1,000 to close to $6,000 per person depending on the length of the trip and the watercraft used.

Maintaining the current franchise fee would be acceptable, but the Park Service also has discretion to lower it to factor in other costs to the concessionaires, Dillon said.

“We understand the privilege it is to do business in our public lands, but 18 percent is high compared to any other place in the country that offers similar services,” he said.

The Interior Department, which oversees the Park Service, backed down earlier this year on another proposed fee increase to get into the country’s 17 most popular national parks after widespread opposition. The department initially proposed charging $70 per vehicle to visit the Grand Canyon, Yosemite and other iconic parks mostly in the West, but instead raised the cost $5, up from $30.

The change went into effect in June.