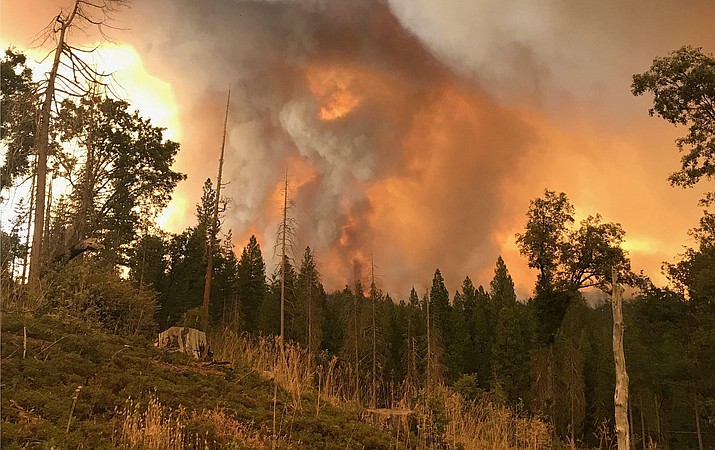 Most of Yosemite National Park is closed indefinitely due to the Ferguson Fire. (Photo/USFS)

TALKEETNA, Alaska — A temporary flight restriction is in place over part of Denali National Park and Preserve as search and rescue crews continue to look for the sight of a flightseeing that crashed Aug. 5.

The NPS high-altitude helicopter, along with an Air National Guard C-130 and two HH-60 Pave Hawk helicopters are attempting to reach the crash site.

The de Havilland Beaver took off from Talkeetna at 5:06 p.m. for a flightseeing tour around the Kahiltna Glacier. It was heading southeast at approximately 6 p.m. when it made impact near the summit of Thunder Mountain. Terrain in the vicinity of the crash site is characterized as extremely steep and a mix of near-vertical rock, ice and snow.

VOLCANOES NATIONAL PARK — Much of Hawai‘i Volcanoes National Park has been closed nearly three months because of hazards caused by frequent earthquakes triggered by collapse events at the summit of Kīlauea Volcano.

The temblors — more than 18,000 in the last 30 days — have wreaked havoc throughout the park. Jaggar Museum and the USGS Hawaiian Volcano Observatory buildings are damaged and stand empty. The summit crater, Halema‘uma‘u, has more than quadrupled in size as magma drains out to the lower East Rift Zone eruption outside the park.

YOSEMITE NATIONAL PARK — Because of increased fire activity in the areas adjacent to and on Yosemite National Park, park administrators and fire managers have made the decision to extend the current park closures indefinitely.

Fire managers are continuously assessing conditions in the area and will work directly with and will immediately advise park managers as conditions change and it becomes safe to reopen.

Firefighters remain committed to fully suppressing this fire and are actively engaged, taking action to limit the fire’s spread when it is safe to do so.