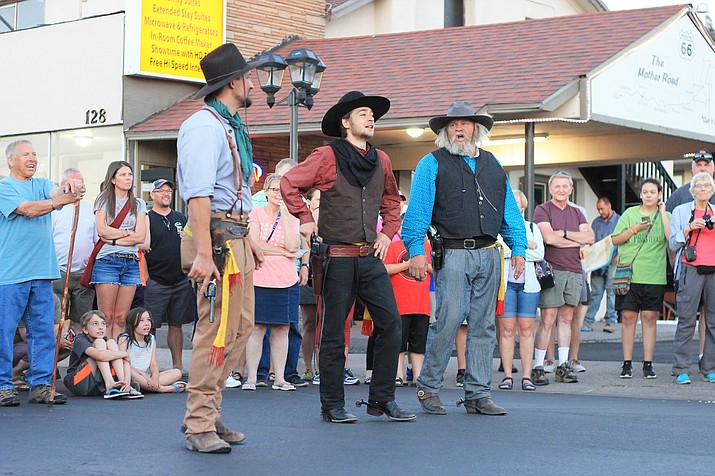 Thanks is not enough. I feel obliged to let all concerned know about our family vacation to Flagstaff and Williams this year with my five-year-old grandson Graham Dalton, Buckaroo I call him.

It started out with Flagstaff Rodeo, where he won his first buckle for mutton bustin'.

The next day we went on his first trail ride — in the Coconino National Forest, a dream come true for me, him and his dad. I always wondered if I’d get a chance to do it again as I did with my dad and my son.

There’s a little bit of cowboy in every little boy. Graham Dalton wakes up every day, puts on his jeans and boots and cowboy hat along with his vest and gun belt and lives every day in only a way a five-year-old can do, dreaming about being a cowboy and loving every minute of it. Like a lot of us do, dreaming about and watching the old cowboy heroes, John Wayne is his favorite. Some say the cowboy heroes are all gone and a whole lot are, but not all.

It seems in every generation a few Buckaroos keep them riding the old trails, fighting the bad guys — like horse thieves and bank and train robbers.

Which brings me to Williams, Arizona where we watched a bunch of good ole' cowboys re-enact some old west gun fights, which is where we first met Marshall Tucker before boarding the Grand Canyon Railway to the Canyon aboard a 1920s Pullman car. Windows open all the way, clickitty clack, there and back, Graham’s first train ride and train robbery.

On the way up, Marshall Tucker came through the car and joked with us and told Graham, ‘Watch that hat boy.’ Sure enough on the way back there goes his Stetson out the window onto the prairie, that was a heart breaker for our Buckaroo who never takes it off.

Not to make a long story longer, but we ran into Marshall Tucker in town and mentioned to him our bad luck. He told Graham he would send out a couple riders along the tracks a few miles out of town to see if they could find it when they did their next train robbery, but no guarantee.

Well it didn’t turn up. A couple of days later Marshall Tucker goes above and beyond and following the cowboy way sends Graham a new cowboy hat, spurs, lasso and a Marshall badge! Excited does not explain our feelings — not just for Graham but his mom, dad, me and Anma too!

It’s amazing to see someone you don’t even know go that far out of their way for a little Buckaroo. I told Graham the only thing I could, “That’s what cowboys do. That’s the cowboy way.”

There are still some heroes around today.

Thanks Marshall Tucker from your new friend Graham Dalton and his family.

P.S. Please thank the stunt men and the staff of the Grand Canyon Railway for making this a real cowboy vacation.