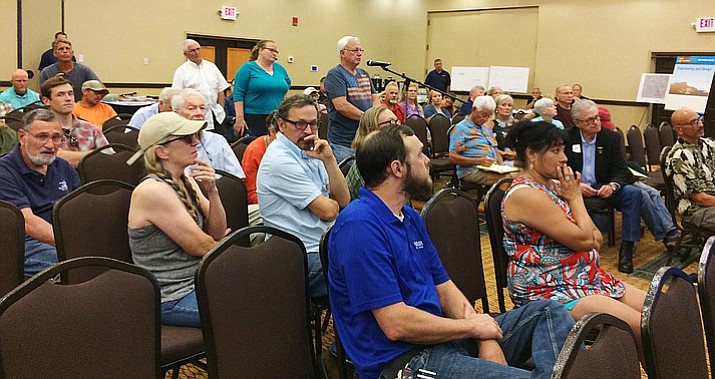 People with questions and comments on the proposed ITC Big Chino Valley Pumped Storage Project line up June 27, at the Prescott Resort. About 60 people attended the community meeting, most from Chino Valley and Paulden. (Sue Tone/Prescott Daily Courier)

PRESCOTT, Ariz. - About 65 people showed up at the Prescott Resort on Wednesday, June 27, for the afternoon community meeting with ITC on the proposed Big Chino Valley Pumped Storage Project, and about the same number showed up for the evening presentation.

Those asking questions in the evening session were residents from Chino Valley, Paulden and north Yavapai County, all living closest to the proposed project located five miles southeast of Seligman.

Most of the comments during the three-hour meeting had to do with people’s opinion that the drought in Arizona makes the Yavapai County location a poor choice for a closed-looped hydro facility that promises to generate and pump electricity. They shared their concerns about the impact on groundwater levels and private wells.

The Big Chino Valley Pumped Storage Project entails filling two reservoirs at differing elevations, connected by a tunnel and powerhouse, with an initial fill of 27,000 acre-feet of water. The downhill flow would generate electricity for 10 hours a day during periods of low demand, and store the energy for pumping 12-14 hours per day during peak demand. Reversible turbines pump water from the lower reservoir to the upper during periods of low demand. The facility would have an 80 percent pump-to-generator operating efficiency.

ITC is conducting numerous studies prior to filing an application with the Federal Energy Regulatory Commission (FERC). One is the groundwater modeling study that will result in determining what the impact will be on the Big Chino groundwater, Verde River and residential wells.

In producing the Groundwater Resources Modeling Study, hydrologist Don Poole said ITC Holdings, a subsidiary of Fortis Company, wants thorough, reliable results for predicting the effects of the project. “We want to produce a model that people can’t say, ‘You didn’t do this. You didn’t do that,’” he said.

Poole has some background information dating back to 2005. ITC will include other data such as evaporation and precipitation at a meteorological weather station, and how quickly water will recharge. The project will utilize water currently dedicated for agricultural use to run the pumping operation after the initial fill.

In answer to one question, ITC has not drilled test wells; it currently is relying on historical information from wells already on the property.

Linda Jensen of Paulden said the water needed for the initial fill will come off the top of the underground aquifer first; she questioned who would be affected. “We all know the person with the deepest straw in the margarita glass gets drunk first,” she said, prompting laughter.

Some information and numbers have changed since the first public meeting in March, leading to Marcus Walker of Chino Valley to question why the project now involves 3,000 acres, an increase from 350 acres. “Sounds like a land grab to me. You know what you’re doing, and you’re not giving us the truth,” Walker said, drawing scattered applause. “You’re blowing smoke. I don’t believe you.”

ITC Project Engineer and Director Brian Studenka said ITC can’t tell what the impact would be on the Big Chino aquifer because they don’t know what the capacity is at this time. He answered questions about loss of residential groundwater in private wells by saying that this issue is one he has heard repeatedly.

“Our challenge is to make sure that doesn’t happen,” Studenka said. “Don is working on that, whether there is a potential impact and how to mitigate it. We are not prejudging it. I think it will be a positive impact for the community and the river. If not, we’ll need to reevaluate.”

Wind, solar, natural gas, compressed air, chemical batteries, and mass transfer of weights for energy generation are not systems ITC is interested in, he said. Wind and solar, for instance, only generate and export energy, they can’t store it for later use.

ITC looked at more than 200 possible sites in the Southwest. Two in Arizona were in the top 10.

“This was nicely situated and the best site,” Studenka said, listing cost of land, access to the energy grid, suitable topography and the state’s renewable energy public policy. ITC has an option agreement to purchase the land. He couldn’t say whether or not the project would result in lower electricity bills for local residents.

In response to questions by Rep. Noel Campbell, Studenka said Salt River Project and the City of Prescott are two stakeholders giving input on the project.

“You’ve invested a lot of money. Then maybe you find an impact on water tables. You say you will mitigate, but by then the project is up and running,” Campbell said.

Studenka replied ITC would see how the water study goes and look at short-term and long-term options.

“If there’s a positive impact, we’ll go forward. If we determine there is a negative impact, we won’t proceed. We’ve walked away from more projects than we’ve proceeded with.”

Because of the timelines demanded by the Arizona Corporation Commission and FERC on the results of the studies, Studenka said ITC undertook those at its own risk.

Karen Coats of Paulden mentioned two earthquake faults, Big and Little Chino faults. Studenka said they were aware of both and moved the routes because of them. ITC will investigate whether it’s a fatal flaw or not, and design for all possibilities, he said.

Two people urged those in attendance to have an open mind. Joe Trudeau with Center for Biological Diversity acknowledged this is a long process, and advised the crowd that public participation impacts the integrity of the project.

“If science proves there are beneficial benefits, have faith in it. Ask hard questions. If you don’t trust their facts, pool together and hire your own consultant,” he said.

Dr. Peter Kroopnick of Citizens Water Advocacy Group (CWAG) said ITC had reached out to the group, and he believes the two organizations’ goals match each other.

ITC will review requests by stakeholders; those need to be received by Aug. 30. The stakeholder committee includes governmental entities such as the City of Prescott, corporations such as SRP and Arizona Public Service, businesses and organizations.

Feedback from other stakeholders, like those in attendance at the four community meetings, are recorded and also submitted. In addition, people can visit bigchinovalleyhydrostorage.com for more information, and email comments to bcvstorageproject@itctransco.com.