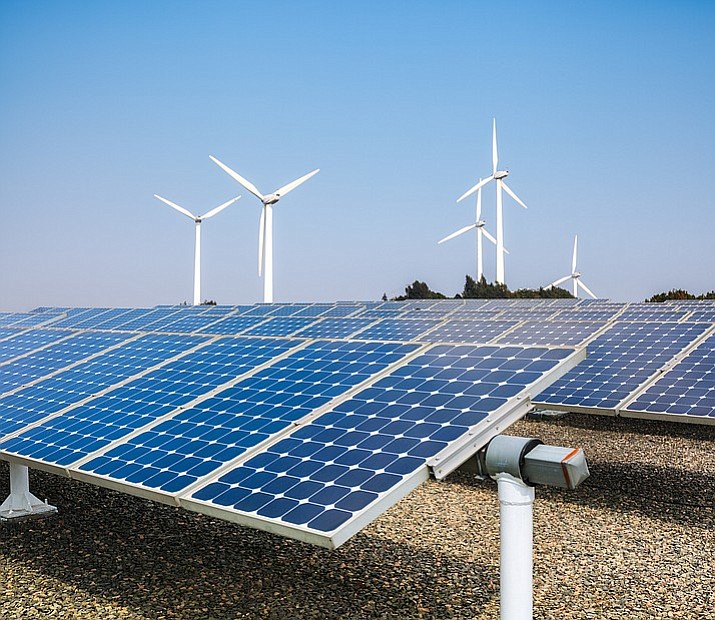 Clean Energy for a Healthy Arizona is seeking to amend the Arizona Constitution to require 50 percent of electricity generated by most power companies come from renewable sources by 2030. (Stock photo)

PHOENIX — The parent company of the state’s largest electric utility filed suit July 19 in a bid to block voters from deciding if they want to impose new renewable energy mandates on power companies.

In a 48-page complaint, attorneys hired by Arizonans for Affordable Energy, funded by Pinnacle West Capital Corp., claim a series of legal flaws with the petitions submitted by Clean Energy for a Healthy Arizona seeking to amend the Arizona Constitution to require 50 percent of electricity generated by most power companies in Arizona come from renewable sources by 2030.

Initiative backers submitted more than 480,000 signatures. They need for 225,963 to be found valid to get the issue on the November ballot.

But attorney Brett Johnson, in the legal papers filed in Maricopa County Superior Court, claims more than 195,000 of the names are from people who are not registered to vote in Arizona, and that nearly 75,000 signatures were submitted on petitions where there was a missing or improper notarization, something required by law.

Other issues include signatures that do not match and petitions that were circulated before initiative backers got the proper registration number from the Secretary of State’s Office.

“There are a laundry list of issues,’’ said Matt Benson, spokesman for the utility-financed effort to quash the initiative. “But the point is, even all of those issues aside, obvious blatant deficiencies account for more than 300,000 signatures and push them well below the minimum threshold.”

Pinnacle West and its wholly owned Arizona Public Service subsidiary, however, are not counting solely on trying to disqualify some signatures in their bid to show that there are not enough valid names left to put the issue to voters. Johnson has a laundry list of reasons that he says would entitle asking Judge Daniel Kiley to void the entire petition drive, arguing that signers did not know what they were supporting.

For example, he noted that the measure is titled the “Clean Energy for a Healthy Arizona Amendment.’’ But Johnson pointed out that the mandate for 50 percent renewable energy by 2030 specifically excludes nuclear energy, a particular issue for APS, which is the major owner of the Palo Verde Nuclear Generating Station west of Phoenix. He said that fails to acknowledge that nuclear energy generates about 20 percent of power in the United States with zero greenhouse gas emissions.

And Johnson said the wording fails to inform people that the initiative would apply only to investor-owned utilities and cooperatives — and not to Salt River Project, which is a municipal corporation and the second largest electric company in the state.

Rodd McLeod, spokesman for the initiative, acknowledged that not every signature submitted ultimately will be found valid.

“The reason we handed in more than double the required amount is because we understand ... that you’re going to have a certain number of them that come up wrong,’’ he said. “There’s always going to be mistakes,’’ McLeod continued.

That, he said, is the purpose behind the cushion.

“We are confident we have more valid signatures than the law requires and regard this lawsuit as foolish,’’ McLeod said. He called it 'a desperate attempt to deny choice on what kind of energy we want to have in the future.'

McLeod also took a jab at Benson who had issued press releases and posted claims on social media that the campaign had hired men with felony convictions for kidnapping, domestic violence, aggravated vehicular homicide, burglary, forgery and more and had these circulators on street corners, in front of public library and other places that where violent felons should not be hanging out.

Despite all that publicity, it turns out that even after the review of petitions by the utility-financed campaign, it was able to identify just 168 signatures on sheets circulated by what the lawsuit claims were 85 felons, or fewer than two signatures gathered per alleged felon.

“The people making this claim have no credibility whatsoever,’’ McLeod said.

One issue that could ultimately affect whether the initiative gets on the ballot is what Arizona courts rule is the proper standard for determining if they comply with the law.