Teachers statewide to join in walk-out 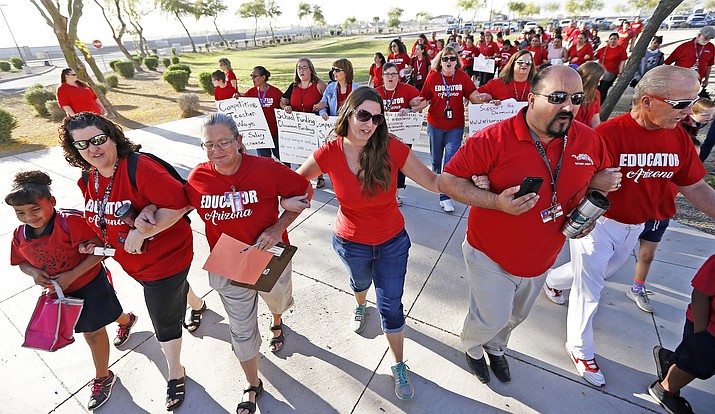 Teachers walk arm-in-arm with students and parents into Tuscano Elementary School as they stage a "walk-in" for higher pay and school funding Wednesday, April 11, 2018, in Phoenix. Teachers gathered outside Arizona schools to show solidarity in their demand for higher salaries staging "walk-ins" at approximately 1,000 schools that are part of a statewide campaign for a 20 percent raise and more than $1 billion in new education funding. (AP Photo/Ross D. Franklin)

Arizona educators have overwhelmingly voted to walk out to demand higher pay and more dollars for the classroom.

Speaking April 19 night in front of the Phoenix headquarters of the Arizona Education Association, organizers with Arizona Educators United, one of the grass roots groups backing the Red for Ed movement, said 78 percent of the 57,000 educators who voted supported the walkout.

The organizers cited 10 years of drastically underfunded schools that resulted in overcrowded classrooms, crumbling infrastructure and low wages for educators.

“After years of starving our schools, some classes are stuffed with kids while others sit empty because there isn’t a teacher to teach,” association organizer and Littleton Elementary School teacher Noah Karvelis said in a statement. “The #RedforEd movement has provided educators the opportunity to voice what action they want to take in an historic statewide vote.”

April 23-25, teachers will continue hosting walk-in demonstrations at more than 1,100 schools. But on April 26, many of those schools will shut their doors as a walkout begins. As state employees, teachers are forbidden to strike. Red for Ed leaders say a walkout technically is not a strike.

Before the vote, Mesa Public Schools Superintendent Michael Cowen sent an email to teachers saying the district’s 64,000 students would be shut out of school until teachers return to their classrooms. Other districts likely will follow suit.

Cowen cautioned teachers to think about the difficult decision during the voting process, which ran April 17-19.

“I encourage you to weigh the pros and cons of the impact of a walkout on our students, parents, staff and the community,” he said, adding that the public has shown support over the years for Mesa schools. “We have never lost a bond or override election. We need to be mindful of that support as decisions are made.”

Expect More Arizona, an education advocacy group, also released a statement, saying the organization’s leaders were “saddened that our teachers feel so disrespected and unsupported that they have chosen to walk out.”

The decision comes one week after Gov. Doug Ducey proposed a plan that would increase teacher salaries 20 percent by 2020. Advocates said the plan would help teachers but would not provide money for support staff, including counselors and janitors.

Ducey is holding firm on his pledge to not increase taxes, instead relying on the prediction of a strong state economy over the next three years to fund the pay increases. Some legislators have called his predictions optimistic.

The Legislature would have to approve funding for the plan.

After the April 19 vote, the Arizona Education Association called Ducey’s proposal disingenuous and said it wasn’t supported by actual funding.

Ducey responded to the announcement on Twitter, saying when teachers strike, “our kids are the ones who lose out.” The governor said he would continue to advocate for his proposal to increase teacher salaries.

Some educators said they were concerned about the lack of funding for support staff and for resources, including textbooks.

“Our kids deserve more spending per pupil so we can improve their education, get them up to date on the most modern technologies,” said Josh Rosenbaum, a reading instructor at Camelback High School. He said Ducey’s proposal “didn’t address all of our needs. Many teachers aren’t here for the 20 percent raise. They’re here for the students.”