Teachers plan to walk-out in Williams, schools to stay open 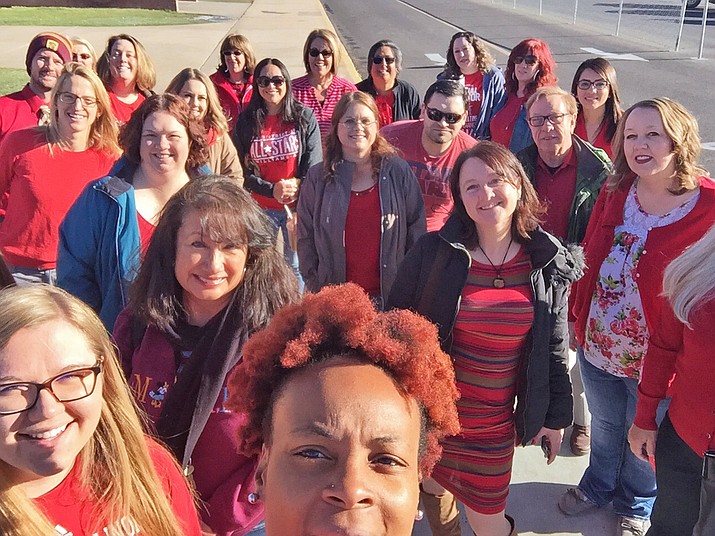 Teachers and staff from Williams Unified School District wear red and during a walk-in April 18 to raise awareness for the need for more school funding. (Submitted photo)

It remains unclear exactly how many Williams area teachers will join their Arizona colleagues in the first-ever statewide teacher walk-out, but according to Williams Unified School District Superintendent Rick Honsinger approximately 30 percent of the district’s teachers and several support staff have announced they will be walking-out April 26.

Honsinger said despite the teacher walk-out, the district will hold school as usual.

Supporters in Williams say the #RedforEd movement is not just about teachers receiving a pay raise, but also fixing a broken educational system funding model. One of the leading proponents of the local movement is Williams High School Counselor Jim Powers, who serves as a liaison for Williams teachers and Arizona Educators United.

“This is not just about salaries, we want to restore educational funding levels back to where they were in 2008,” Powers said.

Powers said the decision to walk-out has been difficult for most of the teachers and staff at the district.

“We don’t want to do it,” he said. “All of the teachers are struggling with it and saying ‘What about the kids?’”

But Powers said that reasoning has been used against teachers in the past.

“We as a group have told the governor that we were going to do it (walk-out) and he chose not to talk to us,” he said.

Power said he has observed first-hand in Williams the fall-out from years of education underfunding by the state.

“I see class size growing — we have some classes at 35-36,” he said. “I see teachers using their own money for supplies, and we have outdated textbooks. We are just bare bones.”

Powers said many of the teachers in Williams struggle to pay their bills too.

“It’s expensive here,” he said. “I see a lot of teachers with second jobs just to survive, and when they hold second jobs, that’s more stress and learning in the classroom goes down. They’re worn out.”

Several Williams teachers joined the #RedforEd walk-in prior to the strike vote to raise awareness of the funding situation.

The group of teachers, staff and community members were showing support for the #RedforEd initiatives, according to participant and teacher Louise Durant.

“Education is chronically underfunded. We want the legislature and governor to see that our community values education and wants it fully funded,” Durant said.

It is unknown whether any of the #RedforEd walk-in participants are planning to walk-out, but Durant said prior to the walk-out vote, the group was going to be visible every Wednesday in front of Williams Elementary-Middle School.

Powers met with teachers and staff April 23 and is planning to hold a community forum later in the week.

According to Ash Fork Unified School District Superintendent Seth Staples, he is unaware of any Ash Fork teachers planning to join the walk-out April 26.

Maine Consolidated School District Superintendent Mark Williams said he is addressing the situation with staff but does not foresee an interruption at the school.

“We plan to hold classes as usual with minimal disruption to education and student safety,” he said. “As an educational community we support #RedforEd.”

Williams said as this situation develops, updates will be available through social media, school website, and the all-call phone system.

“Though the concerns of #RedforEd are state wide, many in rural Arizona may feel a lack of influence at the legislative level. In conjunction with staff, parents, and the community, the MCSD school board will be looking at what we can do locally to address issues of compensation and funding,” he said in a post on the school’s webpage.

According to a post on the Arizona Educators United website, the group seeks a 20 percent raise for all teaching and certified staff in the 2018-2019 school year built into the salary schedule at the district level, mandated by the state.

They seek competitive wages for all classified staff based on the inflation rate of the previous year with an aim to pay job families competitively, and they want to honor years of experience in school district employment.

The group wants school funding to return to 2008 levels and decrease class sizes to 23:1, and they want new resources and curriculum for schools.

The group wants no new tax cuts until Arizona per-pupil spending reaches the national average. Tax revenue should be generated from sources that are generated within the state economy.

AEU also wants yearly raises until salaries reach the national average with steps based on years of experience with no compression or reduction of years that qualify.